Albert Einstein said that “Life is like riding a bicycle. To keep your balance, you must keep moving.” Veteran Donald Bowman has also found that, to keep moving, it helps to have a bicycle… particularly an e-bike. And to move faster and farther, it helps even more to have a fellow Veteran riding beside you.

Dreamed of serving his country as a Marine

Bowman began his military career in 1984, the same year the Marines used the recruiting message, “We’re looking for a few good men.” Bowman didn’t need an advertisement to convince him to enlist. He had dreamed of serving his country as a Marine for as long as he could remember. 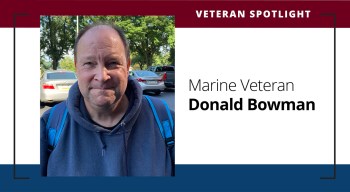 The Marines found what they were looking for when Bowman reported to Camp Pendleton. For the next four years, he proudly cried “oorah” from the kitchen where he worked as a food service specialist.

When Bowman transitioned from the Marines in 1988, he crafted a new recipe for a nice civilian life: attending school, working and traveling. But after Sept. 11, 2001, he decided he wouldn’t remain a civilian any longer. His country still needed him.

“It seemed like the right thing to do,” Bowman explained in his decision to enlist in the Pennsylvania Army National Guard. Despite joining a new branch, his act of selflessness upheld the original promise he made as a Marine: “Semper Fidelis,” or “Always Faithful.”

Bowman deployed to Iraq in 2009 as a motor transport operator. His new role demanded he learn an entirely different set of skills than those he had perfected as a Marine, but he was up for the challenge. He operated and oversaw Army vehicles that transported cargo and troops to advance American missions in Operation Iraqi Freedom.

After returning home, Bowman toured the VA Lebanon Medical Center for the first time with a group of fellow Veterans.Though he didn’t use VA benefits after separating from the Marine Corps, he learned about the expansive range of services available to him. This information proved important a few months later when he decided he needed support to address his homelessness and manage his drinking.

“They were able to provide help,” Bowman said, describing the VA medical team that facilitated his substance use treatment and the caring team of VA caseworkers from HUD-VASH. It’s a collaborative program between the Department of Housing and Urban Development’s Housing Choice Voucher rental assistance and VA case management and supportive services. 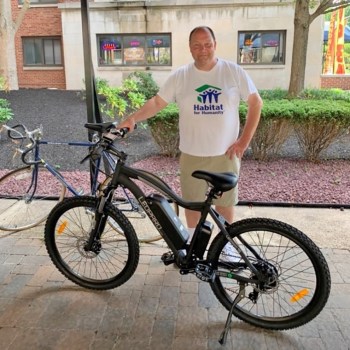 E-bike takes stress out of commute

After working with VA to get his drinking to a more manageable place and secure safe and affordable housing, Bowman felt VA’s support was a keystone in his successful transition to civilian life. He also found that some of the same VA staff members standing beside him had done so once before, in Iraq.

Together from deployment to employment

Bowman deployed to Iraq at the same time as VA social worker Randall Haines. Like Bowman, Haines decided he was not ready to stop serving after separating from the National Guard in 2010.

Haines excels at his job, helping Veterans like Bowman find their job. When Bowman felt he needed to sharpen his computer skills, Haines wasted no time teaching him how to update his resume and browse online job postings.

Bowman found a new job in security, one he still is enjoying today. But without a car, he was walking serious distances each day to and from work. When his phone rang, he was not expecting Haines to offer him a bicycle and especially not an electric bicycle, or “e-bike.”

Haines explained that, through section 4201(a) of The Johnny Isakson and David P. Roe, MD Veterans Health Care and Benefits Improvement Act of 2020 (Public Law 116-315), Lebanon VA had a unique opportunity to provide e-bikes to Veterans in need of transportation to get to work.

For Bowman, the e-bike has been instrumental in protecting his health. He reports getting more sleep, being less stressed about his commute, and having more time to spend doing the things he loves. (On Sundays, this includes cheering on the Pittsburgh Steelers and Penn State football teams.)

Bowman encourages all Veterans to reach out to VA: “See what they can provide for you. There are all kinds of programs. See if anything can help you out.”