An e-scooter rider was today jailed for 16 months after crashing into a 77-year-old woman as she crossed the road – sending her flying and leaving her with ‘physical and mental scars’.

Paul Satchell, 58, was fleeing police who had earlier questioned the way he was using the electric vehicle, when he crashed into Myra Wood in Bexhill-on-Sea, Sussex.

Ms Wood suffered extensive injuries including a fractured eye socket. The collision left her in hospital for two days and meant she was unable to eat solid food for six weeks.

Satchell was jailed for 16 months and banned from driving for almost four years at Lewes Crown Court today after admitting causing injury by dangerous driving in the December 2020 collision.

Shocking CCTV footage shows the moment the e-scooter menace mows down Ms Wood, who is now 79. 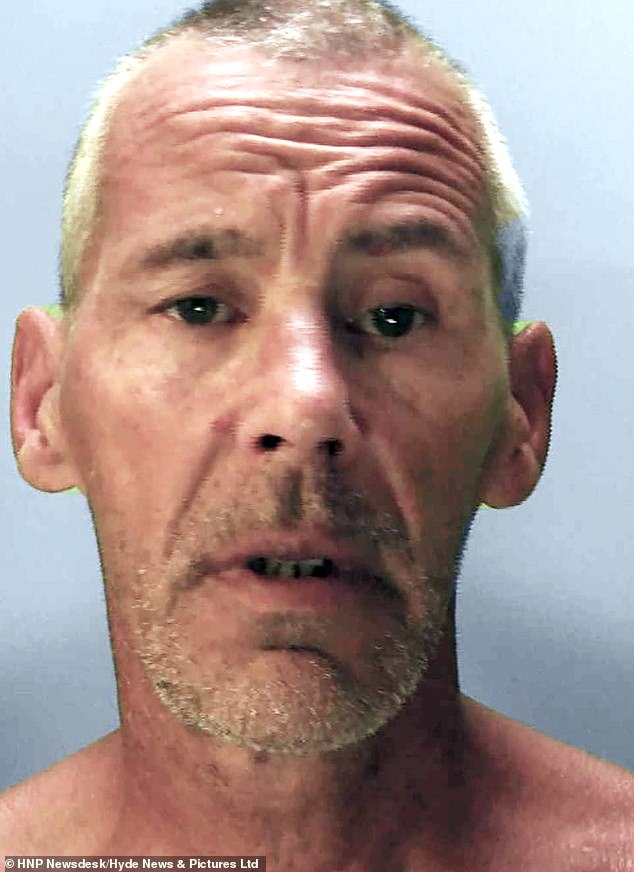 Paul Satchell (pictured), 58, was fleeing police who had earlier questioned the way he was using the electric vehicle, when he crashed into Myra Wood in Bexhill-on-Sea, Sussex 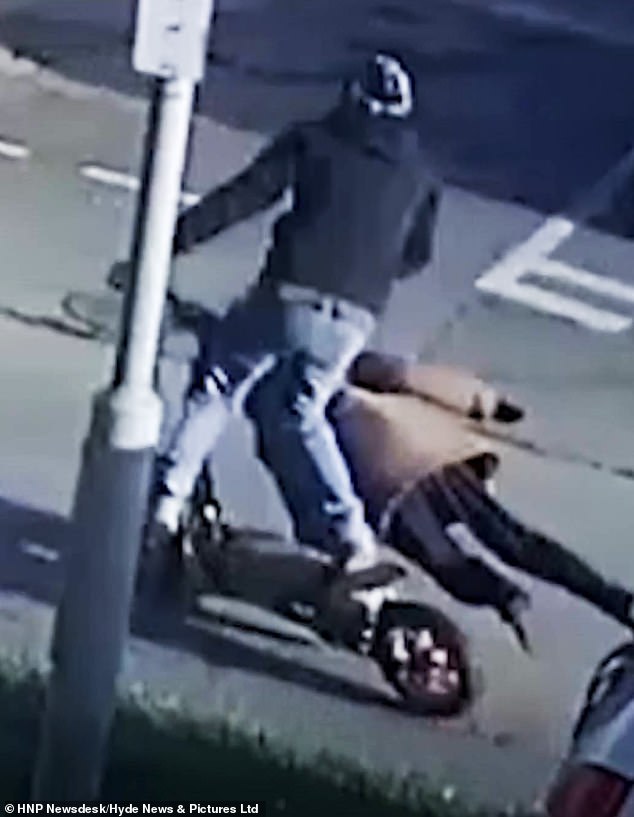 Shocking CCTV footage shows the moment the e-scooter menace mows down Ms Wood, who is now 79

The video shows Satchell travelling at a high speed on his scooter as his victim, wearing a brown coat, is walking past a car at a junction.

Satchell was trying to escape police officers who had stopped him earlier to give him a warning about the way he was using the e-scooter.

The clip from Sussex Police shows him looking the wrong way as Ms Wood crosses the road.

He hits her in a high-impact crash and within seconds she is sent flying before she falls to the ground and Satchell is knocked from his scooter. 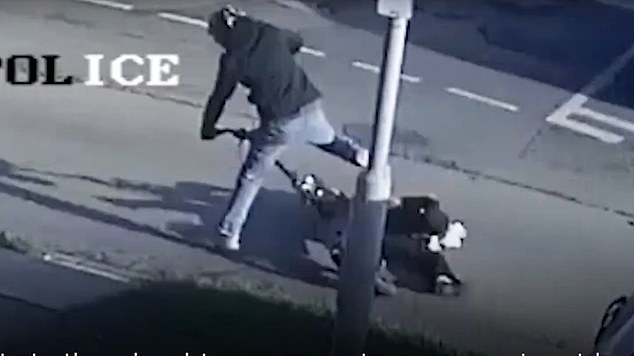 Satchell, who was jailed for 16 months at Lewes Crown Court today, also fell off his scooter

Ms Wood said: ‘I can say that this collision left me with physical and mental scars that have fundamentally affected my quality of life. I know I am a shadow of my former self’.

The Collisions Unit investigator said the footage ‘demonstrates the harm that can be caused by e-scooters’ and Ms Wood hopes the footage will warn others about the dangers the powered vehicles pose.

She said that she was very active before the crash, going for regular walks to visit the shops or go to church.

She has been left with extreme anxiety ever since and is now terrified to cross the road.

Ms Wood was sent flying in the crash before she fell to the ground. She said she has been ‘a shadow of my former self’ since

A spokesman for Sussex Police said that Satchell knocked down the pedestrian while trying to evade officers who had stopped him.

They said: ‘Paul Satchell had been stopped by Police constables Jason Kemp and Daniel Turk in Watermill Lane, Bexhill, after using the powered vehicle.

‘The officers were in a patrol vehicle that stopped to warn the 58-year-old that he need to stop riding but Satchell ignored them, turned away from the police and rode off. 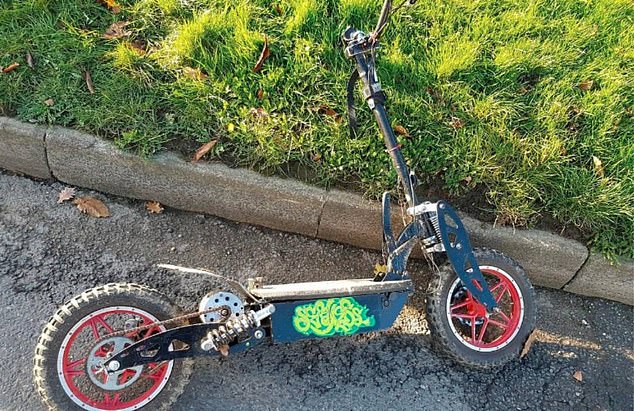 Sussex Police seized the e-scooter, which is illegal to ride on public roads if it is not rented

‘He paid no attention to what was ahead of him. Myra Wood, now aged 79 years, was crossing the road when she was struck by Satchell who was riding at speed and looking back to the police officers behind him.

‘She was knocked over and suffered extensive injuries in the collision, including a fractured eye socket. Satchell was also thrown off his vehicle but was uninjured.

‘Pc Kemp and Pc Turk immediately provided first aid to Mrs Wood and arrested Satchell. They seized his e-scooter and obtained witness details and CCTV, which showed how the shocking incident unfolded.

What are the laws on e-scooters?

Renting an e-scooter is the only way to legally ride the vehicle on some public roads or in other public place at the moment.

But the controversial vehicles could be approved for use across the UK following a trial period. Currently, 10 London boroughs are taking part in the scheme with three providers to test how e-scooters work on the capital’s roads.

Riding e-scooters on the pavement however is banned, and riders must be 18 or over and have a full or provisional driving licence to rent one.

It is also illegal to use privately owned e-scooters or other powered transporters on public roads.

Relevant laws on e-scooter use include:

On public roads, anyone using a privately owned e-scooter or other powered transporter is likely to be committing at least one of a number of offences such as driving a motor vehicle with no insurance. You could be liable for a fixed penalty of £300 and six points on your driving licence

On pavements, it is generally an offence to drive a motor vehicle, and this applies at all times to e-scooters and powered transporters

E-scooters rented from the TfL scheme will be permitted to ride on London’s public roads and cycle infrastructure in participating boroughs.

These boroughs will designate no-go areas where e-scooters cannot be ridden and will come to a safe stop, as well as go-slow areas, where the speed of e-scooters will be reduced to 8mph

‘E-scooters are currently classed as a powered vehicle but there is currently no way to legally register or insure them.

‘So riding e-scooters in a public place is illegal and users can face having the item seized, and being prosecuted for motoring offences.

‘Satchell, of no fixed address, was charged with causing serious injury by dangerous driving and a Lewes Crown Court he was sentenced to 16 months in prison.

‘He was also disqualified from driving for a further three years and eight months.

‘Myra Wood, who was aged 77 years at the time, agreed to footage being shared to warn other e-scooter users about the dangers the vehicles pose to others and to remind them that the items are illegal to use on a public road or path.

‘She said she previously enjoyed an active life with regular walks and visits to the shops and to church in Bexhill and Sidley. However, the injuries she suffered left her in hospital for two days and she was unable to eat solid food for six weeks.

‘She was left with extreme anxiety and said she felt terrified to cross the road.

In April 2020 Satchell was arrested after ‘taunting’ police officers who fined him for ‘overexercising’ by paragliding during lockdown.

He spotted police officers after completing a glide and deliberately walked in their direction, giving them a thumbs-up.

Officers chased down Satchell, known as the ‘Bexhill Birdman’, as he ran away before he was tackled to the ground.

Speaking after the e-scooting incident from December that same year, Collision Unit investigator Chris McGuckin said: ‘This was a particularly unusual case in as much as it was an e-scooter that was involved.

‘We could only charge Satchell if it was established that the e-scooter was a ‘vehicle’ within the meaning of the Road Traffic Act.

‘The quick actions of PC Turk and Pc Kemp to seize the e-scooter and then the examination and photographs taken by Pc Dave Upjohn from our Roads Policing Unit, ensured we were able to show this was a ‘mechanically propelled vehicle’ to the satisfaction of the CPS.

‘Satchell at first pleaded ‘not guilty’ to the charge and the matter was sent to the Crown Court for trial. However, he failed to attend court on several occasions. Warrants were issued for his arrest. When he was arrested and appeared in court, the evidence was so strong that he had no choice but to change his plea to guilty.

‘We are pleased that we could at last get justice for Mrs Wood with the 16-month prison sentence. The case shows that all road users have an obligation to pay attention and be aware of others on the road to prevent causing serious harm.

‘It also demonstrates the harm that can be caused by e-scooters, which are still illegal to use in public outside of a trial area.’