While acceptance of e-bikes has been slower in the UK than the rest of Europe, businesses like The Electric Bike Shop have carved out a place as e-bike specialists. Commercial manager Iwan Jones explains how the chain hopes to continue its rise

How has The Electric Bike Shop expanded in the past few years?
We’ve been selling electric bikes for a number of years. We started in 2014 as eCycle UK in Stroud, Gloucestershire. In the last two years, we’ve opened six new stores, up and down the country.

The newest of these is in Harrogate which opened in February this year. Its opening brings our number of stores up to nine in total. It doesn’t stop there though, as we’re due to open another shop in London very soon and have our eyes on a handful of other sites in towns where we don’t yet have a physical footprint.

Our website and telesales are going from strength to strength, and we have ambitious growth plans for both of these very important channels for 2022. We’ve held off doing this until now because we wanted to grow our national network first to enable us to be nearby to support our customers nationally and in person.

E-bikes are the current major growth area within cycling, and this undoubtedly works in our favour. But I think the main reason we at The Electric Bike Shop have seen such strong recent growth is down to our relationships with our customers, we need for our business to flourish.

We know that if we create what is best for the customer, it is generally the best thing for us and in turn also for our suppliers. Our customers are absolutely at the heart of our business processes, and this heavily steers our decision making.

We’ve built a very special team around us at The Electric Bike Shop. We’ve got a tight-knit group of talented colleagues from both inside and outside of the cycling industry. Everyone who’s in it really senses that we’re onto something quite special here, which is very exciting. 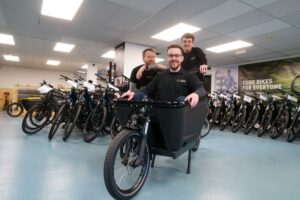 How have consumers reacted to the emergence of e-bikes?
Those that have tried an e-bike generally want one and those who then understand all of the potential benefits end up wanting one even more: fitness, freedom, activity, fresh air, using the car less, saving money etc.

Growth-wise here in the UK we’ve been a bit slower to adopt e-bikes in comparison to mainland Europe, but at The Electric Bike Shop, we’re confident that the trend here will match the growth model we’ve seen across the channel.

What are your thoughts on the response to e-bikes in the wider bike trade?
There are many factors at play here. Other retailers have gotten involved with e-bikes to varying degrees. From fully embracing and championing them like us at The Electric Bike Shop, all of the way through to complete avoidance at the other end of the spectrum.

In some cases, perhaps a low e-bike representation within a sales floor could be down to stock availability, but there are ways around this – we’ve managed to keep our floors full. I imagine that some retailers have concerns over committing cash flow to electric models for the fear of the unknown or the belief that e-bikes are just a fad.

Perhaps a handful of retailers are concerned about how they would manage aftersales and servicing without the correct equipment and training. There will be some cycling purists out there who wouldn’t entertain putting an electric model on their sales floor based on their own personal views.

I think there has been an understandable tentativeness about committing to a strategy in the past few years, as there have been so many curveballs and changes thrown at everyone. Either way, we’re 100% electric, we’re fully committed, and it’s working for us.

How do you see the e-bike market changing in the coming years?
In short, it’ll get a lot bigger. There are still so many people who’ve not yet experienced that e-bike smile so we are doing our best to spread the word about the countless benefits e-biking can bring.

We’re reaching out to our local communities and working with them to spread the word. Undoubtedly the technology will get even better in time and e-bikes will become more mainstream. We believe that e-bikes will become the norm, not a quirky option as they may have been perceived in the past and we see ourselves as an important part of this transition in mindset.

During the pandemic, we began to recognise new customer profile groups and we made sure our store colleagues recognised them so we could match their service requirements and provide the very best assistance to them.

Groups such as the commuter needing to avoid public transport, gym-goers that were seeking an alternative workout, holidaymakers switching to active staycations and mountain bikers wanting to try the unique thrill of an electric model.

More and more customer groups will follow, evolve and grow. The future looks really bright and we’re putting ourselves right in the middle of the action.