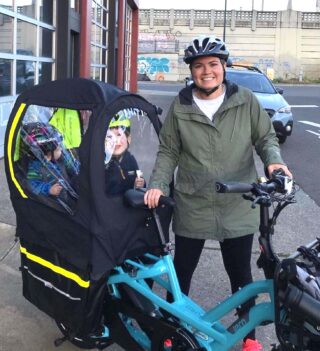 Electric cargo bikes are quickly becoming the vehicle of choice for many Portland families. The other day when I pulled up to a local high school’s bike parking, I saw two Tern cargo bikes already parked (I was on one too!). I later learned both were owned by the same family. They had bought one for dad and one for mom.

Despite the fact that, unlike e-cars, e-bikes have almost zero marketing footprint and get no government subsidies, sales of these remarkable vehicles is skyrocketing. We don’t have Oregon-specific numbers, but nationwide e-bike sales have grown a whopping 240% in the past 12 months. Suffice it to say there is a revolution happening in how people get around and it’s being driven almost completely by organic demand.

Unfortunately, one of the barriers to hopping on this exciting transportation trend is cost. Americans are conditioned to see bicycles as a cheap option, and e-bikes come with sticker shock for many people. There are lower-priced brands out there, but to get something that’s reliable, high-quality and feature-filled, you’ve got to spend about $3,000. Eventually we’ll have government programs to help folks purchase these bikes (some states already do!), but for now the potential of e-bikes will be limited to those who can afford it.

But there’s another option! Financing.

That’s the path Oregon State Representative Karin Power just took to buying a Tern GSD (retail around $5,000) e-bike for her family. Power, a Democrat who represents Milwaukie and parts of southeast Portland, recently shared her story on Instagram:

“Meg [Power’s partner] and I have wanted to transition to a more fun and environmentally-friendly form of transportation for a long time, but it can be really expensive to make the switch. Not only that, it has been really hard to find the time to exercise. Who knew working a full-time job and raising two kids during a global pandemic could be so demanding?

Luckily for us, Splendid Cycle worked with Unitus Community Credit Union to create a bike loan program that makes buying an eBike a lot like buying a car and doesn’t require outstanding credit. We were able to secure a 3-year loan on the eBike with a monthly payment of about 180 dollars (which ends up being just a bit more than what we spend monthly on gas for our old Subaru).

Making healthier choices doesn’t mean you have to break the bank. I’m really grateful for the folks at Splendid Cycle who worked with our family to help us make the switch. I’ll be posting more about what it’s like transitioning to an eBike in the future!”

There are several local credit unions that offer bicycle loans. We’ve reported on them and Splendid Cycles lists a few of them on their website. Most Portland e-bike shops offer some sort of financing. The eBike Store in Piedmont has it. So does Clever Cycles on SE Hawthorne and Pedego on NE Martin Luther King Jr Blvd.

It’s great to see so many families use e-bikes instead of e-cars — especially when they happen to be a mayor or in the case of Rep Power, a member of a powerful transportation committee.