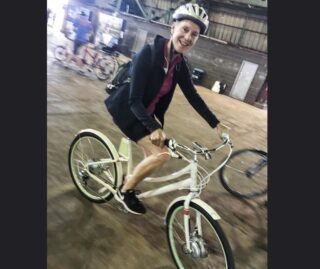 Metro Councilor Shirley Craddick and her e-bike at a 2017 ride.
(Photo: J. Maus/BikePortland)

Oregon is home to many electric bike businesses and believers. But so far, the revolutionary vehicles have failed to crack into the mainstream political discourse. Now a group of e-bike advocates will take concrete steps to change that by getting legislators and policymakers into the saddle.

Electric Bikes For All (EB4A) is a group that’s been meeting since 2019. It started informally thanks to leadership from Joseph Wachunas, program manager for Forth, a nonprofit working to boost electric vehicle use and policy in Oregon. Wachunas shared with BikePortland that EB4A first got together to plan an electric bike expo event. Portland hosted a successful e-bike expo in 2016, but it was cancelled in 2017 when “solar eclipse mania” swept the region and organizers had trouble finding necessary equipment to host the event.

EB4A had their sights set on 2020 as the relaunch date of the e-bike expo, but of course the Covid-19 pandemic scuttled that plan as well. Undeterred, the group continued their monthly meetings. The group has grown considerably in the past year and their full meetings usually consist of presentations from experts in the field and discussions about legislation and strategies for how to increase e-bike use among Oregonians. It’s a diverse group of members — from climate activists who see e-bikes as a crucial tool in reducing greenhouse gas emissions, to e-bike researchers and retail bike shop owners. “It’s a way for all of these different interests to align and talk about what’s going on,” Wachunas said. “It’s a forum for all of us to work together to advance e-bikes across the state.”

The group is sorely needed because e-bikes don’t have nearly the political or media heft of electric cars and trucks — or the attention-grabbing Arcimoto three-wheeled EVs made in Eugene. Just this morning Oregon Governor Brown tweeted about EVs and mentioned cars, trucks and “fun utility vehicles”; but she didn’t mention bikes.

A new initiative by EB4A to host e-bike rides with Oregon lawmakers will be their most ambitious project yet. Besides educating electeds on e-bikes and how fun they are to ride, their goals are to make sure the lawmakers recognize the utility and relevance of e-bikes in their districts, that there’s an advocacy group ready to help support new laws that remove barriers to e-bike adoption, and of course to get some great photos and content for Instagram and other platforms that will spread the love even further.

The first rides are being planned for this fall and so far volunteers have stepped up to plan events in Portland, Hood River, Bend and Eugene. The Portland event will start and end at the Portland Aerial Tram where Go By Bike already has an e-bike test ride facility in place.

If you’d like to learn more about E Bikes For All, check them out on Google Groups.