Miles of North Coast hills and grasslands are set to open with hiking and biking trails next year at the Cotoni-Coast Dairies National Monument. (Grey Hayes — Contributed)

DAVENPORT >> More than nine square miles of rolling grasslands and windswept hills on the North Coast are set to open to the public next year at the Cotoni-Coast Dairies National Monument, but a few recent appeals to a Bureau of Land Management plan could change the way the land is used.

This recent addition to the California Coastal National Monument is about 15 minutes’ drive north of Santa Cruz, from Laguna Creek to just north of Swanton Road near Davenport. After years of preparation, the Bureau of Land Management now plans to open the property to hiking, mountain biking and horse trails in the summer or fall of 2022.

Santa Cruz Mountains Trail Stewardship, formerly known as Mountain Bikers of Santa Cruz, was hired to build 27 miles of trails for the agency. The group plans to raise $3 million to complete the project.

Some county residents are excited for the new access, but some North Coast farmers and other residents fear that the plan inadequately prepares for visitors’ impact on traffic, agriculture and wildlife. Appeals were filed with the Bureau of Land Management by its late July deadline.

One of the major complaints is the bureau’s proposed locations for parking lots and their potential impact on habitat and residents. One parking lot is slated to be built in a watershed at the proposed southern entrance of the monument near Laguna Road. Another lot is planned near the Cemex cement plant that closed in 2010. A third seasonal parking lot will be located on a plateau at the top of Warnella Road, according to Bureau of Land Management documents. 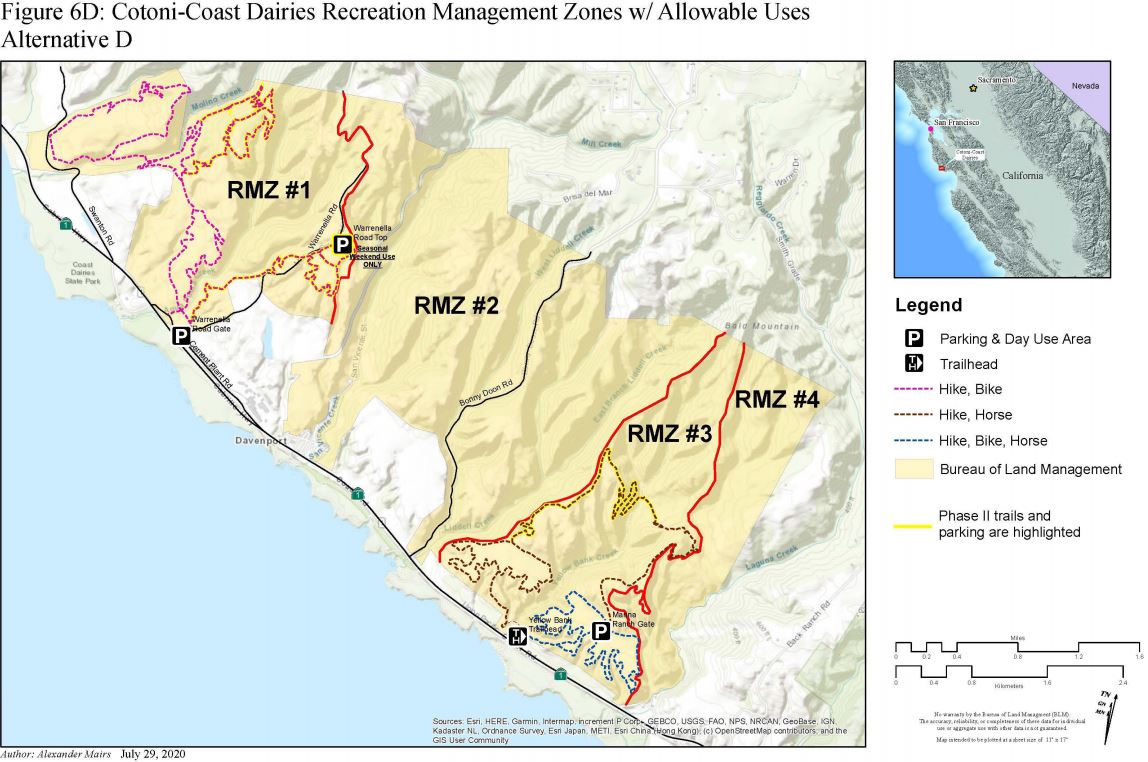 The timeline to open in 2022 will depend on the volume and scope of the appeals, said Ben Blom, the field manager at the Bureau of Land Management’s Central Coast Field Office. The federal Interior Department of Appeals is expected to review the appeals.

Attempts to open the Cotoni-Coast Dairies land to the public have been in the works since at least 2017. The Trust for Public Land gave the property to the Bureau of Land Management in 2014, but the bureau decided to delay plans for recreation and public access until it was added to California Coastal Monument land. That happened during the final month of the Obama administration.

The nearly 6,000-acre property rises steeply from Highway 1 into wide-open grasslands interspersed with wooded ravines. The property boasts six forested perennial streams which are lifelines in the dry Mediterranean climate that defines the area.

The monument is a biodiversity hotspot and a refuge for native Central Coast plants and animals. California red-legged frogs and mountain lions are on the land, and coho salmon and steelhead trout are in the waterways, Bureau of Land Management leaders said. Cultural and archeological sites important to Amah Mutsun Tribal Band also are on the property.

Blom, the bureau field manager, said its plans allow for recreation while trying to safeguard cultural sites and set aside more than half of the property for conservation.

“Recreation on the property will provide opportunities for exercise, challenging trail features, world class vistas, nature viewing, bird watching and photography,” bureau representatives wrote in a June statement. “A phased approach to recreation development will help protect the property’s sensitive biological and cultural resources. The plan identifies half the area as core habitat for fish and wildlife that will have limited recreational access.”

The Bureau of Land Management released its final management plan for the property in June 2020. It opens the north and south ends of the monument to biking, hiking and horseback riding.
It also allows prescribed burns and other efforts to help reduce wildfires. Livestock grazing is expected to continue on more than 2,000 acres, bureau representatives said.

On a recent visit to the property, Grey Hayes pointed out a northern harrier hunting in a field near the proposed southern entrance parking lot. The northern harrier, an owl-like bird of prey, is on a list of species of special concern in California largely due to habitat degradation.

Hayes has grown tomatoes at Molino Creek Farm near the Bureau of Land Management property for many years. Hayes said northern harriers are one of many species that will be badly affected by the Bureau of Land Management’s proposed opening. The monument is home to other sensitive species such as mountain lions and the endangered grasshopper sparrow. Hayes said the bureau could limit the impact to these species by relocating parking lots and building trails around the edges of their habitats. “They haven’t thought this out at all,” Hayes said.

He said the plan cuts through sensitive ecosystems. He fears that wildlife could be spooked and precious plant habitat could degrade. 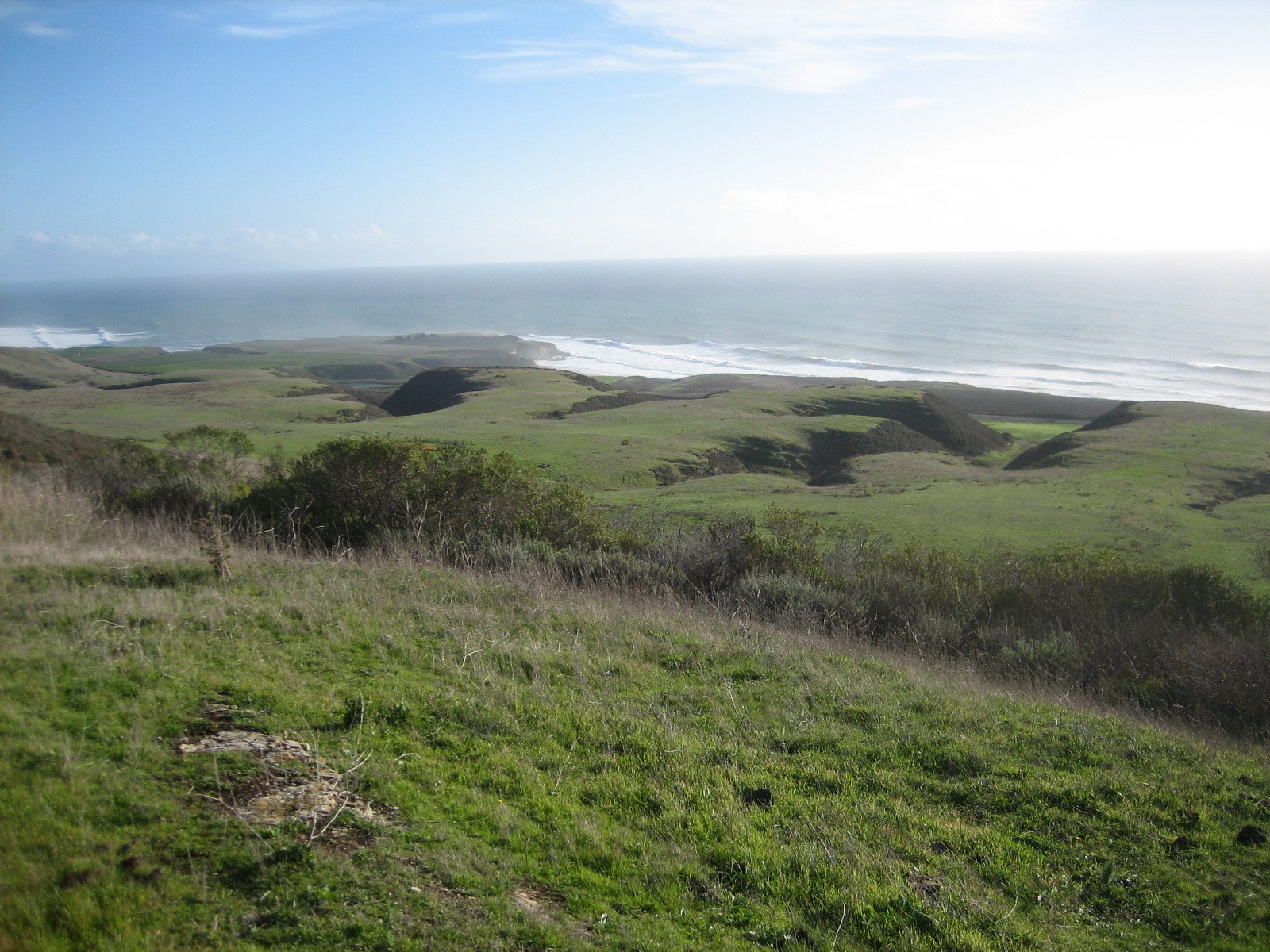 Brain McElroy of the Davenport North Coast Association, a nonprofit group that connects North Coast residents, said this month that he planned to submit a joint appeal with the preservation group Friends of the North Coast to relocate the northern parking lot.

The association hopes that the Bureau of Land Management will build the parking lot a few hundred yards away at the base of a ravine off Cement Plant Road. McElroy said it would keep the lot out of view from Davenport residents and help manage traffic.

In response, Blom said traffic to the northern entrance would remain unchanged since the entry point of Highway 1 would be the same regardless of the lot’s location. Blom added that a new site would compromise the integrity of a historical cheese barn that the bureau hopes to restore for educational purposes.

Under the current proposal, landscaping is expected to be planted around the proposed parking lot to keep it out of view of residents.

Blom adds that the site proposed by the Davenport North Coast Association is located within a sensitive wetland. McElroy is doubtful. “It’s full of cow manure,” he says. “The cattle operation has beat the wetlands into oblivion.”

The northern parking lot has been an ongoing issue since the Bureau of Land Management first started planning to open the park. Blom says that the current proposal is built to address these concerns. That sentiment, however, is not shared by the Davenport North Coast Association.

“We feel like our concerns have not been met throughout the process, so the appeal is a last-ditch effort,” McElroy said. “We’re not fighting the opening of the monument. We’re just trying to get some compromises.”

At least one other group is wary about electric bikes on the property.

It helped lead the campaign for national monument status for Cotoni-Coast Dairies.
Motorized vehicles were not permitted on trails as part of the site’s original designation, Barth said. Giving electric bikes a pass could increase traffic to otherwise remote areas of the park, she said.

The Sempervirens Fund is also concerned about details of the bureau’s decision to allow archery-only hunting. The group said it worried about safety and a lack of information on the number of hunting days and the species that will be targeted.
Barth added that the dirt road to the proposed southern parking lot cuts a cattle pasture in half. Leaders of the Trust for Public Land, which did not include the field when they donated the rest of the property, have said they will not allow the bureau to use the road. This issue raises questions about what the agency will do if it is denied the proposed southern entrance point.

Still, Barth said this month that the Sempervirens Fund did not plan to submit an appeal.

“The planning process of the last year comes at the heels of decades of effort to get this property both conserved and opened,” Barth said. “This plan is a good foundation. Now the details are going to be what matters.”

Become a member of Santa Cruz Local, an independent, community-supported newsroom that’s owned and led by local journalists. Our stories are free and always will be, but we rely on your support.