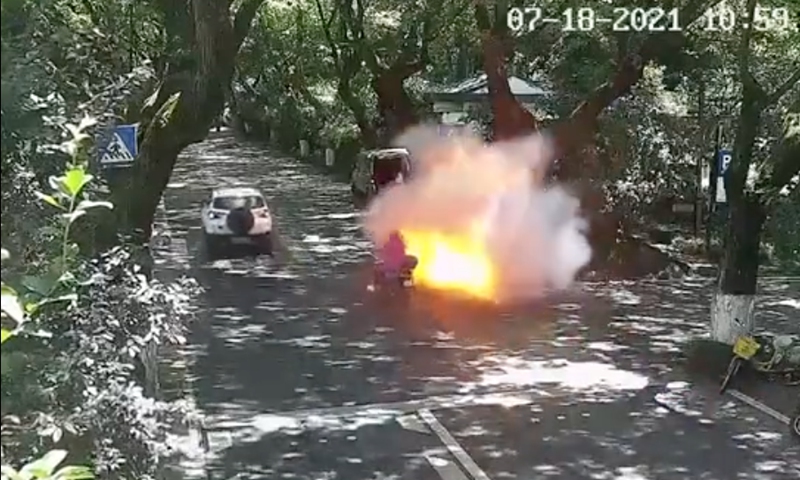 An electric bike spontaneously combusted on the road in an East China city on Sunday, leaving the rider and his daughter in a critical condition, prompting an urgent investigation in over 2,000 electric bike stores in the city.

According to Zhai Xiaojuan, Wei’s wife, who was riding another electric bike behind Wei, the bike suddenly exploded without hitting anything. The bike was bought at a brand store about two or three years ago. Her husband spent about 500 yuan ($77.18) and changed the bike’s battery (using the same brand) only last year.

Since it is difficult to estimate the cost of treating the two family members, the family launched a crowdfunding campaign. As of 10 am on Monday, the campaign had raised 2 million yuan, the estimated cost of treatment.

Hangzhou residents spontaneously relayed the message to others to join the crowdfunding efforts.

According to the Xihu branch market watchdog in Hangzhou, the authorities will investigate the incident and find out whether the bike was a 3C (China Compulsory Certification) certified product. The authorities will conduct a comprehensive inspection of electric bike sales and maintenance businesses within its jurisdiction.

The self-examination requires the store to sell products in line with 3C standards; it is strictly prohibited to refit electric bikes, and all lithium batteries must be stored separately.

On April 15, China started implementing new national standards for electric bicycles, with market regulators nationwide being asked to step up management of compulsory certification for electric bicycles, according to a document jointly issued by the State Administration for Market Regulation, the Ministry of Industry and Information Technology and the Ministry of Public Security.

Meanwhile, communities across China have tightened local bans on electric bicycles in elevators and residential buildings after the explosion of a bike’s battery inside an elevator in Chengdu, Southwest China’s Sichuan Province on May 10, which injured five people, leaving a 7-month-old female infant with a permanent disability.

Cities such as Beijing and Shanghai have even resorted to using smart devices to ban electric bikes in elevators and residential buildings.