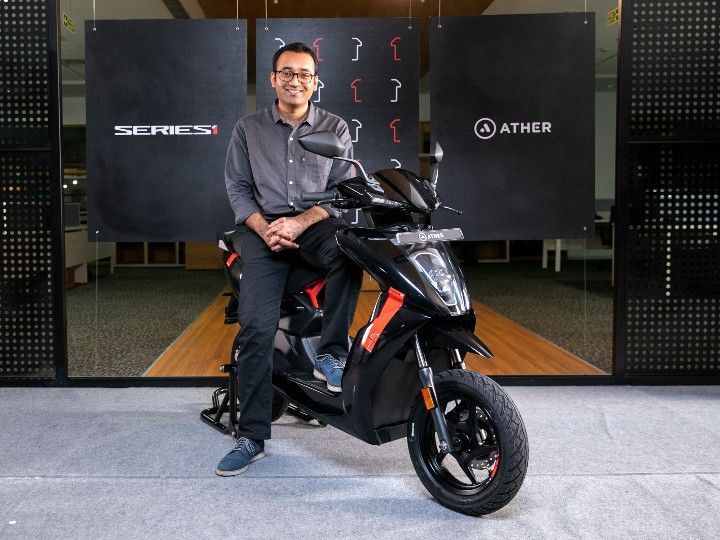 Ather Energy’s products have pretty much been the benchmark in the Indian electric two-wheeler space, ever since it first launched its scooter, the Ather 450, back in 2018. The company has reached new heights with the Ather 450X and the subsequent market expansions have truly put them on the path to making them a household name. We caught up with the man behind it all – Tarun Mehta (CEO and co-founder), recently, and learnt a great deal about what’s next for the Bengaluru-based EV maker:

With the revised FAME II incentives coupled with additional state subsidies (that vary depending on the state), the prices of several premium electric two-wheelers have gone down below the psychological barrier of Rs 1 lakh. Even though Ather Energy’s products have been on the higher end of the spectrum, the price of its relatively more affordable variant, the Ather 450 Plus, has gone down to Rs 1,13,416 in Delhi. This certainly begs the question: Does Ather see a market in the sub-Rs 1 lakh category now?

Tarun says,”100 percent. I think there’s a market at every price point”.  “Whether Ather will build or not? Let’s see…” He explains that it’s no longer a price point that’s impossible, but, he says, “…I don’t want to basically get into price wars, I don’t think it makes sense to set the market up with a price point that you can’t long-term defend or build a business on.”

Tarun believes with the introduction of CAFE (Corporate Average Fuel Efficiency) norms (from April 1, 2022), the prices of petrol-powered scooters are bound to go even further up. This coupled with the rising fuel prices have made electric scooters a lot more attractive. He says Ather wouldn’t rule it out but the company wants to wait until it’s present in more cities. This way, Ather will also be able to connect with more consumers and understand the market requirement better.

Ather plans to bring out more variants at different price points in the future, with some at an even lower price point compared to its existing offerings. Expect the EV maker to launch a sub-Rs 1 lakh variant by next year. It should go up against the upcoming Ola Electric, Bajaj Chetak and the TVS iQube Electric.

The Ather 450X is by far the most feature-packed electric scooter in its segment. Tarun says the 450 platform is meant for the brand’s performance scooter offerings. So the upgrades to the Ather 450X will be focused around performance.

Tarun believes the Ather 450X could be enhanced with ABS, a better regenerative braking system with superior braking prowess, and more importantly a higher top speed (that can be sustained over a longer period of time). He essentially wants to improve the core product handling and ride experience of the Ather 450X.

All these upgrades sound quite feasible for a manufacturer as competent as Ather Energy. So it is safe to speculate that the brand could offer these features in the future either in the guise of new variants or as an update to the Ather 450X itself. Either way, the future certainly looks green for Ather!