One designer has found a way to create an electric scooter frame from nothing but recycled plastic. Yup, you read that right, only recycled plastic. Even though some components on the scooter are not recycled or recyclable, the fact that the entire frame is nothing but good ol’ reused plastic means a reduction in CO2 emissions that normally spark from the production of such devices and plenty of plastic off the streets.

The idea came about from one Juanjo Villegas, a student from Mexico City, Mexico. Seeing a massive surge in urban mobility vehicles in his city and an alarming output of CO2 emissions yearly, Villegas decided to make a difference. Thus, Plastic Ride (PR) was born.

With the help of a project team, the crew realized the next possible eco-friendly solution for urban mobility. After trials and errors, the team finally arrived at its fourth and current prototype, one that is fully functional.

To build each scooter, the designers have a close relationship with the automotive industry and thus are supplied with high-grade plastics. How good? Well, according to the designers, the PR is capable of withstanding up to 320 kg (705.5 lbs), data that’s been validated by Solid Works 2020. That’s more than what some steel and aluminum frames can take. One benefit of using plastics from the automotive industry is the quality of said plastic. Here, nylon 66 or polyamide plastics are used, hence the strength of this little machine.

The way the scooter is constructed is rather simple and easy, all the better in case someone wants to buy the rights to it; that makes for an easier production line and shorter construction time. Just so you know how fast, the team reports a manufacturing time of just three minutes. That’s with melting, pouring, milling, bolting together, and adding final components.

One thing the team focused on was how to reduce as much unnecessary equipment as possible. In doing so, only a motor, battery, brakes, bolts, wires, and a small display are the only components not composed from recycled plastic. Oh, and the seat as well.

As it stands, the PR can reach a speed of 20 kph (12.4 mph) due to a 350-watt motor and has a range of 15 km (9.3 mi). Sure, it’s not much, but it’s just perfect for a last-mile solution or a scooter design meant to be the next ride-sharing device for your city. One feature to sustain the last-mile idea is the scooter’s ability to fold and fit into the trunk of the most basic car.

To power these goods, a battery is needed. Housed in that bulky horizontal section between seat and handlebars, a 36V, 4400 mAh battery that can be recharged in just two hours. It can even be taken as a clear indicator of ridesharing applications but can also be used in fleet mobility.

However, urban mobility isn’t the end of it; some images reveal that this scooter is also capable of some mean work, including pulling a trailer. So that fleet mobility idea isn’t looking so far off the mark.

Ok, so it’s not 100% eco-friendly, but it is one darn good step in the right direction. Think about it, even if a component gives out, the Plastic Ride can go through the breakdown process again and be reborn as something else make of this sort of plastic. I hear people are also making homes from this kind of stuff, or something similar. 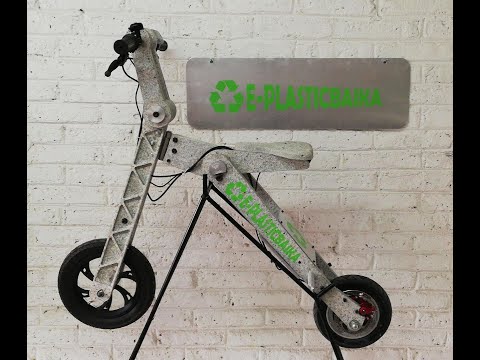