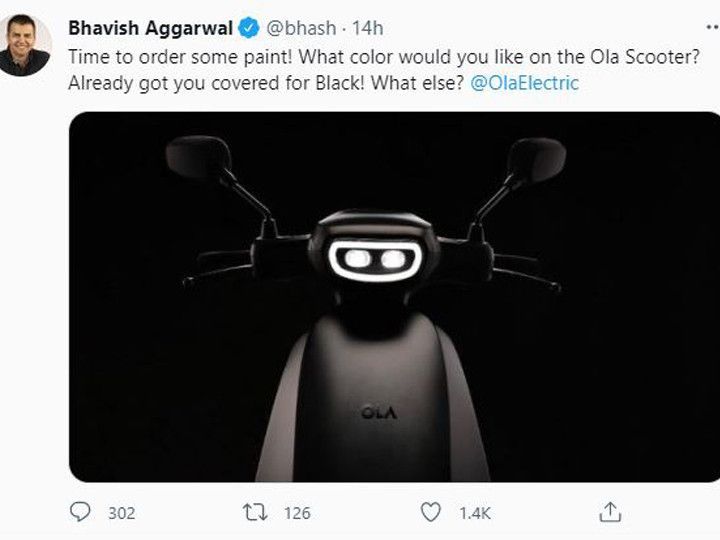 Ola Electric seems pretty close to realising its ambition of taking the electric two-wheeler segment in India by storm. The company is currently in the midst of choosing a colour palette for the e-scooter, indicating that it is inching closer to the official launch date. We reckon this will take place in the next couple of months. The revelation comes directly from Bhavish Aggarwal, Co-founder of Ola Cabs.

As per the strategy, Ola intends to roll out an e-scooter every 2 seconds through its ginormous mega factory with an annual capacity to produce 2 million units. The facility is spread across 500 acres in Tamil Nadu.

The company is also working on setting up a network of 1 lakh hypercharging stations across 40 cities. The initial phase will include setting up 5,000 charging points across 100 cities within the first year. It will target locations like parking lots, IT parks, colleges, and malls — areas that are easily accessible to the general public. The charging process will be cashless and completely digital.

Ola claims its scooter can be fast-charged from 0-50 percent in just 18 minutes, which will be enough for a 75km ride.

Despite the pandemic, Ola seems unfazed, which goes on to show how serious it is about its EV endeavours. We can’t wait to sample the scooter as soon as it’s out. After all, we’d be riding the future of mobility. Expect Ola to price the scooter competitively (around Rs 1 lakh) thanks to new Fame-II incentives announced by the Centre. This will put it in a better position to take on the Bajaj Chetak, TVS iQube Electric, Ather 450X, the upcoming Simple Energy Mark 2 and similar ICE-powered rivals in its segment.