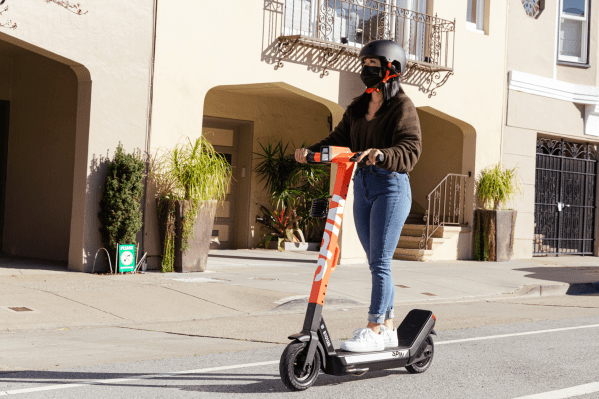 Spin, Ford’s micromobility subsidiary, has launched its first custom designed and built electric scooter. The company says the S-100T scooters are its safest and longest lasting, two qualities that it hopes will attract the attention of cities as it aims its strategy at exclusive partnerships.

When the company launches its service in Sacramento in July, it’ll deploy 25 of the new S-100T scooters along with its existing fleet. Spin hopes to scale to 350 S-100Ts by August and have more than a few thousand in the market by the end of the year, according to a spokesperson for the company.

The S-100T joins Spin’s other vehicles, the original S-100, the three-wheeler S-200 and a new e-bike, which are manufactured in partnership with Segway-Ninebot and Okai. Spin will continue these partnerships in order to maintain a diverse fleet.

Spin has been working on its own scooter since 2019, when many of the scooters on the road came off-the-shelf and fell apart fast. A Los Angeles Times report found LA-area Bird scooters lasted only 126 days.

“At that time, the founders decided to really set a new standard not only for Spin itself, but also for the industry on what e-scooter durability should be,” Maxime Veron, VP of product at Spin, told TechCrunch. “So we really set out to create the toughest scooter out there, and that has been the north star for the design, build and testing of the S-100T.”

“And we really tested it, tortured it, I should say, way beyond the expectation of the industry, and that’s why we expect it to last twice as long as other e-scooters,” he said.

Spin expects the S-100T to last over three years, compared to about 18 months for its S-100. The company reached this estimated lifespan after performing 400 different safety and durability tests, many of which involved pulverizing the vehicle and making it withstand temperatures from -4 degrees Fahrenheit to 149 degrees Fahrenheit.

Low life expectancy of scooters is one of the main reasons why it’s been so hard for companies to achieve profitability, which is why Spin is focusing its scooter design around durability.

“Durability is the biggest lever we have in terms of profitability,” said Veron. “It’s gonna help both our bottom line in terms of making sure that the scooters last longer, and our top line of attracting customers who will love the ride.”

Veron says the S-100T is designed to be modular, with a single frame design that’s durable and allows for easy repairs and parts replacements, which should help with lifespan and sustainability of the vehicle. Perhaps one day, both the design and Spin’s ownership of the vehicles will also help the company come up with a good end-of-life strategy and design for recyclability.

“Durability has been the number one, but we will be able over time to improve on all the key checkpoints including end-of-life because we control it all,” said Veron.