The Super73 brand is instantly recognizable. With riders like Casey Neistat, Jack Black, and even Justin Bieber, these souped up e-bikes have made a name for themselves as a trendy, future-ish way to get around. And I can confirm, in riding the latest Super73 model, the $3,500 RX, around NYC for over three weeks, it certainly attracts attention. It looks and rides more like a dirt bike than a bicycle. 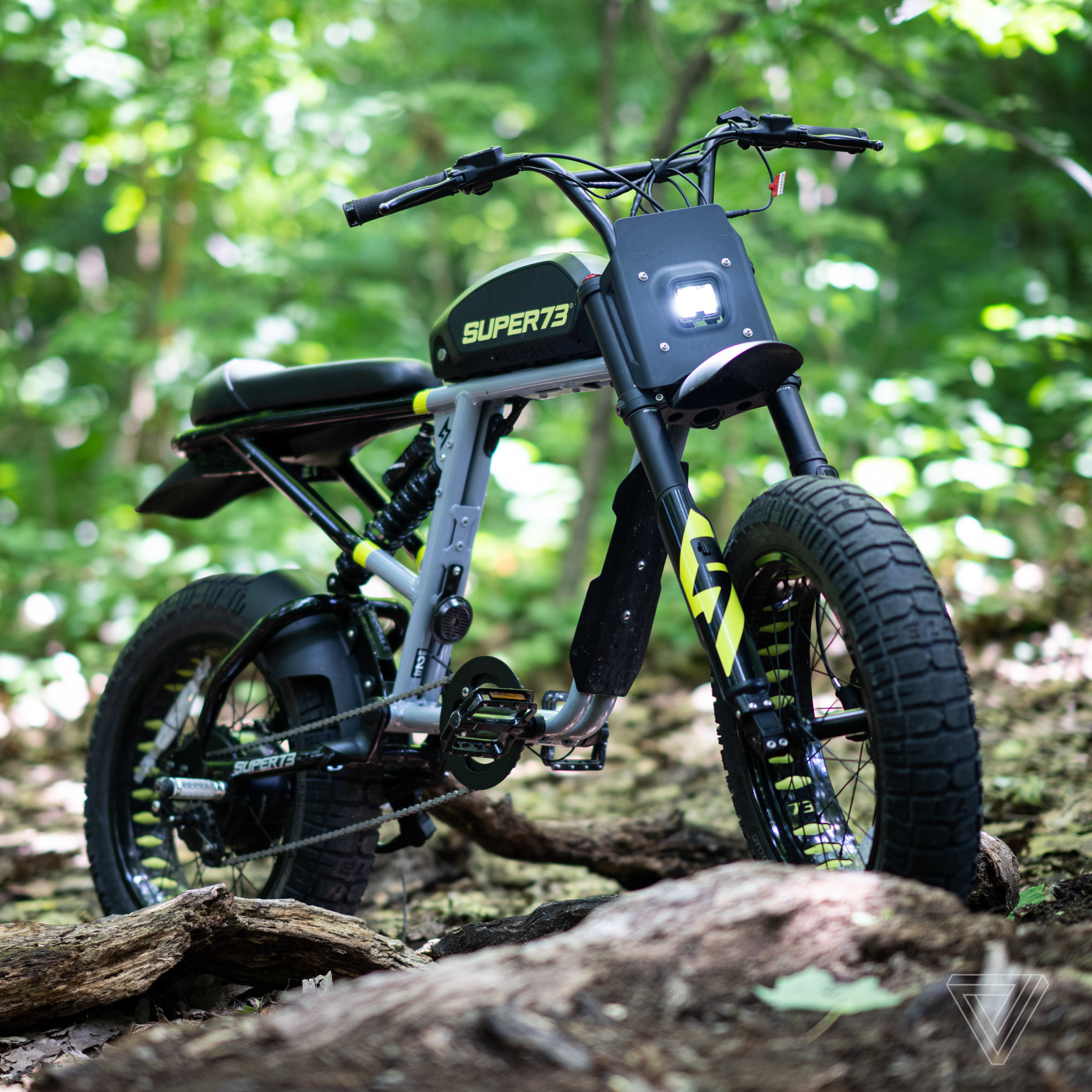 I logged nearly 200 miles on the Super73 in my three weeks with it. In short, I had a really great time cruising around on this bike. The Super73 RX has a 960 watt-hour battery that averaged 38 miles of range in Unlimited mode, the most motor-assisted of the four power modes. There are three other class modes in which RX can operate, including a full-pedal assist mode that Super73 claims can get you up to 75 miles of range. The included 5V charger can recharge the removable battery in three to four hours.

There is a small monochromatic, circular LCD display on the left side of the handlebars that shows speed, range, pedal assist strength, and total distance traveled on the bike. There is also an app that can send turn-by-turn directions to this screen. The app is relatively basic and I ended up never using it aside from setting the bike’s class to align with my local city and state guidelines. There is also a 600-lumen front light and a rear light that is brake-activated, even when the lights are switched off.

The RX’s single rear DC hub motor’s pick up is gradual, but once you are in the 20mph range it can really kick up to its top speed of 32mph in a hurry, and it peaks at 2000 watts of power. There are front and rear shocks that allow for preload, compression, and rebound adjustments. And when paired with the large, custom five-inch wide Super73 tires, the bike cruises over bumps, cracks, and potholes with ease.

I do wish the throttle was a bit harder to press. When going over a bump, my hand would jump a bit which caused my thumb to also jump on and off the throttle and therefore cut some of the power to the motor. It even proved painful when I was on some very dry paths and a quick, accidental acceleration sent me one way as the bike skidded out the other. 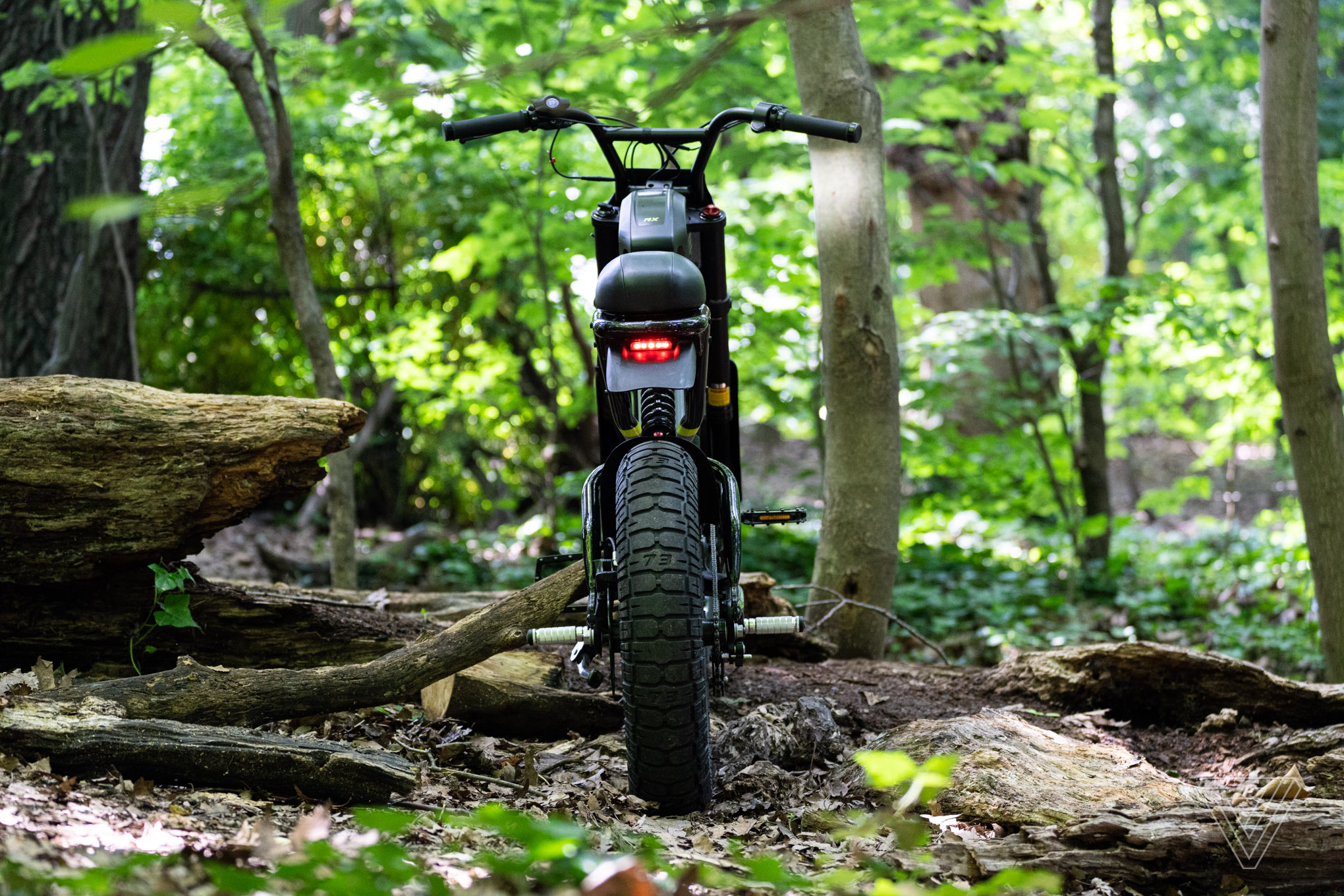 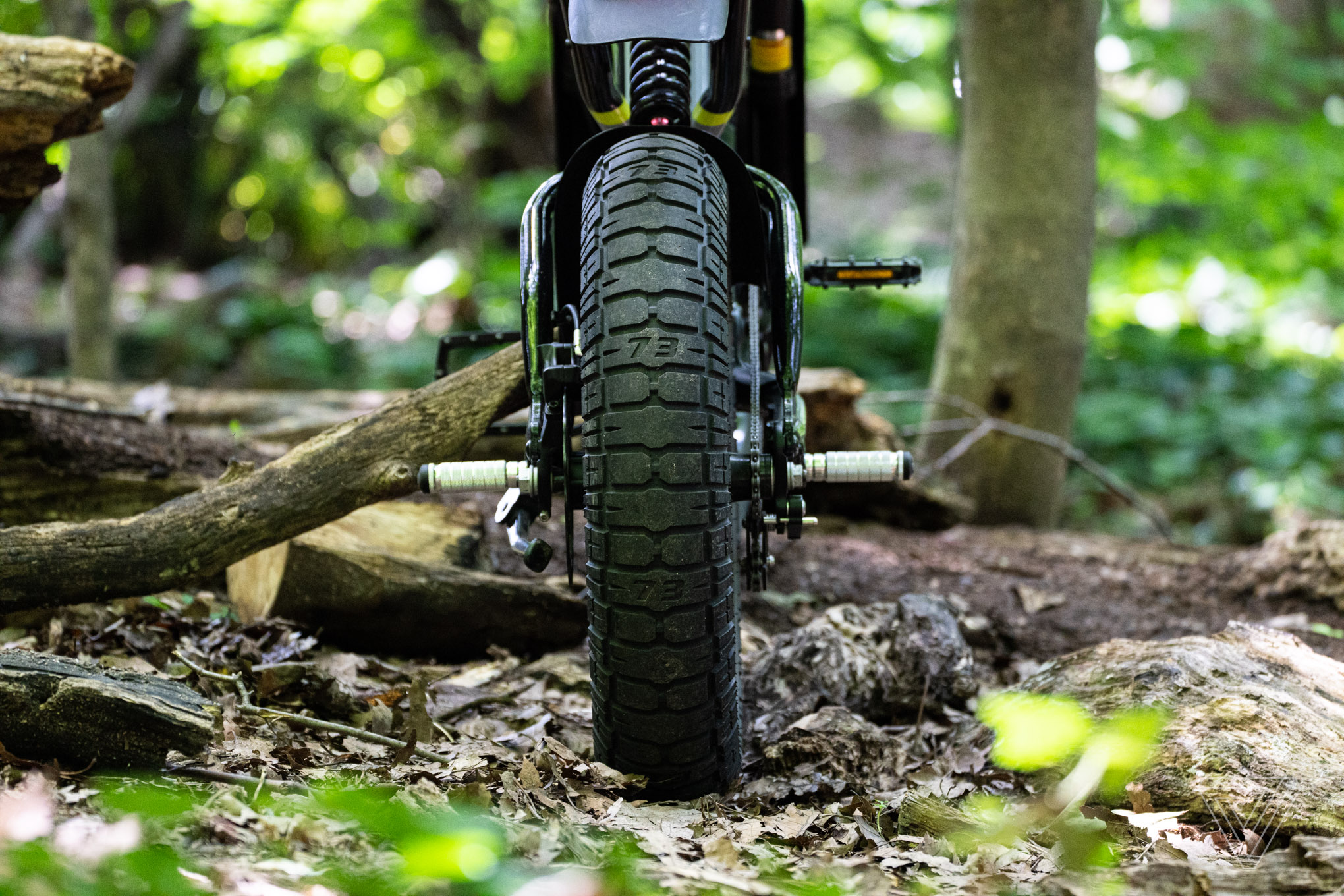 The Super73 branding is everywhere on this bike including on the custom 5” Super73 wheels.

The frame of the Super73 RX is made from aircraft-grade 6165 and 7071 aluminum alloy. It feels very rugged. I kept a chain lock wrapped around the front of the frame, and even with it bouncing and slamming against the bike’s frame, no dents or scratches were left behind. There are also ample mounts for rigging accessories to almost any part of the frame and fenders on both tires. And there are a mess of wires on the front, semi-hidden behind a plastic plate, that then run through the frame to keep the whole bike looking clean.

All of these premium materials add up to a lot of weight. The RX is 80lbs of bike that you absolutely feel when you’re not using the hub motor to power it. I can’t imagine owning this bike and having to move it up any number of stairs.

I took the RX on a few dirt paths in Brooklyn’s Prospect Park, and this is really where you can feel the power of that 2,000-watt motor and front and rear suspension. There is very little this bike won’t go over or up. But again, this is where the RX feels more like an electric dirt bike than a bicycle and where being able to handle 80lbs of bike might get rough if you don’t know what you’re doing. With the low handlebars and pushed-back seat position, the RX doesn’t make for a comfortable pedaling experience either, and using this bike in pedal assist mode only is very uncomfortable. But when using just the throttle, the bike feels really powerful.

The Super73 RX is as great to look at as it is to ride, and at $3,500 it better be. But its lack of built-in anti-theft features caused me great anxiety here in NYC. This bike is a total showstopper and therefore quite desirable. When parking it on the street, I would remove the 11.2-pound battery with the included key then lock it up using both a chain lock and U-lock. Even then, I would still be nervous about someone running away with it. I wish Super73 offered better theft protection options out of the box, like VanMoof, or made the bike only able to be powered via a key, like Juiced.

And while Super73 claims the battery can be recharged 1,000 times over, the one-year hardware warranty is confusing and currently most replacements parts are unavailable via the company’s site. It’s a big investment with little certainty that it will be easily repairable. But if you’re willing to risk all of that, and trust in the good parts Super73 uses on its e-bikes, then you will have an absolute blast busting around on this bike.

Super 73’s RX is just as fun for running errands as it is to take on the trails, that is if you’re not pedaling and instead using the thumb throttle. It feels solid underneath you and can kick up to high speeds for long periods of time on a single charge. But this e-bike is far less of a peddling bike and way more of a throttle bike, which can be hard to get used to if you are coming from a biking background or looking to get any form of exercise while riding. It is also one of the more expensive models of e-bike within this spec range, so it will be important to have a clear purpose before investing in this electric dirt bike.

Photography by Becca Farsace / The Verge