“I think we hit a point where Americans finally grasped what an electric bike is and what its benefits are.” That’s eCycleElectric founder Ed Benjamin talking about the ongoing surge of e-bike demand, especially among independent bicycle retailers.

When the pandemic hit, Benjamin says, people found themselves unwilling to take public transportation. At the same time, people wanted to stay fit but couldn’t go to the gym. So bicycles — and especially e-bikes — became a valuable form of both personal transportation and personal exercise for Americans, many of whom hadn’t been on a bike since childhood.

What Benjamin diplomatically fails to add is that while new bikes of the pedal-only type were almost impossible to come by last year, the supply of affordable e-bikes remained strong almost everywhere, except — and with a single notable exception — the IBD channel.

This is for two reasons. First, when the industry’s inventory picture went into the toilet in 2019, e-bike inventory remained relatively strong. But second and more important, after the Covid onset last spring, many e-bike-only brands kept their orders in place while the IBD sector was busy canceling anything they could. When the demand boom came, brands like Rad Power and Pedego and a new wave of consumer-direct players were generally much better prepared than the IBD channel. (A notable exception, Benjamin points out, is Specialized, which appears to have imported a much larger number of e-bikes in 2020 than other bike-shop brands and has profited accordingly.)

“The D2C channel [for e-bikes] has grown enormously,” Benjamin says. “Brands that service Amazon are in steep decline. But there’s a huge number of new D2C brands, across a variety of price points, who are gobbling up what were formerly bottom-of-the-barrel sales. There used to be 100-150 importers, but now it’s more than 400.” And those consumer-direct brands are becoming increasingly successful.

Benjamin knows this because he painstakingly tracks the USA import figures for those more than four hundred e-bike brands. And since e-bikes are imported to our country under more than a dozen HS numbers (Department of Commerce import codes), the challenge of keeping track of them increases geometrically. What emerges, while not perfect, is still the industry’s best estimate of US e-bike imports.

The chart below shows imports of e-bikes compared to pedal-only bikes with a wheel size of 20″ or greater (which helps weed out some of the mass market sales). 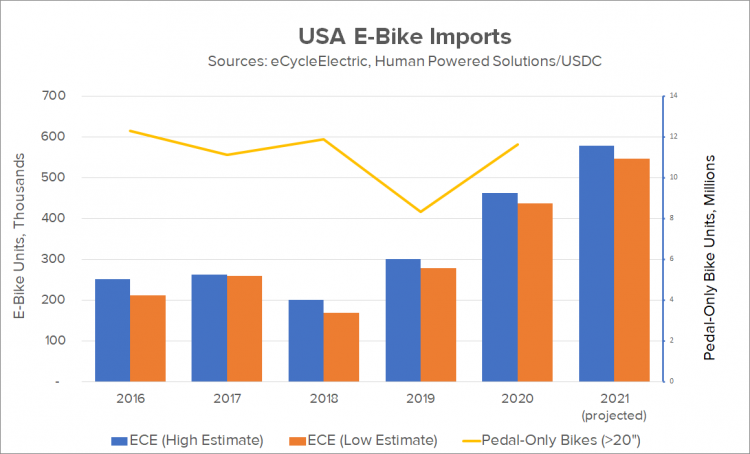 Depending on how you figure the 2019 dip, traditional bike imports have been flat to down over the past five years. At the same time, the e-bike segment continues to grow…by more than 50% in both 2019 and 2020. This means e-bikes are growing rapidly: not just in size, but also in terms of their overall market share, from 2.0% in 2016 to 3.8% in 2020. And if regular bike imports stay flat, e-bike market share will increase to 4.7% in 2021, according to Benjamin’s estimates.

To be sure, e-bike imports are subject to the same availability constraints as all kinds of other products in the post-Covid marketplace. Chokepoints include batteries, (a category that e-bikes share with consumer electronics, automotive and many other product sectors). Another chokepoint is motors, which are currently at maximum production capacity, particularly from leading brands like Bosch, Shimano and Bafang, although suppliers in both categories appear to be increasing capacity, Benjamin says. And of course all the same parts — tires, wheels, components, saddles and so forth — that keep pedal-only bikes in such short supply apply equally to electric bikes as well.

But the bottom-line news is good. As the number of e-bikes sold continues to increase, so does the IBD’s share of the pie, Benjamin says.

This point is critical. Despite the proliferation of competing D2C brands, consumers are learning there’s added value in e-bikes from specialty retailers. This is true both in terms of performance and the critical benefit of serviceability. Consumers are increasingly looking for —and willing to pay for — a bike-shop quality e-bike, and they expect a professional dealer experience to come with it.

Call it education, or the effect of a maturing market. But to repeat Benjamin’s quote from the top of the piece, “I think we hit a point where Americans finally grasped what an electric bike is and what its benefits are.” And, despite current challenges, that means big opportunity for the specialty retail channel to cash in on this wave of new customers looking for quality e-bikes…and willing to pay for them.