Decent is one of the latest brands to enter the ever-growing e-scooter market, with the Decent One and Decent One Max now available through UK retailers, including John Lewis and Halfords.

This review focuses on the more expensive Decent One Max, which shares many of the same features as its sister model but comes with double the range per charge.

Decent One Max electric scooter review: What you need to know

The Decent One Max is a no-frills electric scooter that manages to pack in many sought-after specs and features. A detachable 36V 360Whr battery means the decent 24-mile range can be extended further with an optional second battery pack, giving you plenty of coverage for longer rides. 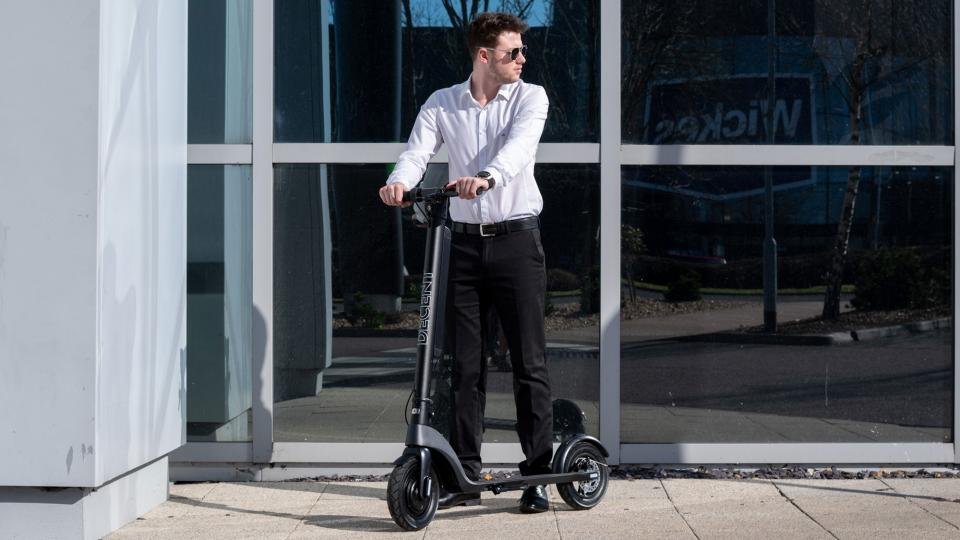 The scooter has a 350W motor and 10in wheels with pneumatic tyres, while an IP54 weather-resistance rating gives you protection against the elements. At 15kg, it is lighter than other models with similar specs. It also comes with cruise control but you can’t pair it with your smartphone to access extra features.

It is important to make clear at this point that electric scooters are classified as Personal Light Electric Vehicles (PLEVs) in the UK and therefore illegal to ride unless you’re on private land with the landowner’s permission.

The Decent One Max costs £449 at John Lewis – a competitive price when set against models with similar specifications. For £20 more, the Xiaomi Pro 2 delivers an extra four miles of range at 28 miles per charge and offers smartphone connectivity, but has smaller 8.5in wheels and there’s no option to change batteries.

For the same £449 price, the new Pure Air electric scooter has a more powerful motor (500W v 350W), a USB charge port, can be paired with a smartphone app for extra features and can accommodate a heavier maximum rider weight of 120kg, compared to the 100kg of the One Max. The Pure Air is heavier to carry, though (17kg vs 15kg), and has a shorter maximum range of 18 miles.

The Decent One Max is very easy to set up. After unfolding and securing the steering stem into its upright position, it’s a simple case of sliding the brake lever onto the left handle stem before tightening with the Allen key provided and then screwing the grips in place. 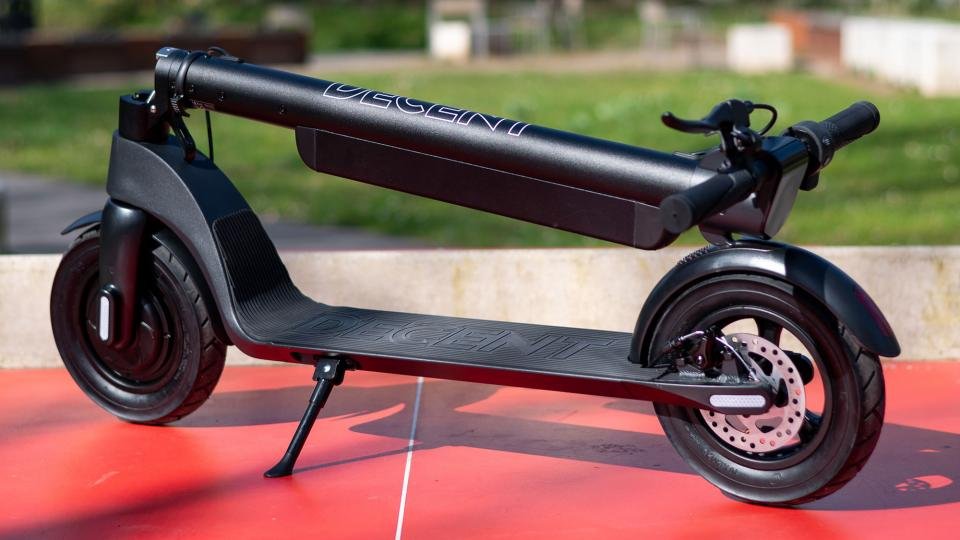 Once assembled, it’s fairly standard-looking from a design point of view with a plain matte black finish that is sure to appeal to many riders. The battery pack is attached to the chunky stem, which means it looks a little larger than other models we’ve reviewed.

However, this allows the battery to be removed and replaced in seconds and means it is also better protected than on some other scooters, where the battery is located in the base plate. A full charge takes around five to six hours.

As with many models, the brake lever with attached bell is on the left of the handlebar and the thumb throttle accelerator to the right. The LED display sits in the middle of the stem, displaying your current speed, riding mode and how much battery life is remaining.

A headlight is located at the top of the stem and there’s also a brake light built into the rear mudguard. The rear mudguard also acts as an emergency brake and is part of the triple brake design of the scooter, alongside the mechanical rear disc brake and front hub motor brake.

Aside from the removable battery, the Decent One’s other stand-out feature is cruise control, which allows you to give your thumb a rest from the throttle but keep travelling at a constant speed.

The function can be engaged at any time by holding the throttle down for six seconds and although it’s a slight annoyance that it disengages every time you touch the brake lightly, it makes perfect sense from a safety point of view.

Disappointingly, unlike many other modern e-scooters models, the One Max does not come with an accompanying app that can open up other features including more precise riding and battery information stats.

The Decent One Max is a solid, robust scooter and comfortable to ride. The 10in pneumatic tyres do a great job soaking up bumps and holes in the road, ensuring you never feel out of control.

With the Beginner mode feeling rather slow, I spent most of my time in Normal and Sports modes. However, if it’s your first time on an e-scooter, it’s definitely worth starting out in the lowest setting until you get used to handling it.

Battery life is solid. On one of my test rides, I was out for seven miles and finished up with two blocks of battery life out of five. I spent the majority of this time in Sports mode and had a fair few hills to climb, so that’s not bad.

This was pretty similar to the Volter and maybe a little less than the Xiaomi Pro 2 I’d recently tested over similar distances, but it is important to consider that the optimum range varies greatly depending on weight of rider, terrain and mode when riding and you will often need to recharge a lot sooner than the max range stated. On the subject of hills, the Decent One Max dealt with a couple of particularly steep inclines with ease.

With other models you can sometimes manage to push a few extra miles per hour on a descent but, in the case of the One Max, that wasn’t the case and I was unable to get above 15.5mph at any point. However, that’s more than fast enough for any journey. 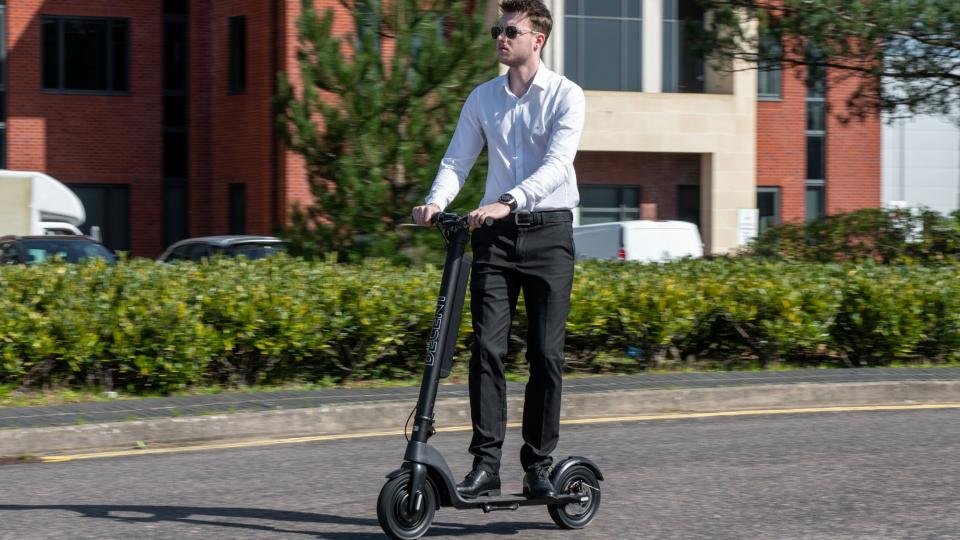 Stopping is good, too. The triple braking system allowed me to bring myself to a halt fairly sharply from fast speeds within a few seconds. The mudguard brake can stop you even quicker in the case of an emergency but, thankfully, I didn’t need to use it at any point.

On the downside, the fact that the battery is attached to the stem and not hidden under the footplate means it can be awkward to carry. I struggled to wrap my hand around the stem, which is not a problem I’ve experienced when carrying other e-scooters around. The flipside of this is, of course, that you get potentially more range if you purchase a second top-up battery and keep it charged up in your bag.

The Decent One Max is billed as a “no-nonsense scooter” on the manufacturer’s website and that’s a summary I’d very much agree with. It has cut back on the luxuries to offer a comfortable ride and excellent range. The main plus points for me, however, are the cruise control mode and detachable battery.

If you want to be out for long periods, it can be difficult having to plan your rides around recharging and constantly worrying whether you will have enough juice to get home. Here, you can simply buy an extra battery and keep it in your bag, ready to swap in once the first one runs out. Problem solved.

Is it the best e-scooter you can buy? It’s a solid choice, but a few other scooters edge it for me – although it totally depends on the features you find most useful and where you’re planning on riding. Even though it has lower range, the Pure Air is a better option overall because of its app capability, more powerful motor and ability to carry heavier loads.