British brand Volter is a new face on the e-scooter scene. Its first foray into the world of sustainable transport is its debut electric scooter, the Volter Series One, and it has one major selling point over its rivals: this is a quintessentially British design that’s ready to take British weather in its stride.

Volter Series One electric scooter review: What you need to know

The Volter Series One is a unique-looking, powerful and well-built electric scooter. It has a 350W motor, 8.5in pneumatic tyres, and a maximum load capacity of 120kg. The IP55 weather-resistance rating allows it to be ridden in light rain, too. 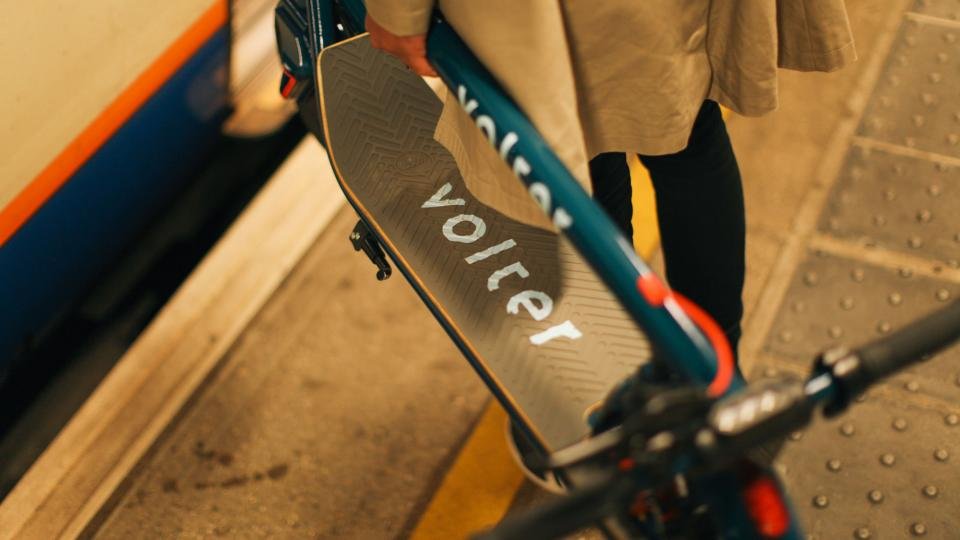 The 36V 13.2Ah battery provides a claimed 25-mile range and charges to 80% capacity in three hours, with a full charge taking seven hours. A handy USB point allows you to charge your phone on the go, too, which is a nice touch.

Volter is keen to stress its eco-friendly credentials, and the company plants a tree for every scooter sold.

At this point, it’s important to clarify that electric scooters are classified as Personal Light Electric Vehicles (PLEVs) in the UK and therefore illegal to ride unless on private land with the landowner’s permission.

The Volter Series One costs £449 with standard air-filled tyres and it comes in two colours: Black and Teal.

The Halfords Carrera impel is-1 (£399) is a key rival. It has a 350W motor and its stand-out features include a built-in cable lock and alarm, double-braking system and thumb-activated speed modes. However, it’s around 1.5kg heavier, with a total weight of 17kg, and has a smaller range – 18.6 miles to the Volter Series One’s 25 miles.

However, for £449 – the same price as the Series One – the new Pure Air Second Generation must be considered, with a 500W motor offering a lot more power and larger 10in pneumatic tyres over the 8.5in of the impel and Series One, giving you a smoother ride over potholes.

For £449, the Xiaomi Pro 2, also comes into consideration. At the same price as the Series One, you get a slightly longer 28-mile range per charge and an accompanying app with extra features such as motor lock and cruise control. However, it doesn’t come with a USB point and Xiaomi doesn’t go the extra green mile by planting trees with every scooter sold.

There’s not a lot to choose between these models, with the same tyre size and similar ranges. From a design point of view, the Series One is a clear winner, but if an app is important to you, then the Xiaomi Pro 2 is the one to go for.

The Volter Series One is easy to set up. After getting it out of the box, you unfold it, lock the handlebar into position with a clip on the base of the stem, then attach the brake lever. The single brake lever has an integrated bell, and all you need to do is push it onto the handlebar and tighten it with the provided Allen key. Finally, the two grips screw onto the handlebar.

Once assembled and upright, the scooter has a unique design. The review unit I received has a frame that is finished in an attractive teal colour with a standing deck that looks like a retro skateboard replete with grip tape stuck to a wooden base. A further skateboard-like design feature is that the wooden standing deck has a gently concave profile to help prevent your feet from slipping off. 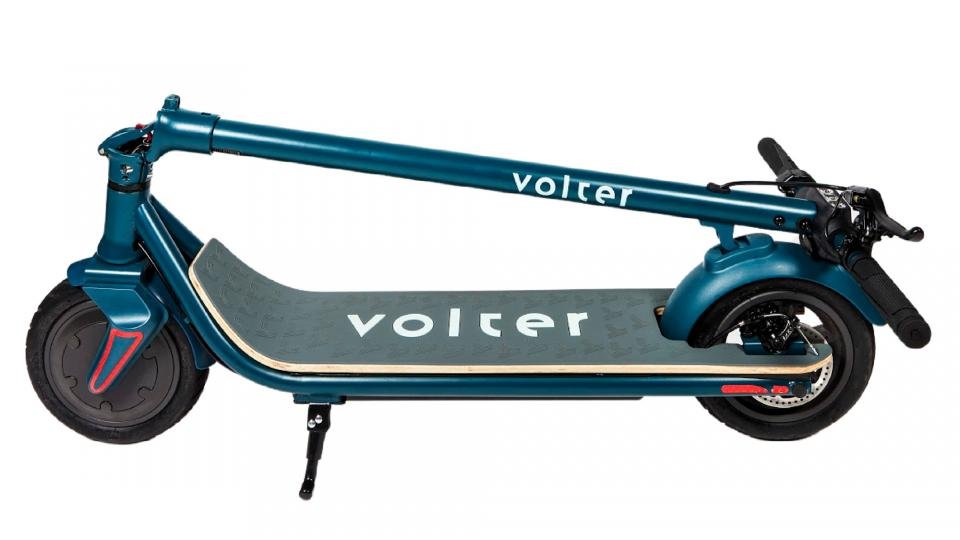 The Series One’s throttle is located next to the right handle grip, and an LED display mounted in the centre of the handlebars shows your speed, remaining battery level and how far you’ve travelled in miles or kilometres, either in total or per trip.

Braking is handled by a rear disc brake and front KERS brake, and you can also slow down manually by pressing the rear mudguard with your foot. Safety features include a large headlight with three bright LEDs, and a second light on the rear mudguard which also acts as a brake light.

While 10in pneumatic tyres – like the ones on the Pure Air – offer a smoother ride over bumps and potholes, you won’t feel the difference when riding the Volter’s 8.5in pneumatic ones because it provides adequate cushioning on uneven surfaces, although its best to stick to smooth surfaces for a pleasant ride.

Its battery provides a maximum range of 25 miles per charge. During my testing, a full charge took around seven hours, although Volter claims that the Series One will charge to 80% in three hours, which is very impressive because most other e-scooters don’t charge as quickly.

Despite weighing a relatively svelte 15.5kg, the maximum advised load is a generous 120kg, which is enough to handle all but the largest riders. It’s fairly portable, too, and will easily fit into most car boots once folded.

The Volter Series One has an IP55 weather-resistance rating, which means that you can take it out in light rain without voiding the warranty. 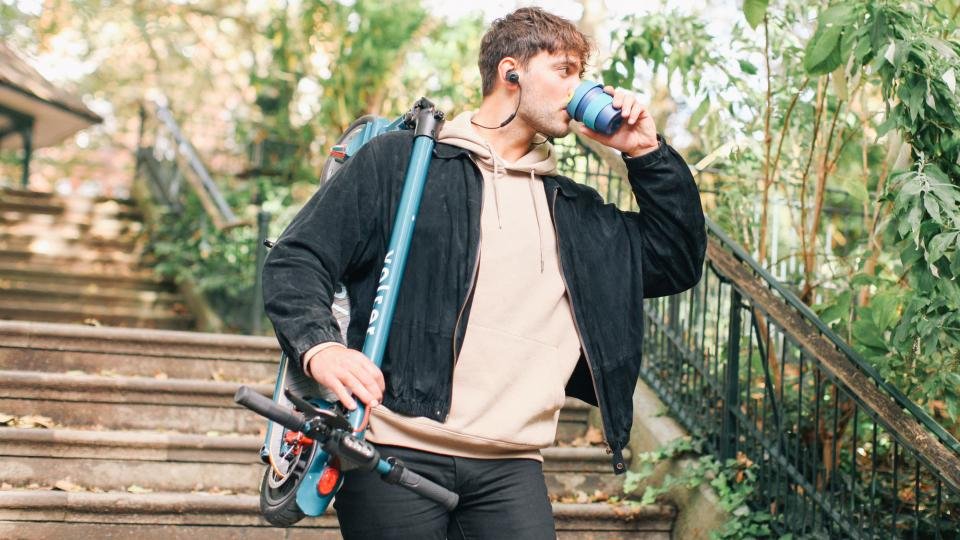 A handy USB port is located under the LED display and is weather-sealed with a rubber grommet. This allows you to charge your mobile phone on the go, but you’ll likely need to invest in a secure phone holder if you don’t like the idea of trailing cables.

Disappointingly, the scooter doesn’t have an accompanying app, which is something that comes as standard on many models. This means that the Volter lacks handy features such as the ability to remotely lock the scooter and activate cruise control, and there’s no access to precise information on battery life and condition.

Like most e-scooters on the market, setting off is as easy as turning the power on, kicking off gently and pressing the throttle.

The scooter has three riding modes, each with a maximum speed. The first is set at 6mph, the second at 9mph and the third at 15.5mph. I managed to go a little faster than the rated maximum speed for each mode when going downhill. However, I wouldn’t recommend doing that because I found the scooter wobbly when travelling at anything over 15.5mph.

The slowest mode is the default setting and the speed button underneath the LED display cycles through the different modes. This feels clumsy next to rivals such as the Carrera impel is-1 which uses a thumb lever to change gears, but it’s easy enough to get used to.

Overall, the Series One is a nice ride. It feels well made, sturdy and powerful. The 350W motor did a good job of navigating small hills and while the 8.5in pneumatic tyres are smaller than some other models, they handle lumps and bumps pretty well. 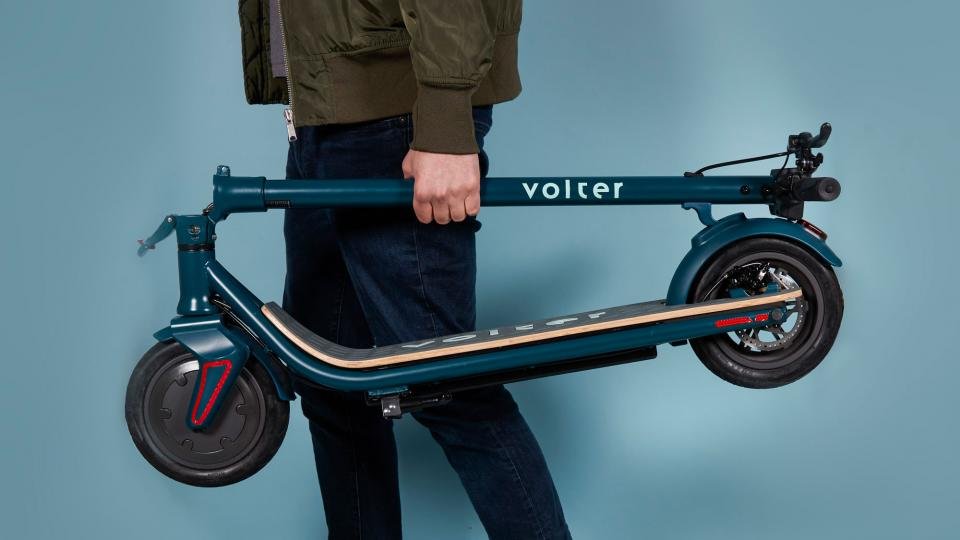 Thankfully, the Series One stops as well as it starts. Using the brake lever cuts out the motor immediately and engages the disc brake on the rear wheel. It did a great job of stopping the scooter, even at higher speeds.

I appreciated being able to see how far I’d ventured out on the LED display, it was handy to be able to see distances and speeds in either miles or kilometres. After a few initial rides in second and third modes amounting to around seven miles, it was great to see half the battery life remaining.

While a 25-mile range is stated, it is important to consider that this optimum range varies greatly depending on many factors, including rider weight, terrain and mode when riding.

The Volter Series One is comfortable, powerful and fast, and it doesn’t hurt that it looks pretty smart, too.

It’s got excellent battery life, travelling up to 25 miles on one charge, and the handy USB port for your phone is a welcome addition. It’s a shame there isn’t a matching app given the asking price, but that omission is easy to overlook given the Series One’s all-round performance.

If you’re looking for a great British scooter perfect for not-so-great British weather, then this is one ride that should definitely be on your shopping list.