In 2020 a bike designer Kendal Toerner had created an unconventional bike, called Model-B, which was quickly dubbed as Tesla Bike because of its intention, look and designing mentality.

We, at Torque News, covered Toerner’s Tesla Model B concept in the fall. But since then Toerner has been working to bring the Model B e-bike to life as the Micro Bike, backed by a team of prominent investors.

On May 10, his team hosted a first-of-its kind NFT auction for the first 15 vehicles off the production line, which were made as collectible versions plated in precious metals.

The design of the Micro Bike can now also be seen at micro.com (You can also follow them on Instagram). This is a first-of-its kind e-bike with a design philosophy that has never been seen before in the e-bike world. On top of that, it’s the first vehicle ever released via NFT auction.

The first 15 units sold for $125,000 and there was huge interest from members of the technology and cryptocurrency worlds. 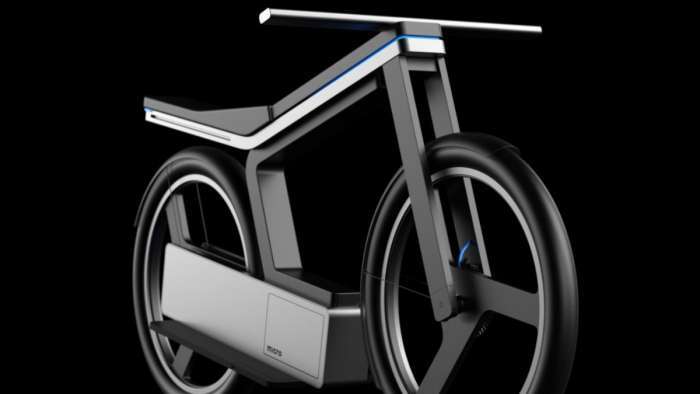 In our previous coverage of Toerner’s Tesla e-Bike, in the article’s comments some of the Torque News readers didn’t believe the concept could actually be put into production. “We have beat the perceived odds on this one,” said Toerner to Torque News. Thus, this time, the Micro Bike is for real, and will be delivered in 2022.

Just like Tesla the Micro Bike breaks the rules of bicycle design and performance, marking a new era for personal mobility.

Specs of The Micro Bike

Micro Bike is fully electric. It’s pedal-less and seats two people. As you see the images, you will probably agree that the design philosophy of this e-bike has never been used before in an electric bicycle. What’s different in this e-bike is that a rectilinear silhouette defined by a single metal volume from which purposeful cuts are made.

One of the main goals the designers of the Micro Bike tried to achieve was to build a lightweight electric bicycle. This was the ethos of the design. Toerner says the first full-production delivery of this e-bike will occur in early 2022.

Micro Bike’s designer Kendall Toerner is a Seattle-based industrial designer with experience at Oculus and Whipsaw. He previously created the Tesla Model B e-bike concept which went viral in numerous EV and design outlets, including Torque News.

Armen Hareyan is the founder and the Editor in Chief of Torque News. He founded TorqueNews.com in 2010, which since then has been publishing expert news and analysis about the automotive industry. He can be reached at Torque News Twitter, Facebok, Linkedin and Youtube.