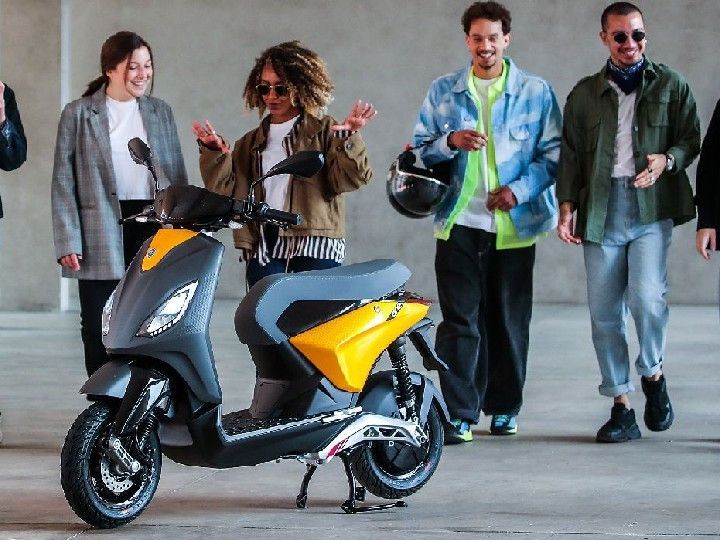 Piaggio has teased its second electric scooter, the ‘One’, on TikTok. Full details of the scooter will be unveiled at the upcoming 2021 Beijing International Motor Exhibition, taking place on May 28, 2021.

The Piaggio One is primarily targeted towards the youth with its tagline reading “One for all, all for One” — a catchphrase that clearly describes Piaggio’s global launch intent. In fact, there’s an entire electric scooter platform planned, based on the One with electric motors of different capacities ranging from mopeds up to motorcycles. All offerings will be powered by a swappable Li-ion battery, probably in line with the swappable battery norms Piaggio has set with KTM, Yamaha, and Honda.

Visibly, the One will surely catch a few eyeballs, thanks to its yellow and grey finish wrapped around the rather conventional design. We particularly like the aluminium swingarm that looks exquisite.

Complementing the scooter’s youthful design is a long list of features which includes keyless ignition, LED illumination all around, two ride modes, a full-colour digital display with an automatic brightness sensor, and a spacious under-seat storage.

Piaggio further boasts about the scooter’s low, roomy seat and comfortable riding posture, although its dimensions are yet to be revealed. Disc brakes at both ends, alloy wheels, dual gas shocks at the rear, and a single telescopic fork up front can also be spotted on the teaser images.

Judging from what we know so far, we think the One would be perfect for the Indian market that has warmed up to electric two-wheelers lately. However, Piaggio’s India plans differ from its global plans as pricing is a key factor here which means it would have to resort to localisation if it ever plans on bringing the One electric scooter to India.

So, instead of the One, we could be getting an India-specific e-scooter based on the Vespa Elettrica (showcased at the 2020 Auto Expo) late next year.