Lords have today urged police to crack down on illegal e-scooter riders ahead of a rollout trialling their use in London.

During a debate on the number of electric scooters being used illegally in the capital city, Baroness Williams of Trafford said the ‘enforcement of road traffic law’ is an ‘operational matter’ for the Metropolitan Police.

The Home Office minister also said she ‘shared concerns’ with Baroness McIntosh of Pickering, who contended that the law is ‘simply not being enforced’ to prevent e-scooters being used on pavements, roads and in parks.

Electric scooter trials are currently being rolled out in towns and cities across the country, including Canterbury and London. The 12-month rental scheme will begin in the capital on June 7.

The comments follow a study by Transport for London (TfL) finding that e-scooters could be 100 times more dangerous than bicycles.

And in July 2019, TV presenter and YouTube influencer Emily Hartridge was killed while riding her e-scooter in Battersea, London. 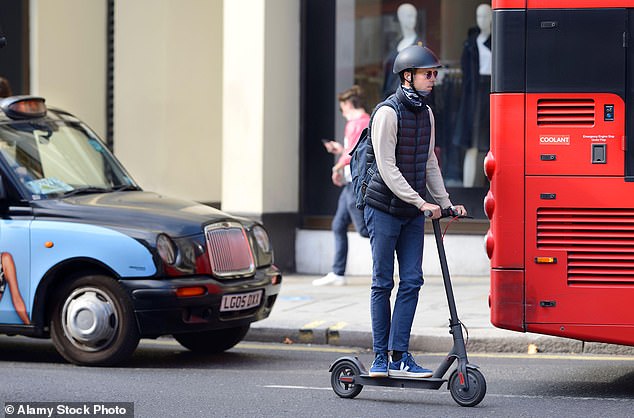 In a debate today, Lords urged police to crack down on illegal e-scooter riders ahead of a rollout trialling their use in London (file photo) 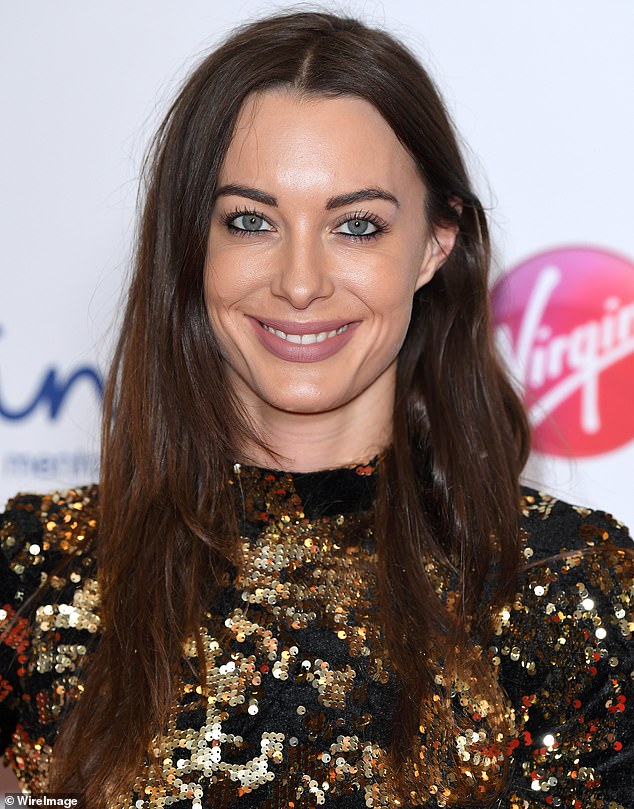 In July 2019, TV presenter and YouTube influencer Emily Hartridge (pictured above, in November 2018) was killed while riding her e-scooter in Battersea, London

Speaking in the House of Lords today, Baroness Williams said: ‘Enforcement of road traffic law in London is an operational matter for the Metropolitan Police, according to local policing plans.

‘The government will continue to support the police in ensuring they have the tools needed to enforce road traffic legislation including those relating to electric scooters.’

Conservative politician Baroness McIntosh asked: ‘Does my honourable friend accept that with e-scooters, which are totally illegal to be used in public areas in London at this time, only yet are widely used on pavements, in parks and on roads, risking casualties and deaths, law is simply not being enforced?

‘Will she use her good offices to ensure that before the pilot starts in June for rental scooters in London, that the use of e-scooters, which are illegal when owned and used in public places, are properly regulated and policed as a priority and the law is enforced?

‘Is she aware that the fact that they are not currently regulated and ensure, any casualties will be dealt with as a drain on the resources of the Motor Insurers’ Bureau?’

Baroness Williams responded: ‘I totally share my noble friend’s concerns and of course there are two categories of scooter, the rental scooter, which can be insured, and the privately-owned scooter, perfectly legal to purchase them but they cannot be insured.

‘So I hope that, there have been trials going on all over the country, but I hope the trials that are going on in London will once and for all clarify the situation around this and, as she said, prevent the problems that she outlines from happening.’ 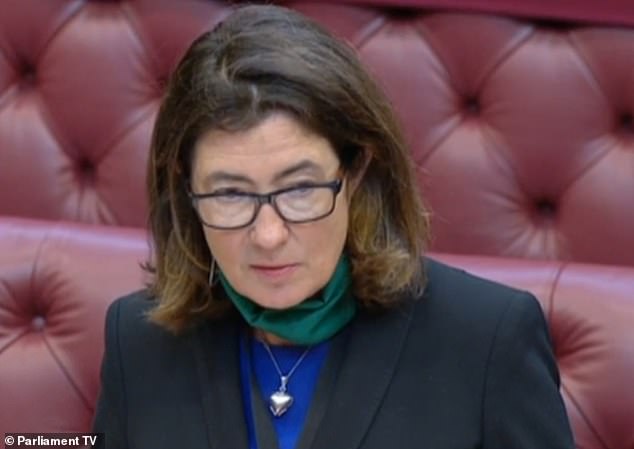 Home Office minister Baroness Williams of Trafford (above, during debate) said the ‘enforcement of road traffic law’ is an ‘operational matter’ for the Metropolitan Police 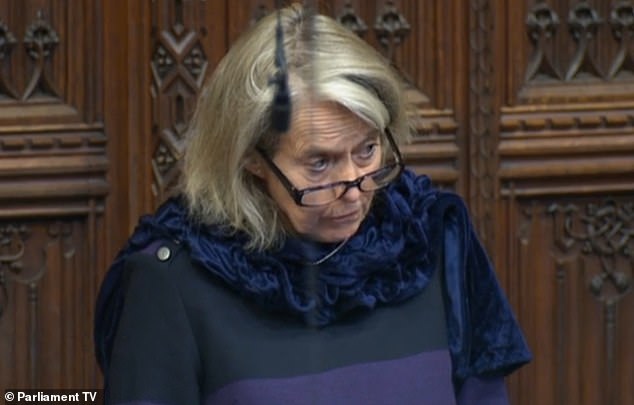 Baroness McIntosh of Pickering, above, contended that the law is ‘simply not being enforced’ to prevent e-scooters being used on pavements, roads and in parks

Baroness Randerson also urged the government to ‘look again at the trials taking place’ and ‘speed up the introduction of proper regulations and penalties’ across the UK.

It comes after a police and crime commissioner called for the controversial trial schemes of e-scooters to be halted ‘before more people are hurt’.

Matthew Scott, Kent’s PCC, said the government needs to stop the expansion of e-scooter trials, before it loses control of the issue.

E scooters are becoming more popular and there are currently about 50 government-backed trials running in towns and cities across the UK.

The trials will begin in London next month – despite TfL chiefs admitting that e-scooters could be far more dangerous than bicycles.

A study by TfL, based on US data, found riders needed hospital treatments after accidents every 3.1 years on average, with many suffering head of neck injuries.

TfL admitted that comparisons with the US are difficult, but the number of cyclists killed or seriously hurt in London was 2.7 per one million journeys ‘or roughly 100 times fewer injuries than expected in US e-scooter studies’. 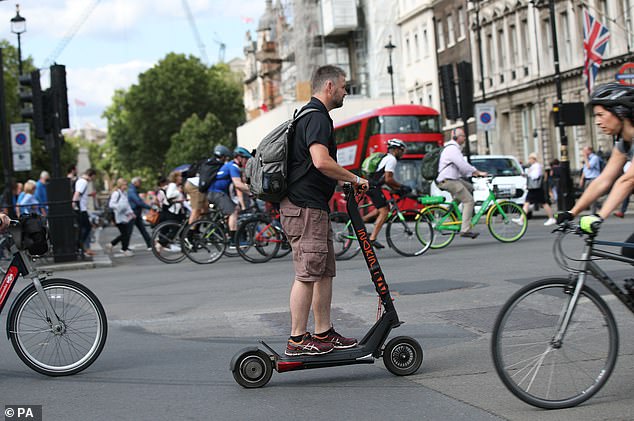 According to figures obtained by ITV, there have been more than 200 injuries and over 1000 complaints since the pilots began (file photo)

‘Cycling in London would be considerably less risky than e-scooters if these figures were replicated here,’ the study added.

There are more than 7500 rental scooters in use but more than 800 incidents have been reported to local authorities and 122 users have been banned from using them as part of trials in the future.

According to figures obtained by ITV, there have been more than 200 injuries and over 1000 complaints since the pilots began.

E-scooters are now used in more than 100 cities worldwide, but many have suffered serious injuries while using them and others have died. 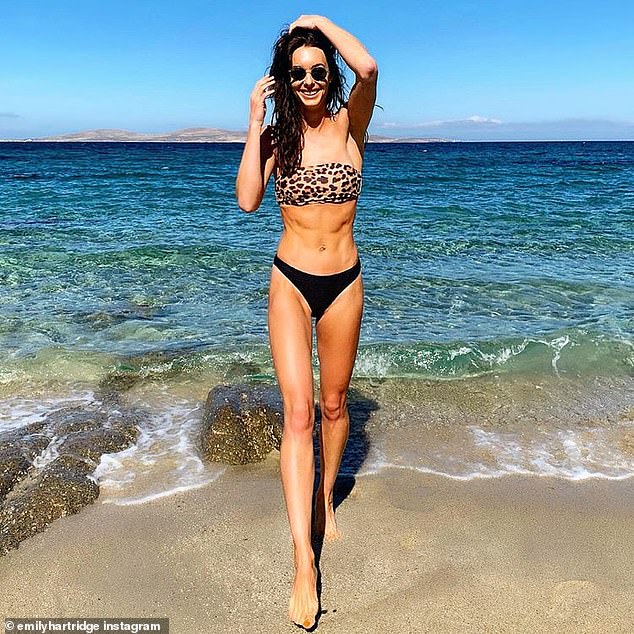 Emily Hartridge (pictured) was killed in an accident in 2019, when she was thrown from her e-scooter on a roundabout in what is thought to be UK’s first fatality involving one of the vehicles

On April 17, a three-year-old boy suffered serious injuries when he was hit from behind by an e-scooter while walking on a pavement with his grandmother in Feltham, west London.

In the UK, three people are now known to have died using them, while in America the number of e-scooter accidents that leave people needing hospital treatment has risen by more than 222 per cent in four years.

Emily Hartridge is believed to be the first person to die in the UK in an accident involving an e-scooter.

She was later ruled to be riding too fast with an under-inflated tyre when she was tragically killed in a crash with a lorry.