The Riverside 540e is a very capable leisure e-bike from multi-sport giants Decathlon. There’s lots to like about the build and the ride, but unusually for Decathlon it doesn’t really stack up in terms of value: other options are much better.

Decathlon has its fingers in pretty much all the sporting pies, and spins up separate brands for different disciplines. Riverside is a new name; bikes like this used to be grouped under the B’twin brand which covered everything from city hopabouts to professional race bikes but the different types of bike have now been separated. Riverside is the leisure and touring brand, and the 540e is the top-spec electric bike in the range. 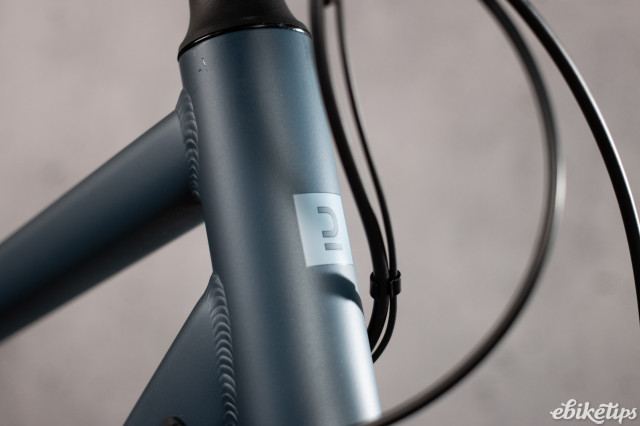 Built around an alloy frame and a Suntour NCX SF17 suspension fork, this is what you’d generally call a leisure hybrid. The position is a bit sportier than a city bike, and it feels like it’s designed to appeal to people who are cycling for fun rather than as day-to-day transport. It’s fairly stripped back, with no mudguards or lights, although those things can always be added to make the 540e more all-weather friendly. The diamond frame has a shaped and dropped top tube to give a bit more standover height, and make it a bit easier to get on and off. Sizes from S to XL are available to cater for riders from 1.5m up to 2m. All the sizes except small include bosses for a water bottle on the seat tube. 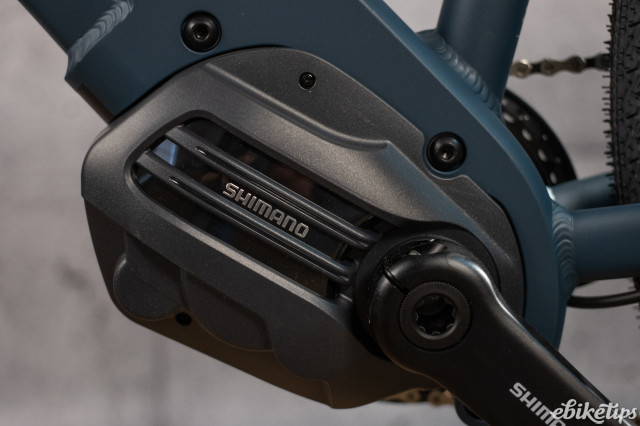 Motor power comes from Shimano’s excellent STEPS E6100 mid motor. The motor unit weighs in at 2.9kg and supplies up to 60Nm of torque across three assistance modes. It’s not functionally silent but it is pretty quiet, and it’s a great motor for city and leisure riding. Paired with the excellent 10-speed Shimano Deore transmission on this bike, it made mincemeat of my benchmark climb (1.5km at 5% average with a 12% section) and I breezed up to the top somewhere near the middle of the 11-36 tooth cassette.

The 540e will handle much steeper climbs than that, and to prove it I pointed it at the steepest one round here, the 25-30% madness of Prospect Place. Okay, it wasn’t a free ride up there, but the bike made it pretty easy when normally it’s ridiculously hard. It’s a powerful enough motor for nearly any use case; compared to the Bosch line up it places somewhere between the Active Line Plus and the Performance Line in terms of numbers, and that’s how it feels in use. 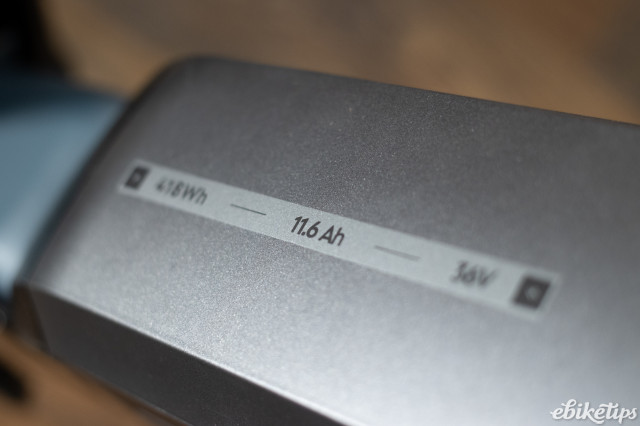 You get Shimano’s 418Wh battery on the bike, which isn’t the biggest battery but gives the 540e a decent range. Decathlon says that range is up to 120km, which is probably unrealistic unless you’re cycling across the Fens on a still day, but around here I’d expect to get at least half that and probably a bit more if I was on less challenging terrain that allowed me to use the lower assistance modes. The 540e is a decent enough bike to ride without power, too: it’s not overly heavy at 21kg and there’s not too much drag from the motor or the tyres, so on the flats you can easily roll along without engaging the motor if you have a bit of cycling fitness. 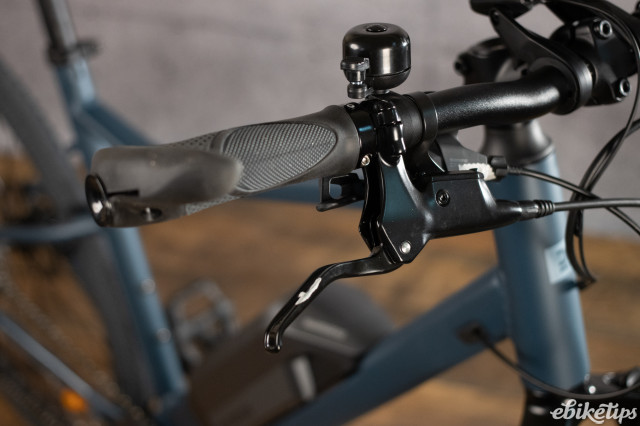 The riding position is pretty neutral in terms of how aggressive it is, and the wide bars and bar ends make it easy to control, with steering that’s predictable and not twitchy. The fork is average at best, but to be fair that’s a rung above many of the suspension forks you’ll find on leisure bikes. It has 63mm of travel and adjustable preload so you can tweak it to suit your weight and riding style, and there’s a lockout for the tarmac too. It’s a bit flexy fore to aft when you’re pulling on the powerful Tektro TKD hydraulic disc brakes, but not unusually so. The brakes themselves are very good, although the cheap non-finned rotors can get hot on longer or steeper descents, causing a bit of fade. 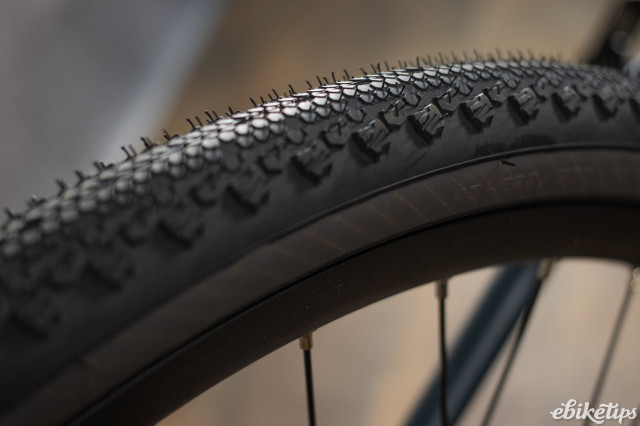 The 38mm Vittoria Terreno Dry tyres are an excellent choice for the kind of surfaces that a bike like this is likely to encounter: tarmac and lighter, well-graded tralis. They’re not designed for technical off-road riding (and nor is the bike) but they’re good on towpaths and fire roads and the like, with enough air chamber to cope with some rougher surfaces too. A bike like this is most likely going to be pressed into service for leisure excursions and as a runabout in town. If you want to make it more suitable for city living then there are rack and mudguard mounts, and integrated lighting can be added to the Shimano motor system, so it’s a decent basis for an all-year commuter as well as being a good fair-weather bike out of the box. 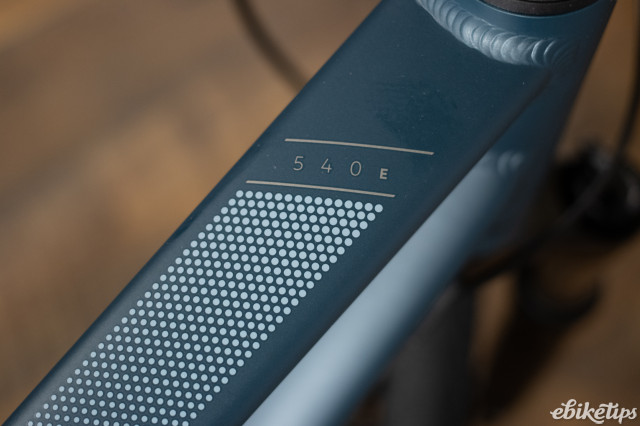 Overall the quality of the frame and the build components is very good. There’s nothing that won’t last, and as a whole the bike is enjoyable to ride. But at £2,499 it just feels too expensive. Compare it with, for example, Carrera’s Crossfuse: okay a few of the components are a bit cheaper than the Riverside, but it’s a very similar bike and at £1,899 is only three quarters of the price. Or, compare it with the Cube Nature Hybrid EXC 625 Allroad: That’s £100 more than the 540e, but you’re getting a 625Wh battery that’s half as big again, a better motor, a better fork, a wider range transmission and all the all-weather finishing kit thrown in. Or, more pertinently, compare the Riverside 540e to itself: In France the RRP is €2,199, which is about £1,900. That’s what I’d expect Decathlon to be knocking out a bike like this for, because it would be great value at that price and that’s exactly what they’re known for. Add on another £500 and it’s still a good bike but it looks expensive compared to other bikes on the market and as such is a lot harder to recommend. You won’t be disappointed with it, but you won’t feel like you’ve scored a bargain either.