Let’s get straight to the point: the second-generation Pure Air Pro electric scooter isn’t a huge upgrade over the original that released last than a year ago, but it still represents the very best in the business.

If you’re still whizzing around on the 2020 model (no longer available to buy online), then there’s really not much point in upgrading, but if you’re on the lookout for a do-it-all electric scooter that doesn’t compromise when it comes to necessary features, then the – admittedly pricey – Pure Air Pro is probably your best bet.

Like the cheaper Pure Air, which I also recently reviewed, the Pro model has received a handful of quality tweaks with this iteration.

The biggest changes include the addition of a larger 500W motor and a bigger 36V Li-ion battery. The Pure Air Pro’s quoted range has also received a significant boost, now with up to 31 miles on a single charge – up from last year’s 22.4 miles.

The Pure Air Pro is also 500g lighter than last year’s e-scooter (17Kg) and it comes with Bluetooth support from the get-go. Another new feature is the addition of a USB-A charging port on the handlebar, which allows you to charge your phone or attach an additional USB front light. 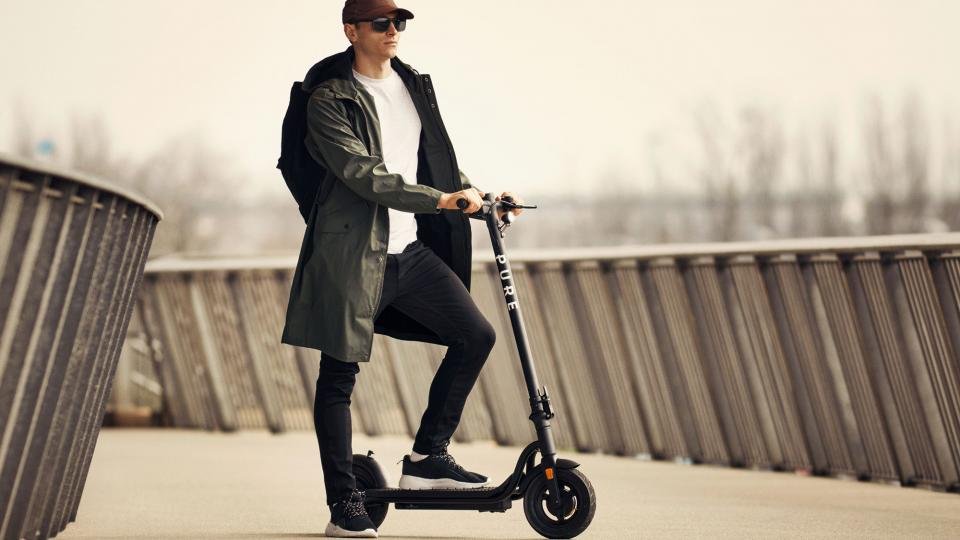 Thankfully, these tweaks and new additions don’t come at the expense of features we loved from last year’s model. This includes the IP65 dust- and water-resistance rating, a top speed of 15.5mph, 10in pneumatic wheels and a maximum rider weight of 120Kg.

Of course, I must make it clear that riding electric scooters is illegal on public roads and pavements in the UK, unless you ride on private land with the landowner’s permission. If you’re caught, you can be fined and receive points on your driving license.

In less pessimistic news, however, the Pure Air Pro costs a lot less at launch. Now priced at £599, the second-gen Pure Air Pro is £80 cheaper than what its predecessor cost hen it launched in July last year.

Perhaps the closest competitor in terms of features is the Xiaomi Pro 2, last year’s delightful e-scooter that currently on sale for £449 (down from its £600 price).

Put the two e-scooters next to one another, though, and the Xiaomi doesn’t come off quite as well. It has a lower mileage (28 miles), a weaker motor wattage (300W), smaller wheels (8.5in) and it also doesn’t have IP-rated water resistance either. Regardless, with a gigantic £150 saving, Xiaomi’s e-scooter remains a sorely tempting proposition nonetheless.

One thing that the Xiaomi has that the Pure Air Pro doesn’t, is a cruise control setting in the e-scooter’s companion app. This isn’t a huge omission, but it’s a feature that’s also available in other e-scooter models, such as the Ninebot Segway lineup.

The Pure Air Pro comes in two colours at launch – black and grey – with a special Kimoa-branded model launching later this year. Regardless of which version you choose, they each share the same black handlebar, front light, kickstand, wheels and front and rear wheel mudguards. 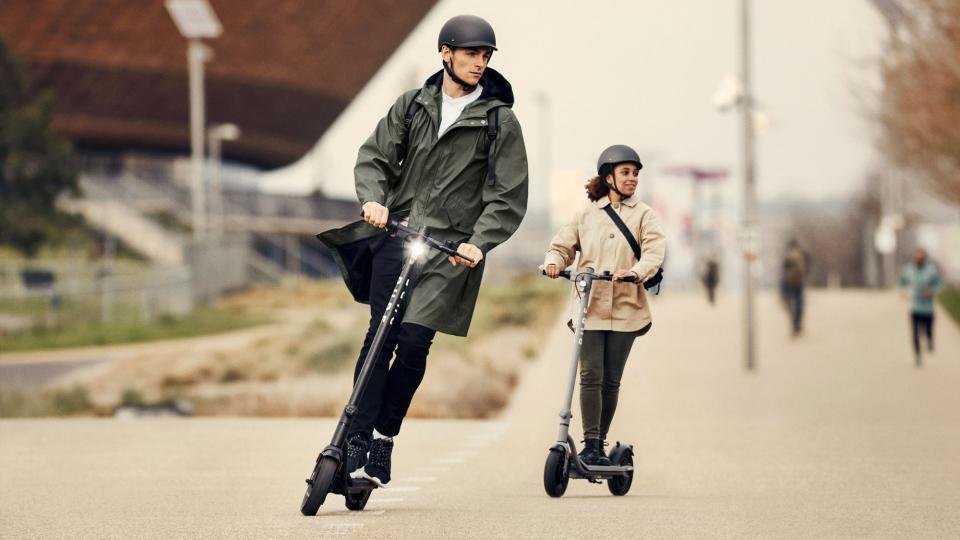 The scooter’s brake lever and bell are situated within easy reach of the left handle grip and a circular display is placed in the middle of the handlebar, with a single button to turn on the scooter and switch between its three riding modes. The single USB-A connector is located on the right, near the accelerator throttle.

One thing to note is that the scooter’s charging port has moved position, and is now located next to the rear wheel. In my tests, the battery took roughly eight-and-a-half hours to fully charge from empty.

If you own the original Pure Air Pro that launched last year, you’ll notice that this version looks noticeably different. In fact, in terms of design, it’s very similar to the Pure Air that launched this year.

When folded, the Pure Air Pro’s dimensions are similar to the Pure Air’s (116 x 50 x 51cm). It should fit nicely in most car boots, which is useful because the scooter is still quite heavy (16.5Kg) and difficult to carry for more than a few minutes.

During my tests, I found that the Medium mode provided the best balance of speed and battery life. After riding for about an hour (around five miles), mainly using the Medium and Fast modes, the Pure Air Pro’s remaining charge only dropped by 30%, with 20 miles left. 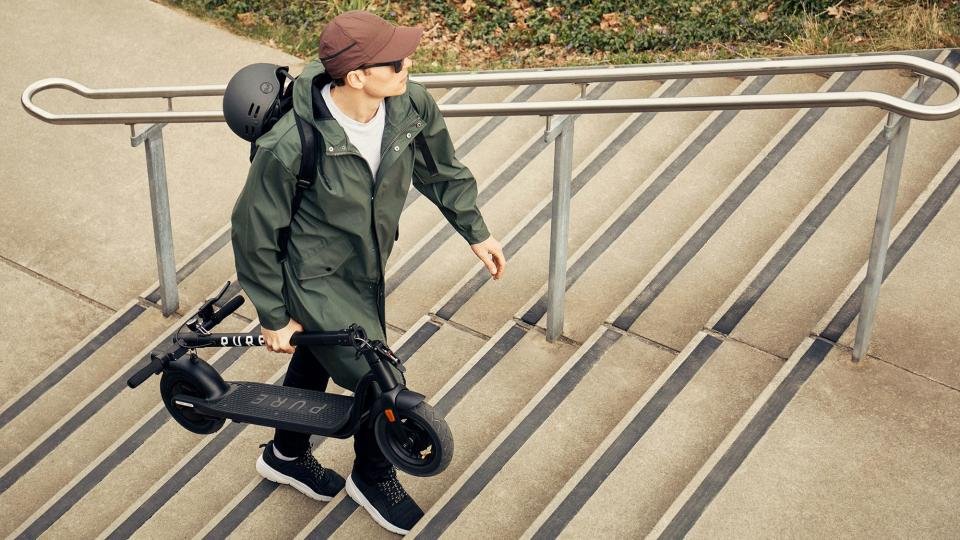 On that note, the e-scooter’s Bluetooth integration with the Pure Electric app grants access to a bunch of different settings and statistics, including a rough indication of how much CO2 you saved if you would have taken a car for the same journey.

The app also has options to activate the scooter’s motor lock feature and remotely toggle the headlight on and off. Neither setting worked particularly well, for me, though: the headlight kept turning on and off whenever I changed riding mode, and the motor lock only provided minimal resistance when activated – strangely, the Pure Air didn’t have this problem.

Just like its predecessor, the Pure Air Pro is a joy to ride. I recommend riding in Pedestrian mode for the first time if you’re an e-scooter newbie, otherwise Medium should be a good start before you graduate to the speedy Fast mode.

The advantage of this year’s upgraded motor is that it handles inclines without straining, even in the slightly slower Medium riding setting and it didn’t stall during my tests either.

As for acceleration, it takes about seven seconds for the Pure Air Pro to reach its top speed of 15.5mph, and pressing the brake lever brings you to a complete stop in about two seconds from max speed.

On that note, the Pure Air Pro’s braking system is particularly interesting. When the brake is pressed, a single drum brake is applied to the front wheel, with an extra electronic KERS brake at the back, which restores some power to the battery as it brings you to a halt. 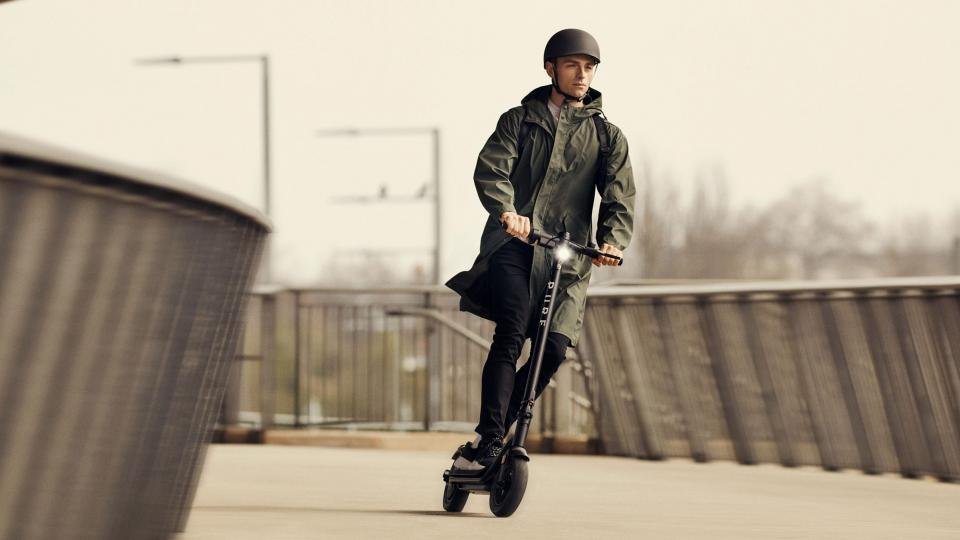 Comfort-wise, I definitely prefer the rubber handle grips on Xiaomi’s e-scooters over the foam grips on the Pure Air Pro, although this is only a small annoyance and likely something you wouldn’t notice unless you’ve ridden another e-scooter before. The Pure Air Pro’s handle grips can also be replaced if you’d prefer something a bit more comfortable.

Finally, the Pure Air Pro’s 10in pneumatic tyres ride well on almost every surface I tested, including mud roads and even grass, which is a surface that other e-scooters notoriously struggle with.

With the addition of a handful of much-needed changes at a lower launch price than the original, it’s no surprise that the Pure Air Pro can just about hold onto its position as our favourite electric scooter for at least a little while longer.

My only concern is that it’s almost identical to the Pure Air, which is £150 cheaper. The Pure Air has a weaker maximum range (18 miles) and weighs slightly more (17Kg) but otherwise you get everything you would with the Pure Air Pro, and you get to save a bunch of cash in the process, too.

In the end, it mostly boils down to how regularly you’re planning on riding your e-scooter and how far you’ll be travelling. The Pure Air is much better value on paper, but if you’re looking for an e-scooter that you won’t need to charge very often, then the Pure Air Pro is still an excellent choice.