A husband and wife took a long road trip — some 200 miles from Appleton, Wisconsin — to buy an electric bike from a new shop in downtown Wheaton.

Other out-of-town customers are willing to make the trek from New Lenox and Joliet.

Their enthusiasm for e-bikes has made the Pedego store exactly what it was intended to be: a destination breathing new life into the south side of the downtown.

The e-bike craze lured Jeff Alvis out of retirement from a career in management consulting. He shifted gears and opened the shop — the only Pedego dealer in the Western suburbs — after sensing a business opportunity last year when a friend brought him up to speed on the hot market for electric bikes.

Sales of e-bikes were up more than 190% in June compared with the same month in 2019, according to the NPD Group, a market researcher.

Alvis had his own anecdotal evidence that e-bikes were surging in popularity during the pandemic as people sought an escape and some fresh air. About a year and a half ago, Alvis, who lives in Wheaton near the Prairie Path, would see an electric bike every couple of days.

“Now I see one, at least one or more, every day when I’m out walking,” he said.

Alvis expected most customers would be baby boomer types because electric bikes provide an extra boost with a pedal-assist mode. Equipped with a quiet battery-powered motor, e-bikes take some of the legwork out of pedaling.

But Google search data recently showed that more than 41% of store inquiries are coming from people under 50, with several between 24 and 40, Alvis said. The City Commuter, black edition is one of the hottest-selling Pedego electric bikes at the new dealership in downtown Wheaton. Owner Jeff Alvis has a little fun on his as he rides around the shop on Liberty Drive.
– Mark Welsh | Staff Photographer

“We’ve had a lot of couples, either the man or the woman is a good bike rider and the other one doesn’t happen to be, but they want to ride together,” he said.

Virtually all of the bikes are categorized as Class 2, reaching regulated speeds of up to 20 mph. That’s why e-bikes hold appeal among people who want to replace short car trips with an environmentally friendly alternative.

Another customer from Naperville bought a bike from the Pedego dealership in Wheaton to ride 10 or 12 miles to work every day in Warrenville, Alvis said.

One of the most in-demand models among young and old alike is the Interceptor. In contrast to other e-bike options, it’s designed with handlebars that are a bit wider and slightly more oval-shaped to let users sit in a more upright position.

Customers are willing to make the investment, he said, because of the durability of the bikes — made of heavy-duty aluminum and steel — and a lifetime warranty on the frame and fork, the part that holds the front wheel.

“We really encourage them to try a few different styles because it’s so important in my mind that they feel very comfortable on the bike,” Alvis said. “And as I’ve mentioned to people, they’re going to have these for a long time.” 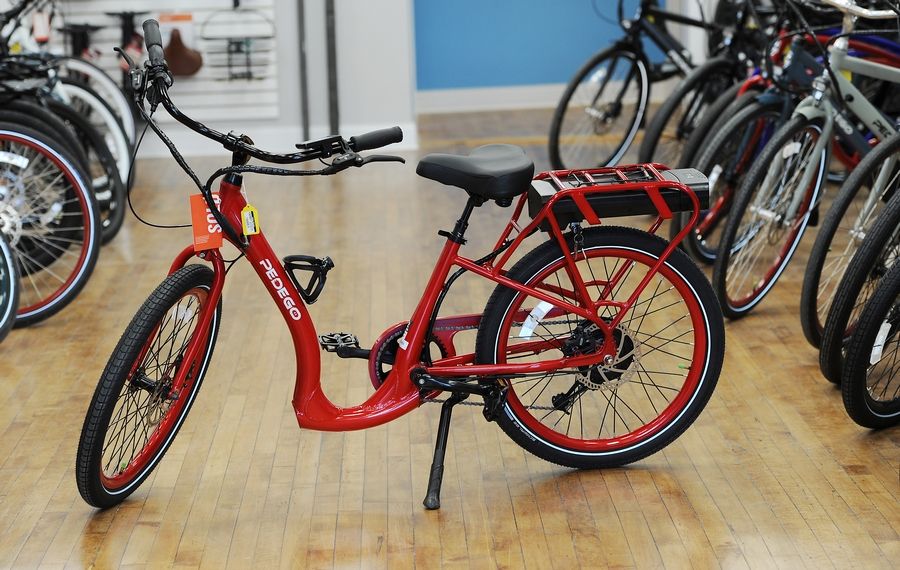 The Boomerang is another popular choice at the Pedego electric bike dealership in downtown Wheaton. “The step-thru is really, really low, so it enables someone to very easily get onto the bike,” owner Jeff Alvis said. “You’re not swinging your leg up over something.”
– Mark Welsh | Staff Photographer

Since opening, the store has started offering rentals of e-bikes for $25 an hour or $100 for the day. Customers can easily head out on a section of the Prairie Path running through the downtown.

“It takes a little bit of getting used to,” Alvis said of e-bike novices. “But most people come back after 15, 20 minutes riding around to see how they feel and talk about how easy it is to work the bike and how much fun it was.”

He’s discovered how much fun it is running a store with his wife, Andie, and their business partners, Bill and Karen Budicin, a couple from Lisle.

As a lifelong resident of Wheaton, Alvis wanted to contribute to the growth in the downtown core. Pedego owners are helping him do just that by making an outing of their visit to his store.

When another Pedego dealer didn’t have their must-have bike in stock, that couple from Wisconsin ended up driving down to Wheaton.

“They bought the bike,” Alvis said. “They went to Ivy, a nice restaurant here in town, had a great dinner and stayed overnight and drove home.”