The BMW Definition CE 04 Concept-based electric maxi-scooter has been spotted testing the near-production spec avatar with a possible global debut later this year. 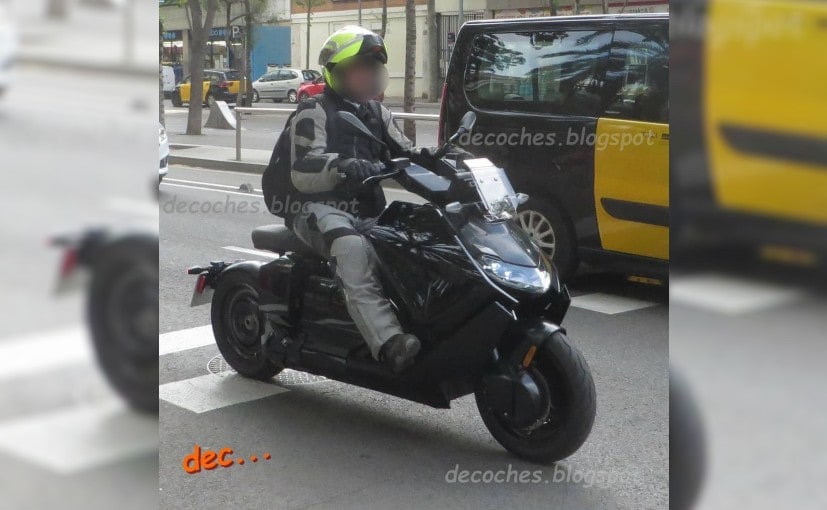 The radical-looking BMW electric maxi-scooter will be positioned as a fun, urban runabout

BMW Motorrad’s first all-electric offering on two wheels just might be an electric scooter. Based on the BMW Definition CE 04 Concept that was unveiled in November 2020 at EICMA, a near-production version of the electric vehicle was spied recently for the first time, and the spy images reveal a great deal about what we can come to expect from the radical-looking maxi-scooter. The production version of the BMW Definition CE 04 electric maxi-scooter looks identical to the concept with the manufacturer retailing all of the distinctive bits. The massive front apron with angular lines and deep creases with a V-shaped headlamp looks sharp and the low-slung design gives it a futuristic look. The seat position is more cruiser-like with the footpegs set at the front but the massive floorboard makes for a dual footrest position making it a more comfortable experience. The handlebar is raised and offers a relaxed riding posture.

We also like the floating pillion seat that stays true to the concept version. Other exterior bits include the boxy panels hiding the battery pack and electric motor while the rear wheel gets a tyre hugger that’s also holding the licence plate and turn indicators. Finally, the BMW CE 04-based electric scooter will come with a massive 10.25-inch TFT instrument console that will show a host of data and is likely to get connectivity tech as well. Details on the power and performance, as well as the range and charging times, remain under wraps for now. BMW Motorrad is tight-lipped but we do expect to hear something official later in the year. The model seems close to production and we do expect the manufacturer to position it as a fun, urban city runner while carrying the famed Motorrad DNA. It also gets out hopes up on what more can we expect from BMW in the electric mobility space. It needs to be seen if the company will consider bringing the CE 04-based electric scooter to India immediately after launch.