Every digital interaction these days is governed and tracked by a set of algorithms. These algorithms create the models and networks that tech companies use to build modern day digital products and services. But can an algorithm design an electric vehicle (EV) or an electric scooter?

That’s the question that electric vehicle startup Dispatch founders Rajit Arya and Navneeth Sabu Kannan set out to answer in February 2020, just a few months before the pandemic became the new reality for everyone in the world. But two years since its beginning, by February 2022, the company will be ready to go into production. This pace of development is rarely seen in the automobile sector, even for two-wheelers. For example, Bengaluru-based Ather Energy took four-five years to launch its first electric scooter model in 2018.

For Kannan, who has a transportation design background, using the algorithm to design was about proving that modern transportation systems necessitate a change in the automobile design process. “Usually, everything starts with a sketch on paper. But we didn’t use a single piece of paper in the design process. The smallest or the biggest auto company in the world starts with a sketch on paper, draws some design concepts and that’s how it starts. We were on CAD software from day one. There was no sketch,” he said.

CAD or computer-aided design software is the generic term for a number of industry-specific design software, which allow designers and developers to use computers to create, modify, analyse and optimise design.

Cofounder Arya added that because Dispatch applied engineering principles to design, the team managed to completely avoid the whole iteration loop involved in the design process, which is often the most time-consuming process. But there is another big reason why the algorithm approach sets Dispatch apart. Before we delve into that, let’s take a look at the first product coming from Dispatch’s stables. The Algorithm That Made Dispatch EVs

Businesses are today buying vehicles that are primarily designed for passenger use by Indian startups and auto makers for their operations. This is not giving them the cost savings that they should get with the EV investment.

The likes of Tiger Global-backed Ather Energy, Cotton Greaves-owned Ampere Vehicles, electric superbike maker Ultraviolette, Revolt, Okinawa, Tork Motors, Hero Electric, Bajaj Scooters, Honda and others have looked to make inroads into the passenger electric scooter market, with ride-hailing giant Ola also entering the segment this year, along with shared mobility startup Bounce. But on the flipside, none of these companies are directly catering to the commercial EV space which has grown, which is the niche that Dispatch wants to occupy, Arya pointed out.

Companies such as Amazon, Flipkart, Zomato, Swiggy, BigBasket and others have committed to increasing the share of EVs among their delivery fleet. Last year, Amazon said it would add 10K EVs made by Indian OEMs to its delivery operations in India by 2025. Similarly, Flipkart had announced that it would add 25K electric vehicles to its fleet. Eyeing a piece of this business, Bounce, Rapido and other mobility players that had thus far focussed only on consumer services have launched business-to-business (B2B) plays as well.

Unlike a typical electric two-wheeler, the Dispatch scooter is purpose-built for ride-sharing, delivery operations and other commercial use. The company has no intention to sell these to passengers or non-business users. With that vision in mind, the company created an algorithm that accounts for six major requirements for businesses looking to add EVs to their fleet.

“We used software that is used for architecture. It has not been used for the automotive space so far. Essentially, it’s integrated into CAD software. But instead of manually moving around stuff in the XYZ coordinate, you’re instructing the computer on the parameters that you can control which controls the entire model,” explained Navneeth, adding that the algorithm defines the parameters for the software, which is what the two cofounders wrote in the beginning. Here are the pillars on which the design is based. 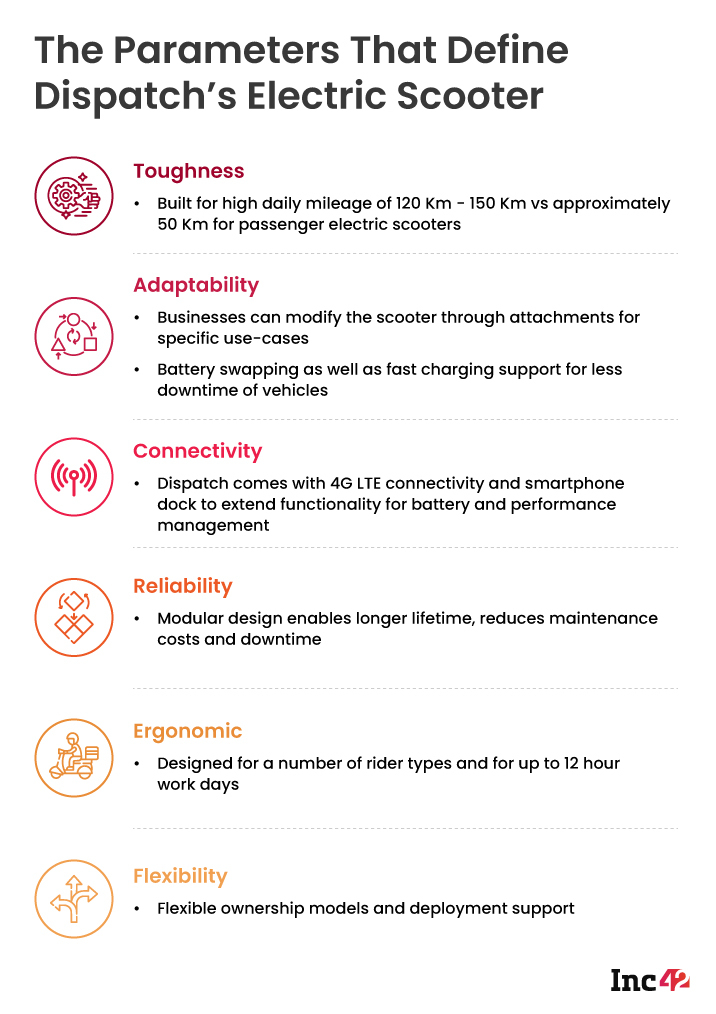 But according to Arya, there was another parameter — profitability — which guided each of the other aspects.

“Profitability was a design brief, which is very unique for a design team to be working on. We told them the end product needs to be profitable for a customer. That’s a critical area for us, given that our focus is business. The plain and simple goal is the product needs to make more money for them than what other EV two-wheelers are doing,” Dispatch cofounder Arya told Inc42.

The Dispatch scooter looks very different from other electric two-wheelers on the market — for one, it has a unique industrial design built with robust suspensions for ease of ride. The dashboard of the scooter is completely digital with a large dock for a smartphone or tablet. It comes with support for both charging depleted batteries as well as swapping it out, if the business has swapping infrastructure ready.

The Dispatch scooter will be launching in three variants — primarily classified on the basis of the top speed. The scooter with a top speed of 45 KM per hour (kmph) has a range of 200 Km on a single charge; the one with 60 kmph top speed can go up to 155 Km on a single charge, while the fastest model (86 kmph) can go for 120 Km per charge. The vehicle is rated for a load of 200 Kg including the rider.

In terms of the cost for businesses, the Dispatch cofounder claimed that its clients will see higher cost savings due to the fact that the design of the scooter is geared towards helping businesses maximise their spending. Besides this, he indicated that the company will have a unique selling model, which will help businesses reduce procurement costs. The company’s website also claims flexible ownership model to be a key USP, however, Arya did not reveal further details about how it will reduce the total cost of ownership.

The company claims to provide savings of INR 50K per year per scooter for businesses that have a daily use-case of 75 Km per scooter, but Arya says in some cities, food delivery operations or ride-sharing involve daily scooter mileage of up to 150 Km, in which case the savings will be higher and could even go up to INR 1 Lakh per year per vehicle when compared to an electric scooter which is built primarily for passenger use.

He did mention that as EVs go, the charging cost is the same for all vehicles, so the real savings come in the running costs of the vehicle and its maintenance (time and costs), which is where Dispatch is looking to make a difference.

The Dispatch Journey So Far

While Arya and Kannan only began working on Dispatch as a product and a business model in February 2020, the founders had experience of working in the space together at mobility solutions startup Artem, which was founded in 2016. At Artem, the model was completely different, but Arya said the base carried forward to Dispatch was the experience and knowhow. In terms of resources, the duo had to start from scratch, but the company is still associated with Artem Energy Future Private Limited, as per its website.

In the first few weeks, it was just the two founders who were leading the design and product efforts, before a team was brought on board to work on the designs created by the software and the cofounders. Registered in Ahmedabad, with the headquarters in Mumbai and a core team in Bengaluru, Dispatch has a total of 20 employees today, with some working remotely besides from an office in Bengaluru.

A team of 20 seems extremely small for the space. In the automobile industry, just like often in software product development, there’s a huge disconnect between design and engineering. And it becomes an iterative loop between designer, modeler and the engineer, with feedback being passed back down the chain. That loop was thrown out of the window with the engineering practices adopted in the design process.

“Our target timelines were shorter than what the industry typically takes. Because this is an opportunity now and we could not wait for 4-5 years so we had a two-year timeline for production. And we have achieved that with this approach and we are ready to go into production at scale by the end of the year.” Arya added.

Leveraging technology at the design stage allowed Dispatch to accommodate a range of use-cases for its potential clients. The scooter in its current form can be used for deliveries without any attachments, but the company has allowed for the bike to be branded in the potential client’s colours and it also has a range of attachments that can be used to extend the functionality of the bike. It can even take on hot or cold storage boxes for perishables. For example, one of the designs shows a mini Subway kitchen possibly being attached to the bike. Similarly, Dispatch envisions medical first aid kits or other indicators for institutional sales to emergency services or law enforcement.

For its initial pilot, where it will test the market feedback and make changes based on on-ground data, the company is roping in food delivery, ecommerce delivery as well as ride-sharing companies in the pilot. “We will be running a beta programme for testing across multiple phases before the production. We will be working closely with the businesses to help them with infrastructure support for charging and swapping.”

The opportunity that Arya referred to earlier in the electric vehicle space is here because India’s businesses are seeing the cost benefits of going electric. The use of EV two-wheelers and three-wheelers has fast outpaced the passenger or personal usage adoption, even if the likes of Tesla are eyeing the Indian market today. In India, commercial vehicles are predicted to have a market share of 70% within the EV space by 2030 as per Inc42 Plus analysis.

This has made commercial EVs, particularly two-wheelers, the flagbearer of the electric mobility ecosystem in India. Besides a slew of startups looking to launch new electric two-wheelers for commercial and passenger use, even major automobile makers have been eyeing new launches in this segment, making it one of the most active areas of development in the overall automobile sector.

Despite the presence of numerous EV two-wheeler makers that have looked to drive the market with new launches, the sale of electric two-wheelers in India declined by 5.4% to 25,735 units in 2020 as the majority of the year was clouded by Covid-19. This resulted in a slowdown in purchase activities as well as importing of components from China. According to data shared by Society of Manufacturers of Electric Vehicles (SMEV),  27,224 units of high-speed electric two-wheelers were sold in 2019.

“Things are taking shape even in the personal mobility space, but the gestation period is much longer, because that is a demand-creation play. To make people transition to EVs is going to take slightly longer. It’s already been around for many years and not succeeded, because of product, quality or awareness issues.” he added.

Beyond its first scooter, Dispatch is looking to launch more products in the next couple of years. To get there, the company is looking to raise funds. So far it has not raised any external capital but it is in talks with investors for its maiden round. “We are still exploring how much money we want to raise right now we know how much we need, but we are still exploring our roadmap for that. We are trying to expand to a slightly longer runway.”

It is aiming to launch a lightweight scooter in 2022 for less intensive use-cases, which has a lot of shared components with the first model. Four wheelers are also on the cards, in the form of a medium commercial vehicle (MCV) and light commercial vehicle (LCV), which are likely to be production ready by 2024. With these the company is primarily targeting the cargo transportation space, but it also has applications in people transportation.