Pure Air electric scooter review: What you need to know

The original Pure Air – our best budget electric scooter last year – was already pretty much the complete package, so it’s no surprise that Pure Electric has instead decided to add a few tweaks, rather than completely reinventing the wheel.

The biggest change comes from within, since last year’s 250W motor is now replaced by a significantly more powerful 500W unit. The scooter has a larger 36V Li-ion battery as well, which, according to Pure Electric, has increased the charging time to five-and-a-half hours from empty. 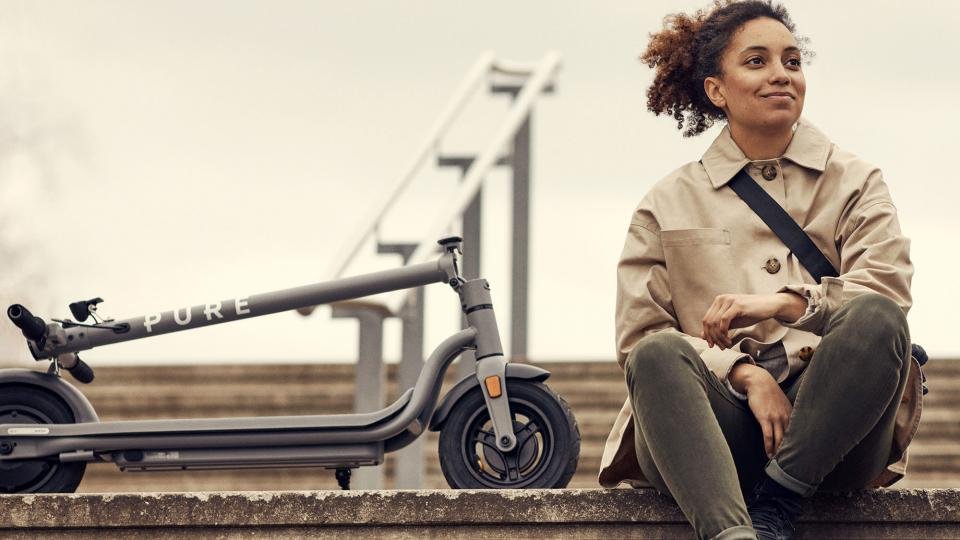 The company has also added Bluetooth integration from the get-go, which was a feature that only made its way to last year’s model a few months after release. A standard USB-A charging port can now be found on the scooter handlebar, too, which can be used to charge your smartphone while on the go.

It’s worth noting that, while rental e-scooter schemes have begun to crop up in several British cities, private electric scooters are currently illegal to use unless you ride on private land with the landowner’s permission. Riders caught can be fined and receive points on their driving license.

The second-generation Pure Air costs £449, which is £50 more than what last year’s model cost at launch. Its biggest competition is the Halfords Carrera impel is-1, which costs a bit less at £399.

Comparatively speaking, though, the Carrera is a slightly weaker package overall, so it could be worth forking out the extra cash. The Pure Air has a more powerful motor (500W compared to 350W) and larger wheels (10in compared to 8.5in).

The Carrera comes with a handful of extra security features, however, such as an in-built alarm system and integrated cable lock. Both e-scooters are water-resistant, can accommodate a maximum load of 120Kg, but they also weigh a rather back-breaking 17Kg.

A lighter alternative is the cheaper Xiaomi 1S (£379), which weighs just 12.5Kg. Although, unlike the Carrera and Pure Air, this e-scooter isn’t waterproof, has a less powerful motor (250W) and has a slightly reduced weight limit (100Kg).

The Pure Air comes in a choice of two colours: black and grey. We received the black model for review, although if I was being picky I prefer the contrasting colours of the grey model, since they both share a black handlebar and front light, black stand and black mudguards. 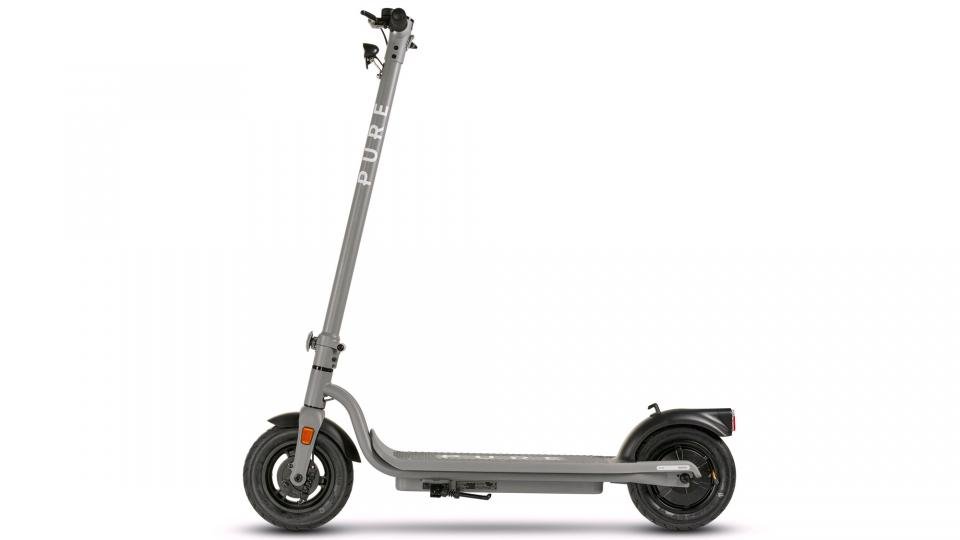 As for ergonomics, the e-scooter’s single brake and bell are located within easy reach of the left grip, with a small display panel situated in the middle of the handlebar. The USB charging port, which can supply power to your smartphone or any external lights, is situated to the left of the throttle.

As for the folding mechanism, the method is slightly different to other e-scooters we’ve tested. Thankfully, it’s quite straightforward and requires very little effort. If you want to fold it up, you first need to unscrew the circular U-clamp above the front wheel, and fold the stem inwards. You then attach the silver ring on the front of the handlebar, to hook on the rear wheel. When folded, the Pure Air’s dimensions are a car-boot-friendly 116 x 50 x 51cm.

A minor change to the Pure Air’s aesthetics this year is that the second-gen model now has reflectors on either side of the front wheel for added visibility when riding in the dark. The 1W front light is also quite bright, and you can manually adjust its angle as well. Finally, the standing deck (50cm) is wide enough to fit even the largest of feet.

When switched on, the scooter’s LED display shows your speed (mph), riding mode, headlight indicator and battery status. The Pure Air has three different riding speeds: Pedestrian (4mph), Medium (12mph) and Fast (15.5mph). In my testing, I found that the e-scooter’s Medium mode was more than sufficient for my travels, offering plenty of speed while preserving battery life. 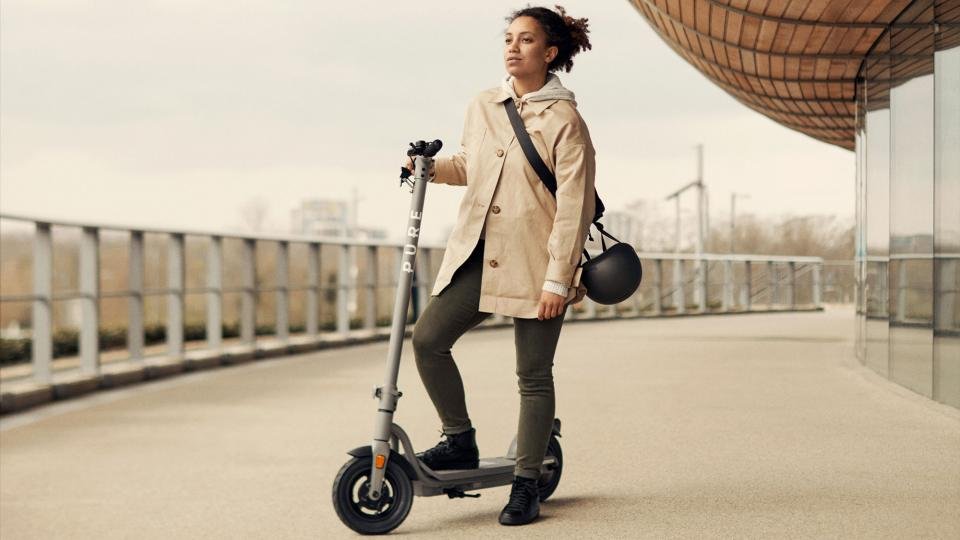 As I mentioned earlier, the Pure Air now comes with Bluetooth connectivity as standard. This allows you to access other useful tidbits of information, such as the estimated remaining range and even get a rough indication of how much CO2 you’ve saved on your journey compared to using a car. You can also activate the e-scooter’s motor lock via the app, but unfortunately there’s no option to enable cruise control.

When it comes to riding, the Pure Air feels fast and swift. Even on steep inclines, the scooter didn’t seem to break a sweat, and I only needed to switch to the scooter’s fastest speed setting once or twice during my tests. Activating the Pure Air’s e-brake (located on the left grip) brought me to a complete stop in roughly two seconds while riding at top speed.

The Pure Air’s 10in pneumatic tires did a good job at tackling a variety of different surface textures, even managing to achieve decent traction on wet grass, which is something other scooters notoriously struggle with.

The riding experience felt nice and smooth, too, especially since rival e-scooters often use solid rubber tires, which can often amplify bumps in the path. With an official IP rating of IP65, the Pure Air is both dust- and waterproof, and it also comes with a 12-month warranty, too, which covers use in light rain.

It’s no surprise that the Pure Air comfortably keeps hold of the value e-scooter crown for a second time. The price increase is a slight concern, but for the money you’re getting a well-put-together electric scooter that’s rich with features.

It’s not the lightest e-scooter, mind you, so you might want to consider the Xiaomi 1S if you’re planning on lugging it in and out of a car boot on a regular basis. Cruise control would have been a nice addition, too, but generally speaking the Pure Air simply can’t be beaten when it comes to sheer value for money. 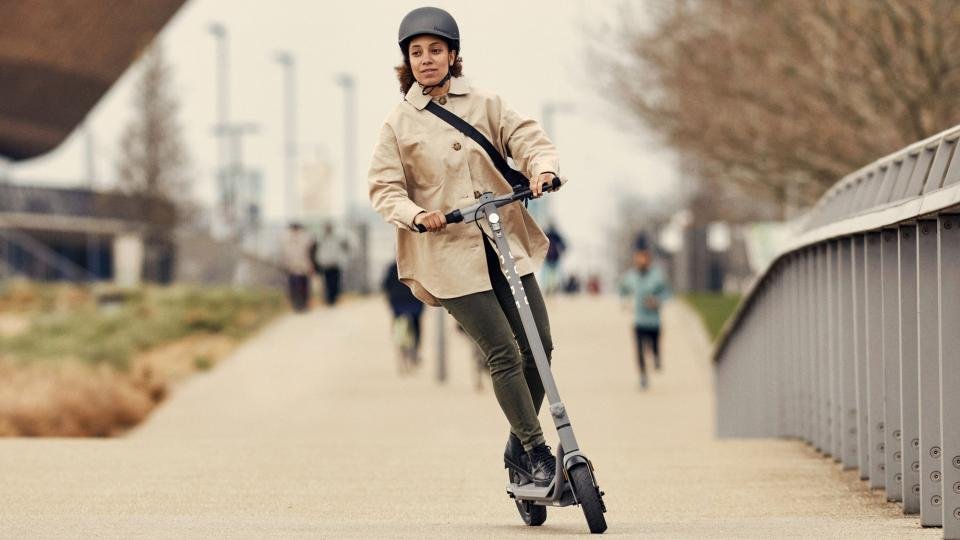