Well known for its Carrera bikes, UK retailer Halfords put this expertise and technical know-how into electric scooters for the first time, launching the Carrera impel is-1 in February. But does this scooter have what it takes to rub shoulders with the best electric scooters in the market?

Carrera impel is-1 electric scooter review: What you need to know

The (oddly-named) Carrera impel is-1 is a robust, no-nonsense electric scooter with an intriguing double-braking system. The mainframe is protected by a lifetime guarantee at Halfords, and the scooter also comes equipped with an in-built electronic alarm system and integrated cable lock. 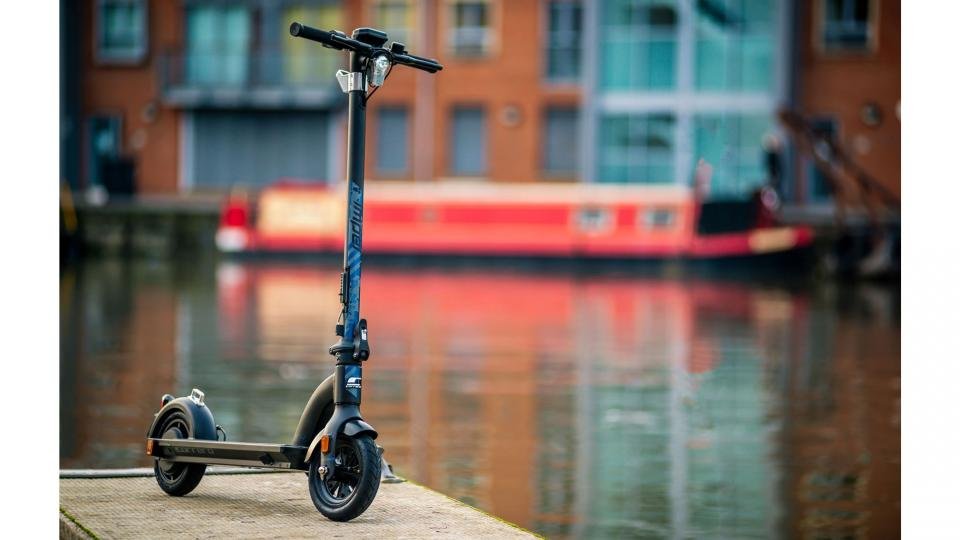 The scooter has a 350W motor and 8.5in pneumatic tyres, as well as a 36v 7.8Ah battery with an 18.6-mile maximum range. It also has an IPX5 weather-resistance rating.

Before we move into the main portion of this review, it’s important to clarify that electric scooters are classified as Personal Light Electric Vehicles (PLEVs) in the UK and therefore illegal to ride unless you’re on private land with the landowner’s permission.

The impel is-1 is available for £399 exclusively from Halfords in the UK. It’s £20 more expensive than the Xiaomi 1S (currently on offer for £379), but it’s well worth the slight bump in price for a more powerful 350W motor (compared to 250W), dual-brake system and in-built security alarm and cable lock.

For £50 more, the new Pure Air Second Generation comes into play, with a 500W motor offering more power and larger 10in pneumatic tyres over the impel’s 8.5in. It also has an IP rating of IP65, which means it has added dust protection. However, the Pure Air doesn’t have the built-in lock and alarm, or the dual-braking system that the Carrera impel is-1 does.

If you can stretch your buying budget to £449, then the Xiaomi Pro 2 comes with a longer 28-mile range per charge and an accompanying Bluetooth app with extra features.

The Carrera impel is-1 is incredibly easy to set up. After unfolding it, a clip on the base of the stem locks automatically into place, before you push another lever into position over the top. From here, you’re pretty much good to go. 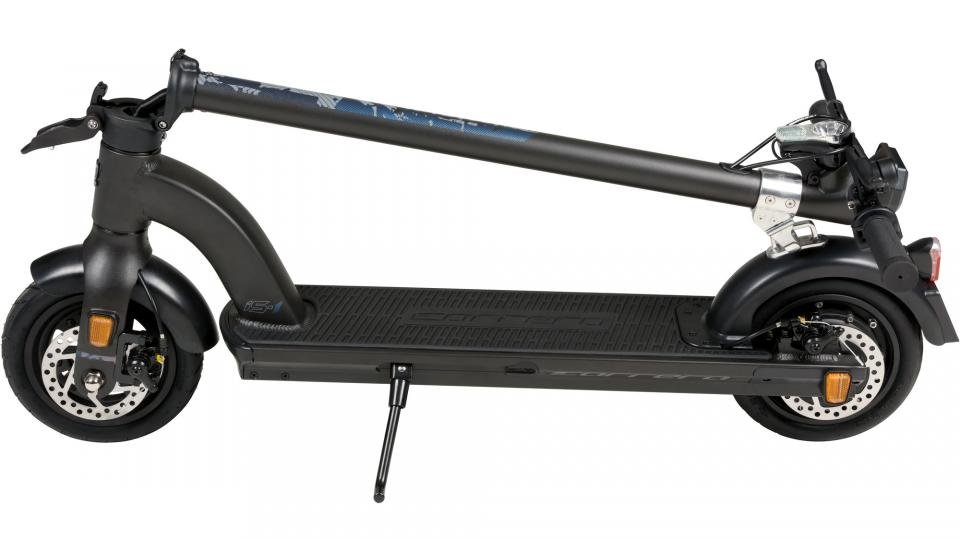 Once upright and assembled, the scooter is striking with some design elements reminiscent of a mountain bike – a firm nod to Halford’s Carrera heritage that makes you want to hit the muddy trails.

The electric scooter’s matte black finish is broken up by chunky metal features, including a large buckle on the rear mudguard. This gives the scooter an urban edge, rather than the sleeker, aerodynamic look of other e-scooter models. The standing deck – at 17cm wide and 44cm long – is larger than most, too, giving you ample legroom.

Safety features include reflectors on either side of each wheel, as well as an integrated cable lock, which can be easily pulled out, wrapped around something and locked in place with a combination barrel.

The Carrera’s accelerator throttle is located next to the right handle grip, with a small control pad next to the left-hand grip. This includes the power switch and buttons to move up and down through the four-speed levels. The small LED display in the middle of the handlebars shows your speed, speed level, battery status and miles travelled.

There are two brake levers on the left and right grips – similar to those on a bike – which control the front and rear disc brakes. A bell is within easy reach of the left handle grip, too.

The 8.5in pneumatic tyres are a decent size, while the battery (found under the standing deck) provides a maximum range of 18.6 miles per charge. In my testing, the scooter took roughly four hours to charge from empty.

At 17kg, the scooter is quite heavy and not something you would want to carry for long – although thankfully it should easily fit in most car boots when folded.

The Carrera impel is-1 comes with a water resistance rating of IPX5, which Halfords says makes it water- and rain-proof. It’s worth mentioning that you can void the warranty of most electric scooters – apart from Pure Air’s offerings – if you ride them in wet weather, so the impel is-1 stands out in that regard. 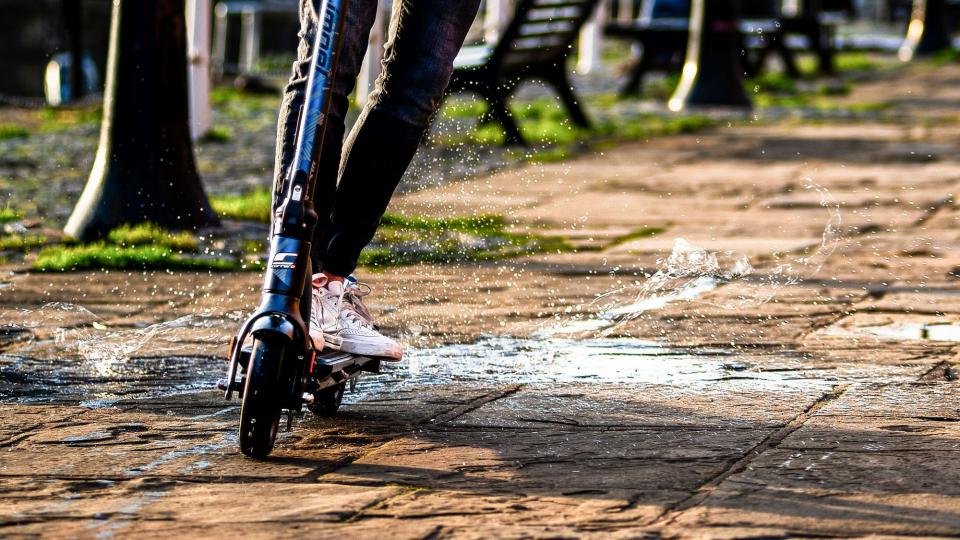 For added security, you can set an alarm to go off if you don’t input the correct three-digit code when you power up the scooter.

Disappointingly, the Carrera doesn’t have an accompanying app, which now comes as standard with most of the top e-scooter models. This means you miss out on more precise stats including how much mileage is left on your charge, as well as a lack of cruise control and remote motor lock options.

Most e-scooters only require a kickstart to move, but with the Carrera impel is-1 you first need to turn on the power and punch in the code to switch off the immobiliser before setting off.

The scooter is set to level riding mode 1 by default, which gets you up to speeds of around 4mph. This feels very slow, so you’ll likely want to change up quite quickly as you get going.

I reached speeds of around 8mph on level 2, 12mph on level 3 and over 16.5mph downhill, on level 4, despite a stated maximum speed of 15.5mph. This seems fast, but the sturdiness of the e-scooter doesn’t make this feel excessive or risky at all. I found a combination of level 2 and 3 speeds more than adequate for getting around, though.

Switching speeds while riding is a breeze, too. The control pad, in a similar position to a gear lever on a bike, can be used with just your thumb, cycling through the various speed levels while still holding the grip. 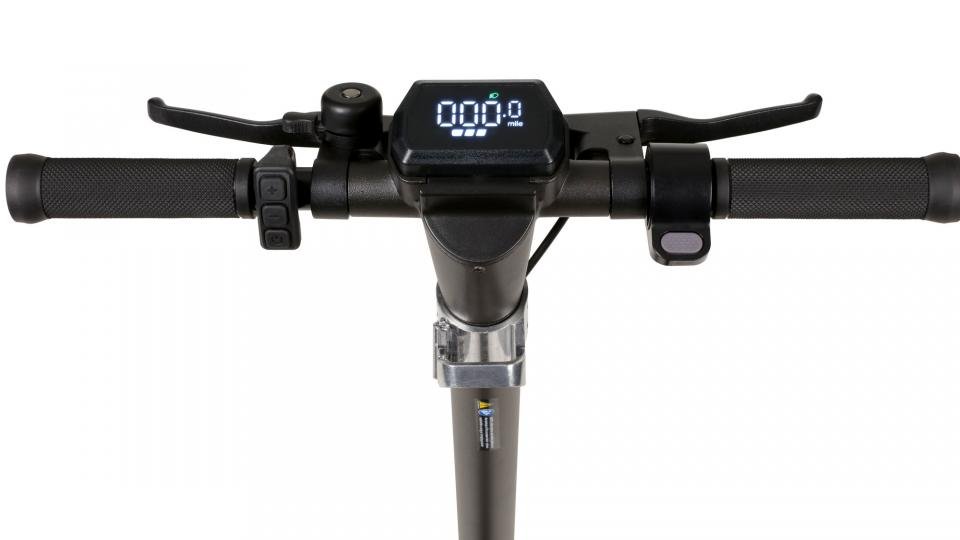 This makes a major difference to your ride and unlike some models, stops you from needing to take your hand off the scooter to operate the display panel to move through different modes.

The scooter feels well-made and powerful and the large 350W motor did a great job of getting me up most inclines. At 8.5in, the pneumatic tyres are smaller than other models, so you do feel the odd bump in the road, but it’s not anything that I found really affected the ride.

The front and back disc brakes do a great job of stopping the e-scooter quickly and safely when cruising at speed. As for stamina, after about an hour of riding –  mainly on speed level 3 – I was pleased to find there were about three bars of battery life left.

The Carrera impel is-1 is a well-made e-scooter that feels solid, safe and packs a punch. The front and rear brakes with a separate thumb pad to switch up speed levels help you feel more in control, while an alarm system and integrated cable lock provide added security features that most other e-scooters don’t have.

The only niggles I have come from its weight and lack of a companion app. At 17kg, it’s very heavy and not easy to carry for a prolonged period of time. These issues aside, though, the Carrera impel is-1 is a comfortable, fun ride for a good price, with a wealth of added features.