A special purpose acquisition company called Switchback II Corp. will take Bird public and provide as much as $428 million in funding to the business. The deal has an enterprise value of about $2.3 billion, the companies said in a statement Wednesday.

The transaction includes private funding from Fidelity Investments, which had previously backed Bird, as well as a credit facility from other firms.

A former Uber Technologies Inc. executive, Travis VanderZanden, helped start Bird in 2017. It dropped electric scooters onto the sidewalks of major cities and let customers remotely unlock and rent them using an app. The model was widely copied, including by Uber, and turned Bird into one of the fastest startups to reach a $1 billion valuation.

It took only a few years for the scooter fad to fade. Bird and its closest competitor, Lime, cut staff and dialed back operations. Uber also retreated. The coronavirus pandemic dealt a further blow when people curbed travel and fled the city centers that scooter companies occupy.

SPACs provide a path to fundraising and the public markets seen as more friendly to cash-burning companies. Last year was by far the biggest for such deals, which have slowed in 2021. Bloomberg first reported in November that Bird was in early-stage talks to merge with a SPAC.

Switchback II listed in January and at first indicated it would seek to combine with an energy company. The investment firm’s leaders, CEO Scott McNeill and chief commercial officer Jim Mutrie, in March took the EV charging station maker ChargePoint Inc. public with another Switchback-named SPAC. 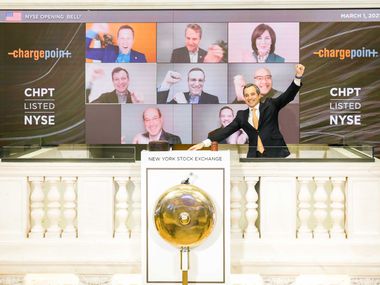 McNeill and Mutrie were formerly executives at RSP Permian, a Dallas oil producer that was sold to Concho Resources in 2018 for $9.5 billion.

In a statement, Bird highlighted its green-energy bona fides and said it would introduce additional vehicle options, such as bikes, in a bid to reduce use of gasoline-powered cars.

“We plan to scale our platform to provide our low-carbon transportation services to more people in more cities around the world,” said Jasmine Wallsmith, a spokeswoman for Bird.

The backing from Fidelity represents an apparent reversal for the investment firm. In December, Fidelity was reported to be looking to unload some Bird shares at a loss.