British company Riley Scooters may be new to the e-scooter scene but it has ambitious plans. The startup recently released two electric scooters, the Riley RS1 and the Riley RS2, with further launches planned for later this year. This review focuses on the cheaper, entry-level RS1, which has less range than the RS2, but shares most of the same features, including an innovative, quick-release battery.

Riley RS1 electric scooter review: What you need to know

The Riley RS1’s specifications are solid, but not spectacular. It has a 350W motor, which is what you’d expect at the price, and large 10in puncture-resistant pneumatic tyres. However, it lacks a companion app and, with only a 36V 6.4Ah battery (230Wh), its range tops out at only 15.5-miles. The main difference between Riley RS1 and RS2 (black model below) is a bigger battery pack that extends the latter’s range by around 12 miles. 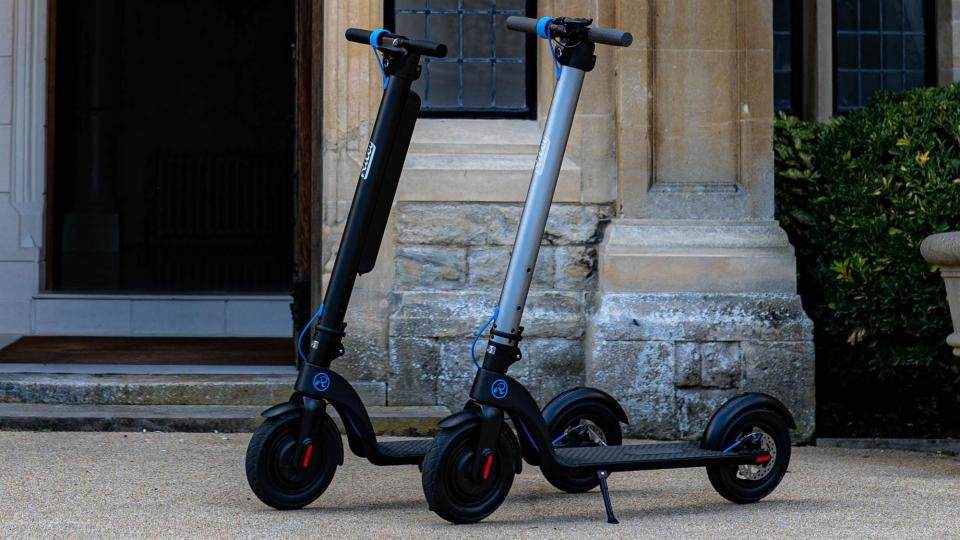 The range on the Riley RS1 electric scooter is quite short when compared to our best electric scooters but the beauty of this model is that its Panasonic battery pack is detachable and easily replaced. This means you can purchase spares for £100 and swap them if you need to travel longer distances without recharging.

Before we go any further, it is important to clarify that electric scooters are classified as Personal Light Electric Vehicles (PLEVs) and therefore illegal to ride in the UK unless you’re riding on private land with the landowner’s permission. Offenders caught could be penalised and receive points on their driving license. In contrast, e-scooters are legal in most European countries and US states. We recommend riders always wear a helmet and follow the manufacturer’s safety guidelines before riding.

The Riley RS1 costs £399 and is available directly from Riley Scooters. That’s £20 more expensive than the similar Xiaomi 1S but it’s worth paying the extra because it has a more powerful 350W motor (vs 250W) and larger 10in pneumatic tyres (vs 8.5in), which ride more smoothly on rough surfaces.

However, if you can stretch your budget by £50, then the Pure Air and Xiaomi Pro 2 come into the equation. The former has a more powerful 500W motor and water resistance for riding in the rain, while the latter has nearly double the range. Both boast Bluetooth connectivity.

Both these e-scooters are cheaper than the Riley RS2 that costs £499, has the same 350W motor, can’t be ridden in the rain and doesn’t have an accompanying Bluetooth app. 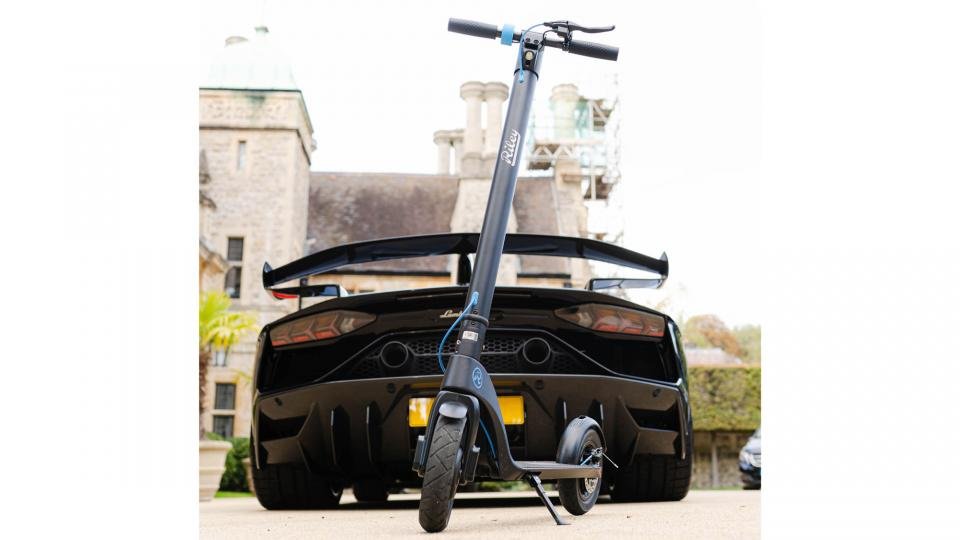 The Riley RS1 is quick and easy to set up out of the box. After unfolding it into the upright position, all you do is rotate the ring at the bottom of the stem to lock it into place, tighten some screws and attach the grips.

The RS1’s bright blue cabling is a nice touch, matching the colour of the thumb throttle accelerator on the right of the handlebar and logo on the stem. The chunky, aluminium stem looks the part, too. It’s much broader than other e-scooters we’ve tested but it lends the RS1 a purposeful, robust look.

The thick stem is about more than mere aesthetics, though. Hidden away inside is the scooter’s battery, which can be accessed fairly easily by lifting the dashboard cover.

The position of the battery not only makes it easy to replace but also means it’s better protected than on most e-scooters, where it’s positioned beneath the base plate. It’s quick to charge, too, charging from empty to 100% in just over two hours.

Elsewhere, there’s an LED display on the steering stem, which displays your current speed, riding mode and battery life. There are bright front and back LED lights, a loud bell attached to the base of the brake lever, and the scooter folds up quickly and neatly.

The scooter has three riding modes, each of which limits the maximum speed. In the Beginner mode, it tops out at a slow 6mph; in Normal mode it’s 9mph; and in Sport mode, the scooter reaches a maximum of 15.5mph. 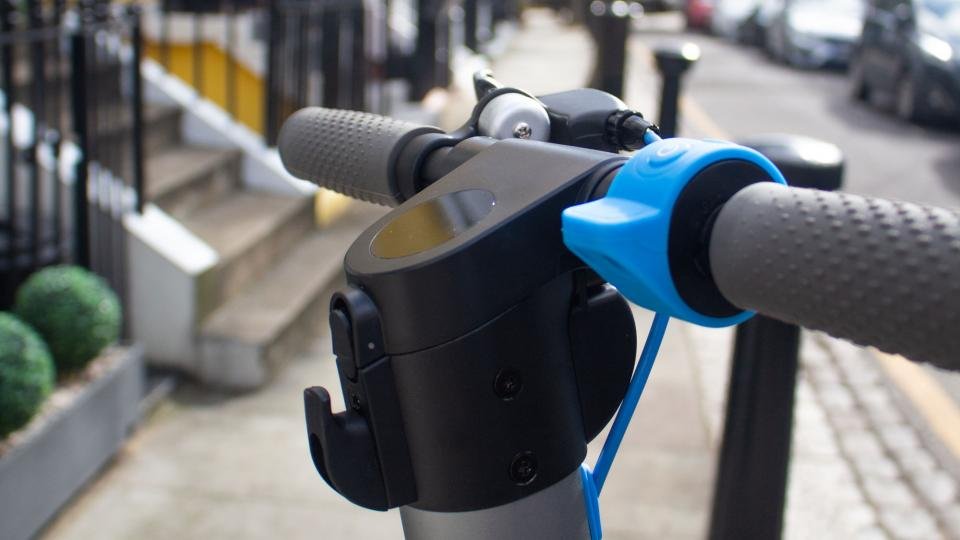 One of the scooter’s standout features is Cruise Control. Unlike the Xiaomi models, where you first have to activate this feature within the app, it’s enabled by default, engaging whenever you keep the throttle held down for six seconds. Pulling the brake lever disables the feature but it remains engaged if you push down the rear mudguard to brake, instead.

Disappointingly, the RS1 doesn’t have an accompanying app, so you miss out on extras such as remote motor lock, easy firmware updates and more precise stats such as range estimates and total mileage ridden.

After switching on the e-scooter on, a quick kick-start and press of the throttle gets you moving forward. The scooter is set by default to Beginner mode, which is very slow at 6mph, so you’ll want to switch it into Normal or Sports mode straight away.

Other than that, I found acceleration was very smooth and the ride comfortable, with the 10in pneumatic tyres doing a good job of gliding over bumps in the road. The scooter’s 350W motor is best experienced in Sports mode, which makes a huge difference when accelerating from standstill and climbing hills. For example, I could climb up small hills easily in Sports mode, but found the scooter came to a gradual halt when going up the same hills in Normal mode.

The maximum range per charge is specified as 15.5 miles, so it was disappointing to be down to my last battery bar after just four miles in Sports mode. If you need to be in the ultra-slow Beginner mode to reach this type of range, you’ll be doing a lot of charging. 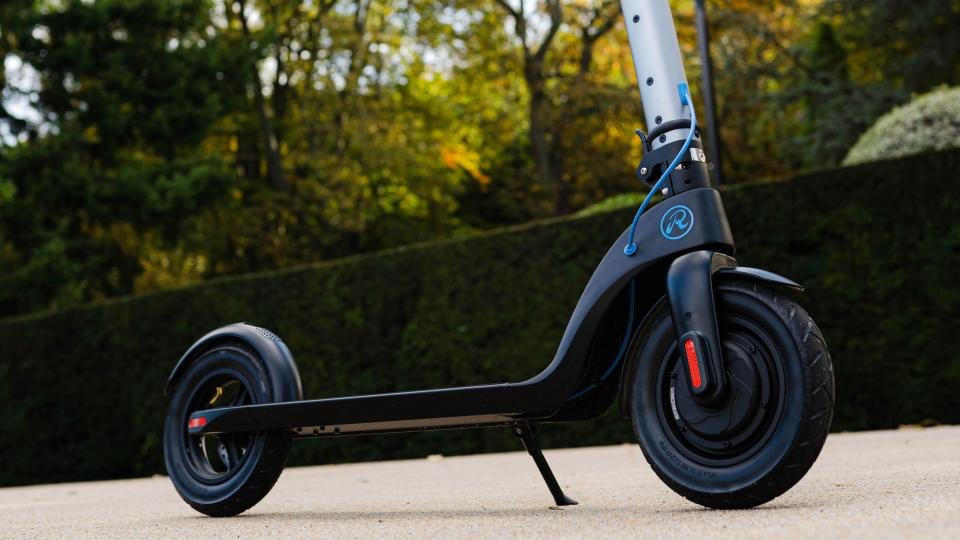 Of course, the beauty of the Riley RS1 is that you can swap the battery, so you may want to invest in a spare early on, or consider buying the more expensive RS2 which promises a maximum 28 mile-range per charge. After a recharge, I spent the next stint in Normal mode and the range was thankfully a lot better, with a few bars still remaining after a six-mile ride.

The triple braking system, meanwhile, works pretty well. Your main source of stopping power is the lever-operated, cable rear disc brake, which brings the scooter to a halt quickly and securely when travelling at speed. The E-ABS brake helps you regulate speed going downhill, while also recharging the battery. And you can also brake by pushing down on the rear mudguard. The disc brakes did make a slight squeaking sound when using them going downhill at speed, but I didn’t find this a major issue.

The Riley RS1 is a solid e-scooter and makes for a comfortable ride. It is quick and easy to set up and boasts a powerful 350W motor for a decent price. Cruise control at the touch of a button is a great feature, and the triple braking system means you won’t have any problems stopping.

The best feature of the RS1 is the ability to quickly and easily swap batteries. Housing the battery in the stem keeps it away from puddles and knocks, too.

Unfortunately, the Riley RS1’s biggest strength is ultimately its downfall because the capacity of that battery is pitiful compared with its closest rivals. Instead, I’d point you at the Xiaomi Pro 2, which costs only £49 more, has nearly double the range by default, and comes with Bluetooth connectivity as well.