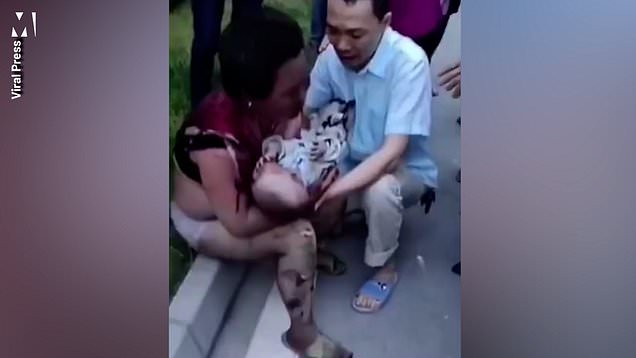 To view this video please enable JavaScript, and consider upgrading to a web
browser that
supports HTML5
video

A baby girl and her grandma were left seriously injured after an electric bike caught fire inside a lift in China.

One of the lift’s occupants presses the ‘open door’ button as the smoke emerges in the cramped space – but it was too late for everyone to get out.

The bike sparked into flames only seconds later and five people were injured and rushed to the West China Hospital for treatment.

They are all now stable, but a baby girl and her 54-year-old grandma were reportedly left with third-degree burns and 75% of their bodies injured by fire.

A police officer told local media the cause of the fire was still unknown and the building management had marked the elevator out of service while the incident was investigated.

‘The cause of the fire is still unknown,’ he said, ‘The elevator is still out of service.

‘Residents who own electric cars charge their bikes on the corridor near the lift so they usually ride that unit to reach upper floors.’

He added the lift was already on the seventh floor when the vehicle suddenly showed signs of overheating.

‘The man who owned the bike entered the lift from the seventh floor,’ the officer said.

‘He said the electric vehicle was fine before that so he did not know why it could have caught fire.’

China Bicycle Association and Bike Europe date estimates there are around 265 million electric bikes being used in China, about 10 million in Europe, and at least 1 million in the US.

Get in touch with our news team by emailing us at webnews@metro.co.uk.

For more stories like this, check our news page.

Get your need-to-know
latest news, feel-good stories, analysis and more