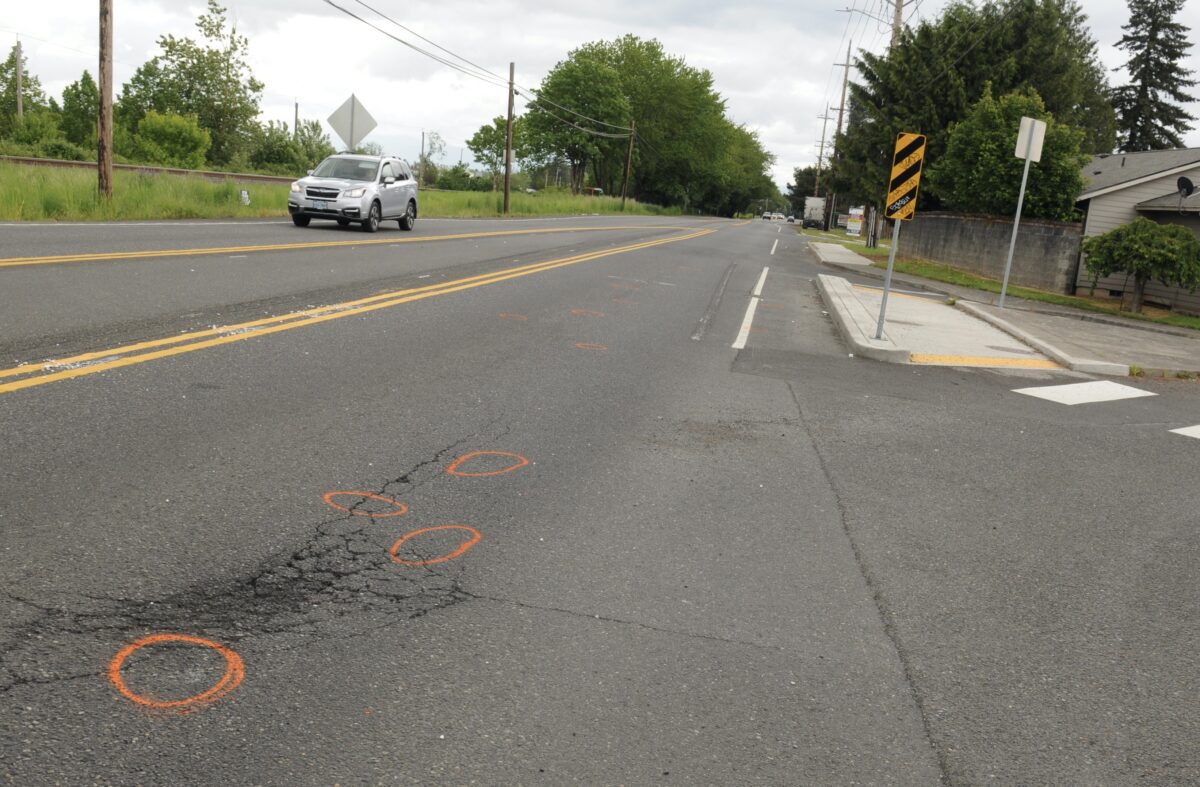 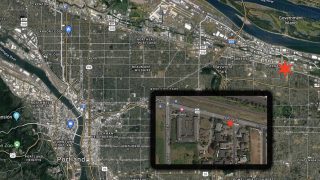 A woman was hit and killed while riding a Lime shared electric scooter just after midnight on Saturday. The Portland Police Bureau says the crash happened on Northeast Sandy Blvd at 149th at around 12:30 am.

The person who hit the scooter rider did not remain at the scene and police are asking the public to help find them. If you have any information about this crash please contact Traffic Investigations Unit Officer Chris Johnson at Chris.Johnson@portlandoregon.gov or 503-823-2213.

I visited the scene of this morning’s crash to get a better sense of the area.

(Video of the intersection by Jonathan Maus/BikePortland)

Sandy in this section is a part of US-30 Bypass, which makes it a state highway owned and managed by the Oregon Department of Transportation. On the ground it’s a relatively narrow street at the edge of a residential area in the Wilkes Neighborhood. There are two general travel lanes and one center turn lane. The shoulders are about four feet wide and are not marked as bike lanes. The speed limit is 40 mph.

On the south side of the street there are houses and businesses, on the north side there’s a heavy railroad line and industrial land-uses. The intersection with 149th is easy to miss. 149th is a small street that ends at Sandy. There’s an odd, bifurcated median at the intersection which appears to have been installed to prevent left (westbound) turns out of the residential area onto the highway.

From markings on the ground it appears the car/truck driver made contact with the scooter user at the western end of this intersection. More precise details about what happened are not yet known.

Portland launched shared electric scooters in July 2018. The Portland Bureau of Transportation manages the e-scooter program. In a report published last fall, the agency found that cycling-specific infrastructure is key to boosting scooter ridership, especially in places with high-stress streets like east Portland.

Lime has held a permit to operate in Portland since the beginning. We’ve asked the company for a response to this crash and will update the story when we hear back.

In a statement today the PPB wrote, “This incident marks the grim milestone of doubling the number of traffic related fatalities as this time last year. This is the 26th traffic fatality for 2021 in the City of Portland. This is a 100% increase over this time last year when there were 13. Despite reduced traffic numbers in 2020 due to COVID-19, it was still our highest number of traffic fatalities in 3 decades.”

According to the BikePortland Fatality Tracker — which includes a more expansive definition of traffic fatality than is used by the police or other city agencies (whose totals do not include suicides, homicides, deaths that don’t involve cars/trucks, and other criteria) — this is the 30th fatality of 2021, or an increase of 130% over this same date last year.

This morning’s fatality comes just two days after Portland’s most recent traffic death. On May 6th — just 2.5 miles west on the same section of Sandy Blvd — 25-year-old David Dentler died as a passenger in a car after it was driven recklessly and slammed into a pole. The driver now faces manslaughter charges.