A father was arrested after he smuggled his newborn baby out of Tel Aviv’s Ichilov hospital and took the child on a 20-minute ride in a crate on the back of an electric bicycle to the Sheba Medical Center in nearby Ramat Gan.

On Thursday, the day after the kidnapping, the father was sent for psychological assessment while he was being held on remand.

Prior to the kidnapping of his own child, the father had acted violently toward the medical staff at Ichilov, demanding the newborn be released to another hospital, Channel 13 news reported.

Despite the verbal abuse hurled at the medical staff, the man was not restricted from visiting his child after he sent a letter of apology. 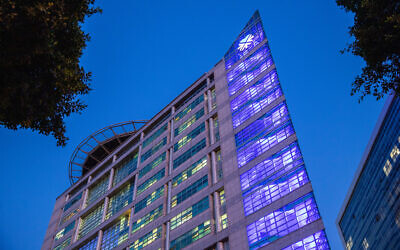 General view of the Ichilov hospital in Tel Aviv on November 10, 2020. (Yossi Aloni/Flash90)

However, on Wednesday he disconnected machines monitoring the child’s condition and took him out of the hospital against the instructions of doctors and without their knowledge.

Security camera footage released by the police showed the newborn in a crate on the back of the father’s electric bike on the busy streets of Tel Aviv.

For unclear reasons, Ichilov had denied the father’s request to transfer the child to another hospital, leading him to apparently take matters into his own hands.

The father, a resident of Bnei Brak, was arrested by police at the Sheba Medical Center. The baby is now being treated at the Ramat Gan hospital where he remains with his mother and under close guard.


I’m proud to work at The Times of Israel

I’ll tell you the truth: Life here in Israel isn’t always easy. But it’s full of beauty and meaning.

I’m proud to work at The Times of Israel alongside colleagues who pour their hearts into their work day in, day out, to capture the complexity of this extraordinary place.

I believe our reporting sets an important tone of honesty and decency that’s essential to understand what’s really happening in Israel. It takes a lot of time, commitment and hard work from our team to get this right.

Your support, through membership in The Times of Israel Community, enables us to continue our work. Would you join our Community today?


Join the Times of Israel Community

Already a member? Sign in to stop seeing this


You’re serious. We appreciate that!


We’re really pleased that you’ve read X Times of Israel articles in the past month.

That’s why we come to work every day – to provide discerning readers like you with must-read coverage of Israel and the Jewish world.

So now we have a request. Unlike other news outlets, we haven’t put up a paywall. But as the journalism we do is costly, we invite readers for whom The Times of Israel has become important to help support our work by joining The Times of Israel Community.

For as little as $6 a month you can help support our quality journalism while enjoying The Times of Israel AD-FREE, as well as accessing exclusive content available only to Times of Israel Community members.

Already a member? Sign in to stop seeing this