Bursting onto the scene at the end of 2016, few would have expected the Xiaomi M365 to become one of the world’s best-selling electric scooters. Three years later, the Xiaomi M365 Pro was released with a larger battery and more powerful motor.

The Xiaomi Pro 2 is the company’s latest offering and it takes the place of the discontinued Xiaomi M365 Pro. Although it lacks any major upgrades to really excite the hardcore e-scooter fan, the Pro 2 is still a brilliant e-scooter, especially for a first-time buyer or anyone who wants an e-scooter that packs a bigger punch.

Xiaomi Pro 2 review: What you need to know 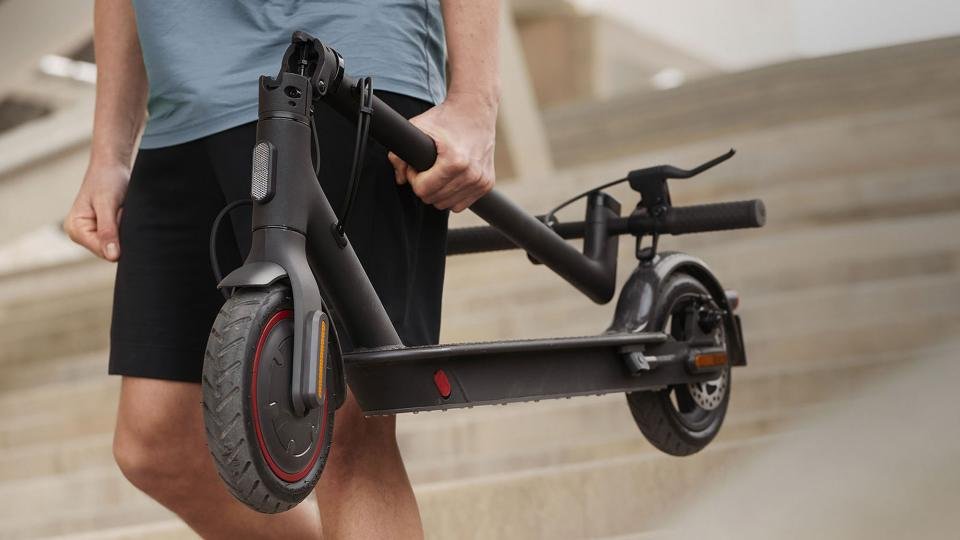 The Pro 2 does have a few upgrades up its sleeves, with bigger, brighter lights, extra reflectors, and the addition of a hard strap that connects the mudguard to the scooter at the rear axle. This serves two main purposes: first, it stops the mudguard from rattling around; second, it also prevents riders from accidentally using the mudguard as a rear brake.

Before we go any further, it is important to make it clear that e-scooters are classified as Personal Light Electric Vehicles (PLEVs) and illegal to use in the UK unless on private land or as part of an authorised rental scheme. However, as e-scooters are legal in most European countries and further afield – and with new ‘green’ policies being drawn up by the government daily, this law may undergo a change soon.

Due to these ongoing issues, e-scooters are currently not subject to UK taxes or registration, unlike some other vehicles in this category. Although there are no specific laws in place, we recommend riders wear a helmet and always follow the manufacturer’s safety guidelines.

At the time of writing, the Xiaomi Pro 2 is available for as little as £449 at Pure Electric, a saving of £151 off its recommended £600 price. With the Xiaomi 1S currently selling for £379, it’s well worth paying out the extra £70 for a much better overall e-scooter experience.

If you can stretch your budget to £499, however, the Pure Air Pro is our current favourite electric scooter because you get more motor power (350W), larger 10in pneumatic tyres for a more comfortable ride, and you can also ride it in any weather conditions, something the Xiaomi e-scooters sadly lack. The Pure Air Pro can also accommodate a heavier maximum rider weight of 120kg, compared with the Pro 2’s 100kg.

But, if riding in the rain isn’t a consideration, then at 14.2kg, the Mi Pro 2 is around 2.3kg lighter to carry and its maximum range of 28 miles is better than the Pure Air Pro’s 22.4 miles.

The Xiaomi Pro 2 is very easy to set up straight out of the box. After unfolding to its upright position, you slot the handlebar into the stem and secure with the included bolts and Allen Key. Pure Electric also includes a spare tyre and pump adapter, manual and power adapter when you buy it from them.

Once assembled, the Pro 2 doesn’t look much different from the 1S or M365 Pro. The matte black finish is stylish without being garish, with the red brake cabling of the M365 Pro on the handlebar and wheel frames now black, giving the whole thing a sleeker, more attractive look.

Reflectors replace the red strips on the sides of the wheel frame and the mudguard is stronger and covers more of the wheel than on the M365 Pro. The front light is a little bigger, too, more powerful at 2W than its predecessor at 1.1W – and brighter, now illuminating up to ten metres ahead of you.

The battery is quicker to charge than the M365 Pro, too, by a full 30 minutes. You connect the charger via a small port found under a small flap below the deck by the front wheel.

There’s a thumb throttle accelerator next to the right grip, with the brake lever attached to the left grip. In the middle of the handlebar, you’ll find the bell, which has a latch underneath that secures the stem to the rear mudguard when folded. The LED display on the steering stem displays your current speed, riding mode and how much battery capacity you have remaining.

The Xiaomi Pro 2 is easy to push around and light enough to carry around for short periods of time but, at 14.2kg, is not something you want to be carrying around for too long. When folded, it measures 1.13m long, so should fit into most car boots.

The Xiaomi Pro 2 has three riding modes that you can switch between by pressing the power button when the scooter is on. The three modes – Eco, Drive and Sport – cap your speed at different levels. Eco gives you a top speed of 10mph, Drive 12mph and Sport 15mph, although I managed to go slightly faster in each mode. 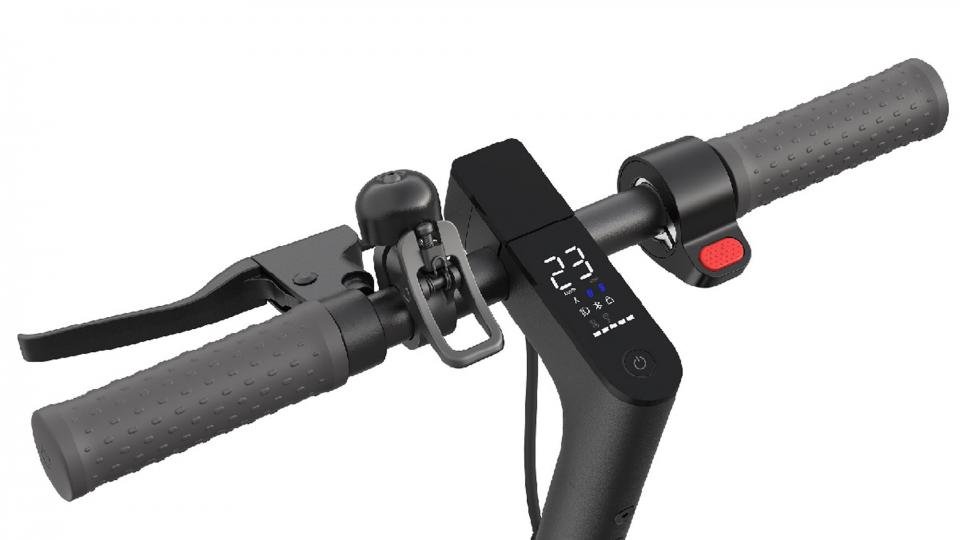 Two of the e-scooter’s stand-out features can only be enabled when you are connected to the accompanying mobile app via Bluetooth. The first enables you to lock the motor, which prevents the scooter being pushed away or turned on. It’s a handy feature but, of course, there’s nothing to stop a strong thief from carrying the scooter and walking off with it. The other is Cruise Control, which allows you to ride at the same speed without having your thumb on the throttle.

The mobile app provides some other useful information, such as current speed, distance travelled and the current battery capacity in per cent. I particularly liked the estimated range, which tells you how many miles or kilometres the battery is likely to generate before needing to be recharged.

After switching on the scooter, a quick kick-start and press of the throttle gets you moving forward easily. Acceleration is smooth and, despite the lack of suspension, the firmer pneumatic tyres do a great job of coping with bumps and even small potholes.

The three riding modes are noticeably different. Eco Mode is great if you are cruising around slowly and trying to save battery. In this mode, Xiaomi says you’ll get up to 28-miles from a single charge.

For most rides, however, you are likely to want to be in Drive or Sports mode, simply because they deliver superior acceleration, more speed and the power you need to climb hills. I found that even in Drive mode the Mi Pro 2 struggled to pull my 80kg frame up steep hills, especially on cold days. 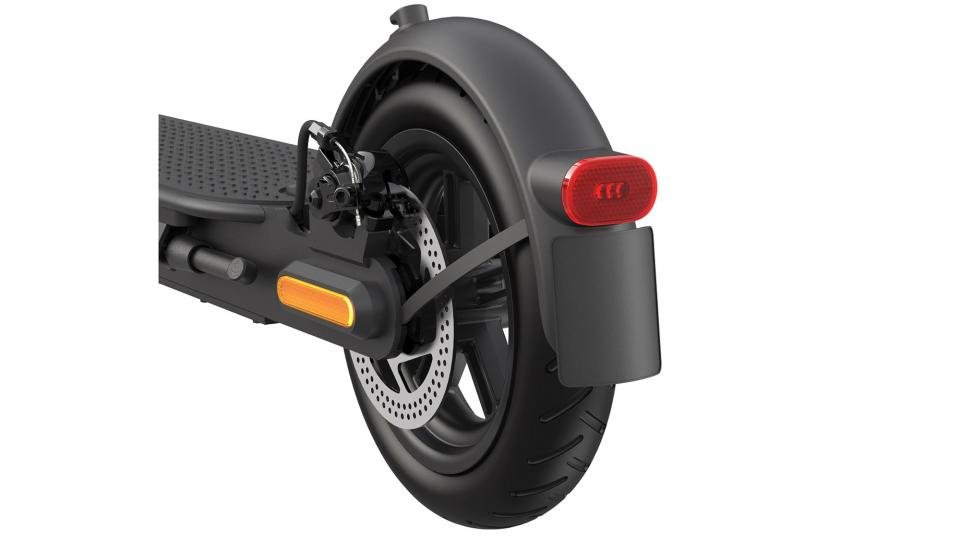 The good news is that Sports mode eats tricky inclines for breakfast, with the powerful 300W motor really kicking in when the going gets tough. On the flat, I was able to reach almost 17mph in this mode, which felt fast, but not uncomfortably so.

The Pro 2 also made the transition from road to path to grass very easily, which is something to consider if you are using it for all-terrain purposes. And battery life seems pretty good. While I didn’t ride it for long enough to test how far I could have travelled on one charge, four separate rides covering 14 miles still left me with plenty of battery life, with half my time testing in Drive Mode.

The scooter has a dual braking system – automatic electronic regenerative brakes with E-ABS and rear disc brake. The brake lever on the front grip connects to the back wheel and while riding at 10mph in Drive Mode, I was able to bring myself to a standstill in a few metres without skidding. When riding slightly faster, the stopping distance was similar and felt very safe.

Overall, the Xiaomi Mi Pro 2 is a brilliant scooter and a clear upgrade on the original M365 Pro. It’s easy to set up and ride, and the powerful 300W motor helps you navigate hills easily when in the right mode.

A range of up to 28 miles on one charge is perfect for those who are always on the move, the brakes are superb and you’ll always feel as though you are in control.

However, if you already own a M365 Pro, we wouldn’t recommend trading it in for a Pro 2 just yet. Yes, there are some nice safety additions such as reflectors and stronger lights and other extras but, on the whole, I don’t feel it’s enough to justify the upgrade of what is essentially the same e-scooter.

It’s a shame this update didn’t look at adding protection from rain or water, as I feel this is where it will always fall behind the better-equipped Pure Air Pro.