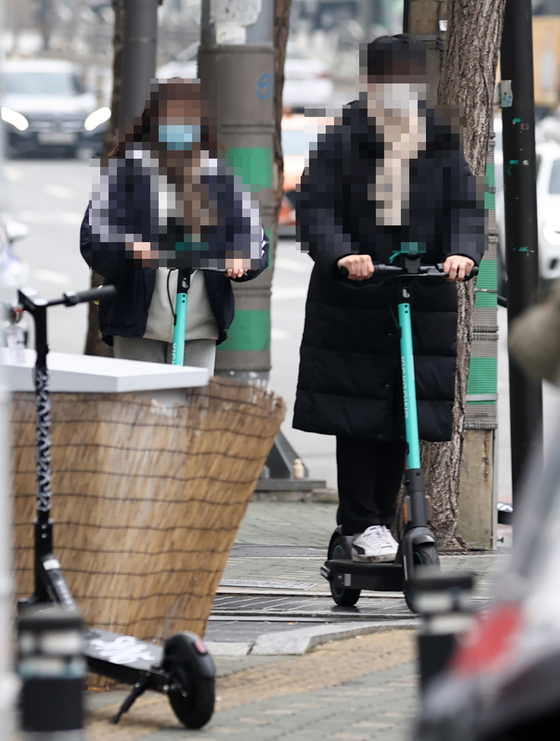 From next month, all this and more will be verboten.

According to the National Police Agency and Ministry of Land, Infrastructure and Transport on Wednesday, electric scooter riders will face tighter regulations as an amendment to the Road Traffic Act goes into effect from May 13.

The amendment strengthens rules regarding personal mobility vehicles, which include electric scooters, Segways and electric bicycles.

The amended regulations prohibit more than one person riding an electric scooter or Segway. If the rule is violated, the riders will be subject to a fine of 40,000 won ($36). No more than two will be allowed on an electric bicycle.

A 20,000 won fine will be imposed on drivers not wearing a helmet. For electric bikes, if the back seat passenger does not wear a helmet, the driver will be given a 20,000 won fine.

If caught driving an electric scooter under the influence of alcohol, a fine of 100,000 will be imposed. Personal mobility solutions are subject to the same drunk driving regulations as bicycles, but have a higher fine. A blood alcohol concentration of 0.03 percent and higher is illegal for both types of vehicles, but drunk biking has a smaller fine of 30,000 won.

Refusing the breathalyzer test will result in a fine of 130,000 won. This is also higher than the fine of 100,000 won for bicycle riders.

People riding personal mobility vehicles under the influence of prohibited drugs will be fined 100,000 won.
A motorcycle or driver’s license is required to drive electric scooters, and unlicensed drivers will also be hit with a fine of 100,000 won. This sets the legal minimum age of personal mobility usage to 16, the minimum age for acquiring a motorcycle license in Korea.

According to a Korea Transportation Safety Authority survey of 1,340 personal mobility users last year, only 8.8 percent of the respondents said they wore a helmet while riding.

Based on the same survey, fewer than half of the respondents drove personal mobility vehicles on legal lanes. Only 19.93 percent said they drove on proper roads. Adding those who rode on bike lanes, which was legalized end of last year, only pulls the number to 36.49 percent. The majority of people are still riding on sidewalks. With the new ordinance, riding personal mobility transportation on walkways attracts a 30,000 won fine.

More than 71 percent of the complaints filed with the Anti-Corruption & Civil Rights Commission between 2018 and November 2020 are directed at electric scooters and bicycles on sidewalks. Crashing into people on sidewalks is one of the 12 acts in Korea that qualifies as gross negligence under the traffic laws, and riders face criminal punishment regardless of whether they have insurance or have settled the accident. Other acts of gross negligence include riding under the influence and accidents in school zones.

Third parties may also subject to fines. If an unlicensed minor is caught driving an electric scooter, the parent or guardian will pay a 100,000 won fine.

The enforcement ordinance will be implemented sometime early next month.

“We expect that not many changes will be made to the current pre-announced regulations,” said a spokesperson for the National Police Agency.