In September 2020, a report from Pierer Mobility, the parent company of KTM and Husqvarna, revealed that there was an upcoming Husqvarna electric bike called the E-Pilen that was to go on sale in 2022. The Husqvarna E-Pilen concept has now been teased by the Swedish company and there are quite a few differences to what was originally mentioned in the Pierer Mobility report.

The design seen on this concept is similar to the current Husqvarna Vitpilen 250 and Svartpilen 250 with a unique, minimal take. However, the shape of the bodywork itself is quite different, with plenty of air visible through the chassis area. Things like the wheels, single front disc and 43mm USD fork all look similar to those on the 250’s, however, there are some red adjusters visible on the top of the fork, similar to those on the export-spec KTM 390 Adventure.

The Husqvarna E-Pilen gets a trademark round LED headlamp, however, this one sticks out a bit further to the front. The rear section is typically minimal and the numberplate and indicators on the production bike are likely to be swingarm mounted, as they are on the 250s. The fat rear tyre also looks similar to the 150-section rubber on the petrol-powered Husqvarna 250s.

The original Pierer Mobility report suggested that the bike would be available in a choice of two electric motor options – 4kW (5.4hp) and 10kW(13.5hp). However, the E-Pilen concept comes with an 8kW (10.8hp) motor, although it’s quite likely that there will be other versions available as well. 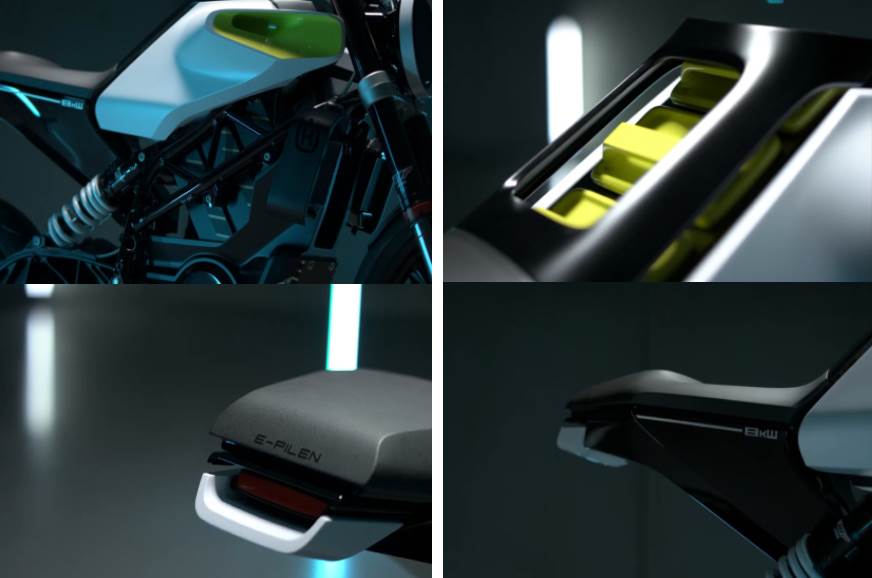 The motor is a frame mounted unit, which sends power to the rear wheel via chain-drive. When viewed head on, the E-Pilen concept appears to have a very wide radiator, with a visible radiator cap and hose in the top corner. However, another angle reveals that there are, in fact, two small radiators installed on either side. Whether these will cool both the battery pack and the motor, or just one of them remains to be confirmed.

The company hasn’t yet revealed what the battery capacity will be, but it has confirmed that the E-Pilen’s range is 100km. What we also know is that this bike will have swappable batteries and the images reveal that the battery is split into three smaller packs that can be removed from the top area of the ‘fuel tank’.

The Husqvarna E-Pilen runs a new chassis to support this electric powertrain. This trellis frame uses a side-slung monoshock, which is something also seen on the latest spy images of the next generation KTM 125 Duke, 250 Duke and 390 Duke test bikes. The E-Pilen also gets a new curved swingarm that appears to be unique to this motorcycle.

If we go by the Pierer Mobility report from late last year, the production-spec E-Pilen is to be manufactured at Bajaj’s plant in Chakan, Pune and it will go on sale in 2022. That timeline could be moved here and there based on pandemic related constraints, but its certain that there’s a range of EVs coming from KTM/Husqvarna.

We expect that the E-Pilen will be retailed out of the existing Husqvarna dealer network if and when the company decides to start selling it here. That will depend on how much this bike is going to cost, because going by the latest Bajaj Chetak e-scooter price hike, it’s likely that the E-Pilen will be more expensive than the existing Husqvarna 250s.

How much would you be willing to spend on a premium EV motorcycle with 10.8hp and a range of 100km? Let us know in the comments section below.