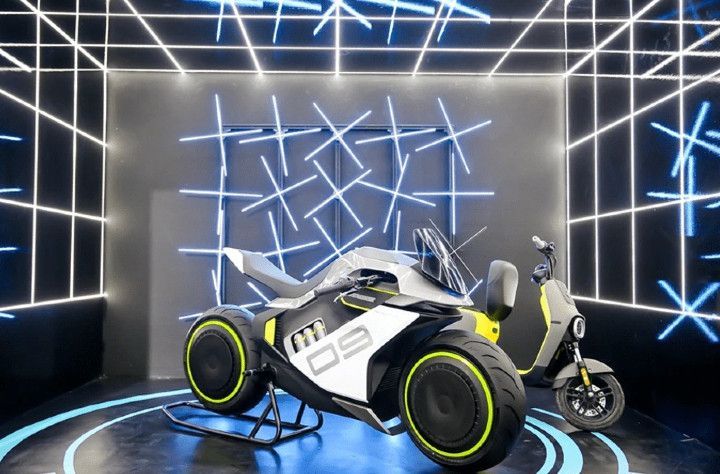 Back in October 2020, US-based Segway launched quite a funky, smart e-moped. Now, the brand has taken on the innovator’s cape with the unveiling of the Segway-Ninebot Apex H2 hydrogen-electric-hybrid concept bike. Yep, you read that right. We’re talking about a hybrid electric motorcycle using hydrogen as fuel. And before you worry about how dangerous hydrogen is, read the details below.

The brand will commence crowdfunding once 99 units of the bike have been pre-booked. The concept bike can belt out 81.5PS of power and a top speed of 150kmph. Now, to the hydrogen fuel part. In its natural form, hydrogen is volatile and susceptible to explosion if the container is ruptured. To work around it, Segway has used a solid alloy hydrogen cylinder that’s as small as a water bottle.

With this setup, Segway claims the Apex H2 can cover 1km per gram of hydrogen. The power capsule (alloy cylinder) can be swapped in no time, making refuelling easy.

The concept uses a single-sided swingarm for both front and rear wheels and sits on solid wheels shod with slicks. Once the Apex H2 hits the production stage, expect it to use more practical underpinnings like USD forks, monoshock, and alloys with more road-going rubber. All-around LED lights and a probable 7-inch TFT display can also be expected on the production version.

While details on the Segway’s alloy cell are scarce, it could be similar to the recently developed German-made magnesium hydride paste. It can not only store hydrogen power with 10 times more density than a lithium battery but is also much less volatile than regular fuel.

The Apex H2 is priced at USD 10,700 (roughly Rs 8.04 lakh). Since Segway is owned by Xiaomi-backed Ninebot, it won’t be a surprise to see a Xiaomi hydrogen-electric hybrid bike after the Apex H2 launch.

For the same money, we currently have the Triumph Trident 660, Kawasaki Z650, and Honda CB650R. So, will you spend almost Rs 8 lakh on anything but a petrol-powered bike? Let us know in the comments below.