A batch of job listings along with some Twitter whisperings suggests that scooter companies such as Lime and Superpedestrian are gearing up to operate in London and New York City — two of the last remaining frontiers of shared-scooter services.

A review of job listings, company websites and LinkedIn shows that Lime and Dott are preparing to launch in London, while Lime, Superpedestrian and maybe even Spin are getting ready for New York. While the job posts don’t provide definitive proof that these companies have been awarded these coveted permits, it does identify which companies believe they will win.

London’s Department for Transport and the NYC City Council approved their respective e-scooter pilots in the summer of 2020 as city dwellers sought socially distanced modes of travel. London’s pilot should have begun at the start of 2021, and NYC’s was originally meant to launch by March 1, but neither city has even named which companies will be awarded concessions yet. Sources familiar with the dealings say London is holding up the announcement until after the mayoral race on May 6. The NYC Department of Transportation declined to comment.

Dott, Tier and Lime for London?

There has been speculation that Dott, Lime and maybe Tier will be sharing the streets of London once the pilot takes off. Information on Dott’s and Lime’s websites, LinkedIn profiles and hiring pages show that they’re hiring for positions in the city. Sources in the industry told TechCrunch that Tier had a London-focused job posting listed on its page that has since been taken down.

Dott, which doesn’t already appear to have a footprint in the United Kingdom, is hiring a U.K.-based operations manager to “set up operations from scratch within the U.K.” They’re also hiring a public policy manager to be the “voice for the Dott U.K. market.”

On Dott’s website, a map showing service areas shows a little yellow flag over London. Clicking on the flag leads to a 404 “page not found” error page.

Lime, a mobility company that appears to be swiftly taking over the world, already has a presence in London in the form of its Jump e-bikes, which made an appearance last summer. New job postings on LinkedIn suggests they’re preparing to expand.

The company’s LinkedIn page reveals a call for a London-based general manager whose responsibilities include building and implementing “the operational infrastructure to ensure market growth in the United Kingdom.” That gig was posted a week ago and they’re actively recruiting for it on LinkedIn.

About a month ago, Lime also posted a London-based operations manager role, for which it appears to still be recruiting.

Voi might also still be in the running based on its job postings on LinkedIn. On Thursday, the company added a call for an ambassador supervisor for a six-month position in London. It seems to be an on-the-ground sort of role, and the temporary nature of it could have something to do with London’s year-long pilot. It’s also possible the company is just looking for someone in a central city to manage the other U.K. cities where Voi operates.

Bird has already been in London’s Olympic Park since the summer, and it actively lobbied for a change in London’s legislation around scooters riding on roads or pavements. This presence could explain why Bird’s operating map highlights London, but to make matters more confusing, the company is hiring an operations associate to ostensibly handle London city operations and general U.K. operations. 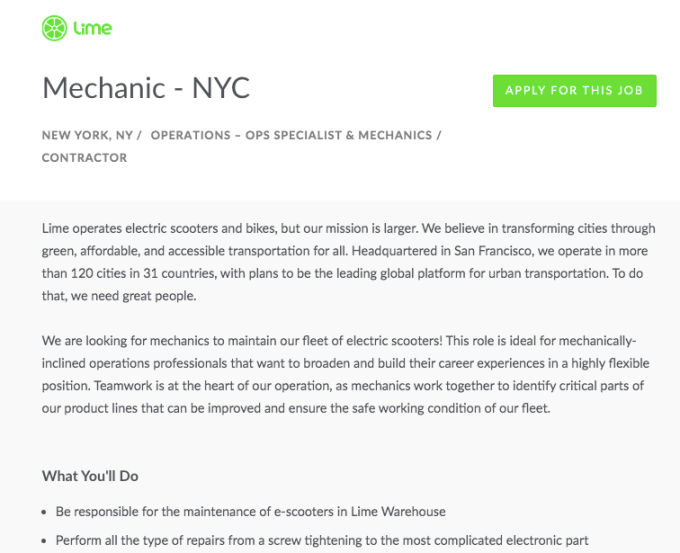 Lime is no stranger to NYC. Its e-bikes have historically had a presence in The Rockaways, Queens. Now it has two job postings up — for a mechanic and an operations specialist — that specifically mention management, maintenance, deployment and retrieval of Lime’s e-scooters.

Superpedestrian, which is based in Cambridge, Massachusetts, has four new job posts up between its website and LinkedIn. On the site, there’s a call for a chief of staff who is ideally based in NYC to support the CEO. Also listed is a general manager position; duties include “being responsible for the growth and success of our scooter share in New York and New Jersey.”

On LinkedIn, Superpedestrian has posted two positions based in NYC. The first, posted a week ago, is an operations associate that will handle things like scooter charging, safety inspections, deployment of scooters and scooter repair and assembly. The second is a scooter mechanic, posted a month ago, but to be fair the post does include the caveat: “If we are awarded the privilege of operating in NYC…”

Spin also posted (about a week ago) an operations lead based in New York. The employee hired for the position will be tasked with “Spin’s day-to-day operations, managing drivers and mechanics and building a highly efficient operations team.” It’s not precisely indicative of the Ford-owned company winning NYC, but the job does appear to be involved with on-the-ground tasks. The post also hints that the new hire would be leading the build-out and deployment of Spin’s vehicles.

With a huge presence in Europe but absolutely none in the United States as of yet, Voi has been hoping NYC would be its entry into the country. The company hasn’t posted any NYC-specific job ads, but its job board features a locations dropdown menu that includes NYC.

Finally, Bird is adding to the mess of guesses with two LinkedIn job posts based in New York. The general manager position, posted four weeks ago but still actively recruiting, appears to require someone to be pretty locally involved. The operations associate role, posted on Wednesday, is a bit more vague about whether the new hire would be on the ground in NYC or not.