Kwang Yang Motor Co (光陽工業), which has been selling gasoline-powered scooters for more than half a century under the name KYMCO, is reshaping its brand image by adopting a second brand name, Ionex, for its electric scooter business as it moves to challenge market leader Gogoro Inc (睿能創意). 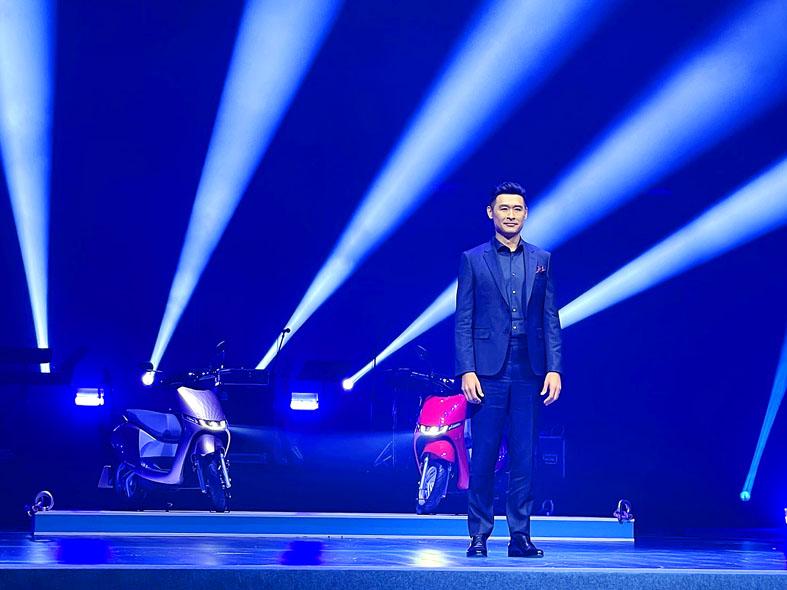 Prior to this year, Kwang Yang’s electric scooters were sold at its existing sales outlets, alongside its gasoline-powered scooters, since their debut three years ago.

“We have to compete with a strong rival in the home market. Kwang Yang has long been the nation’s biggest maker of gasoline-powered scooters. That brand image is deeply rooted in local consumers’ mind,” Kwang Yang chairman Allen Ko (柯勝峰) said in an interview with a small group of reporters on Wednesday last week.

Gogoro holds 77 percent of the domestic electric scooter market, while Kwang Yang only has 4 percent, according to the Industrial Development Bureau’s tallies.

“To catch the consumer’s eye, we have to adopt a new brand and forgo KYMCO,” Ko said. “You will not see KYMCO in our electric scooter commercials anymore.”

The company has replaced the KYMCO label with Ionex for its new electric scooters, he said.

Kwang Yang plans to open 11 dedicated stores for its electric scooters, called Ionex stores, within one month and aims to more than quadruple that to 50 by the end of this year.

However, Kwang Yang is not ready for a spin-off at this time, Ko said.

Electric scooters and gasoline-powered scooters are developed and manufactured in the same factories to maintain cost-efficiency, Ko said.

The Ionex brand will only be adopted for the local brand, as its KYMCO brand is better known in global markets, Ko said.

Battery supply is as important, if Kwang Yang wants to become a key player, Ko said.

This was Kwang Yang’s weakness, as the company had previously rolled out scooters that riders could only charge at home or at charging stations, he said.

Kwang Yang plans to build 1,500 battery swap stations by the end of this year and to increase the number to 4,000 by the end of next year.

To speed up deployment, Kwang Yang is considering signing up electric scooter riders who have space that can be turned into a small-scale battery swap station, he said.

He attributed a short supply of fully charged batteries to a slump in domestic electric scooter sales last year, in addition to adjustments in purchase subsidies from the government.

To ensure sufficient battery supply, Kwang Yang said it is taking a different approach from its major rival.

The company will suspend sales of electric scooters if its pace of battery swap deployment cannot keep up with the pace of its sales growth, Ko said.

It also offers riders two types of batteries — for charging or swapping.

Gogoro riders can only swap batteries with fully-charged ones at battery swap stations, which requires an intensive network.

Comments will be moderated. Keep comments relevant to the article. Remarks containing abusive and obscene language, personal attacks of any kind or promotion will be removed and the user banned. Final decision will be at the discretion of the Taipei Times.