Specialized just released one of its most interesting electric bikes to date, the Como SL. The SL stands for “Super Light,” and Specialized is marketing it as an everyday commuter, perfect for zipping over to a friend’s house, picking up some groceries, or, if you really need to, carrying up a few flights of stairs. There’s even a hand grip built into the frame to help lift the bike when needed.

The Como SL is a slimmed-down version of Specialized’s Turbo Como, which is the company’s entry-level electric bike for commuters. The company is doubling down on a lot of the elements that made the Turbo Como so inviting to riders, while also adding a whole host of additional features — including aluminum fenders, a rear rack, and a front-mounted basket — without adding unnecessary pounds.

For the last week and a half, I’ve had the pleasure of riding the Como SL all over my neighborhood to see how it measures up — not only to Specialized’s other highly capable, extremely powerful (and at times very pricy) e-bikes, but also to the other lightweight commuter e-bikes that have been flooding the market. 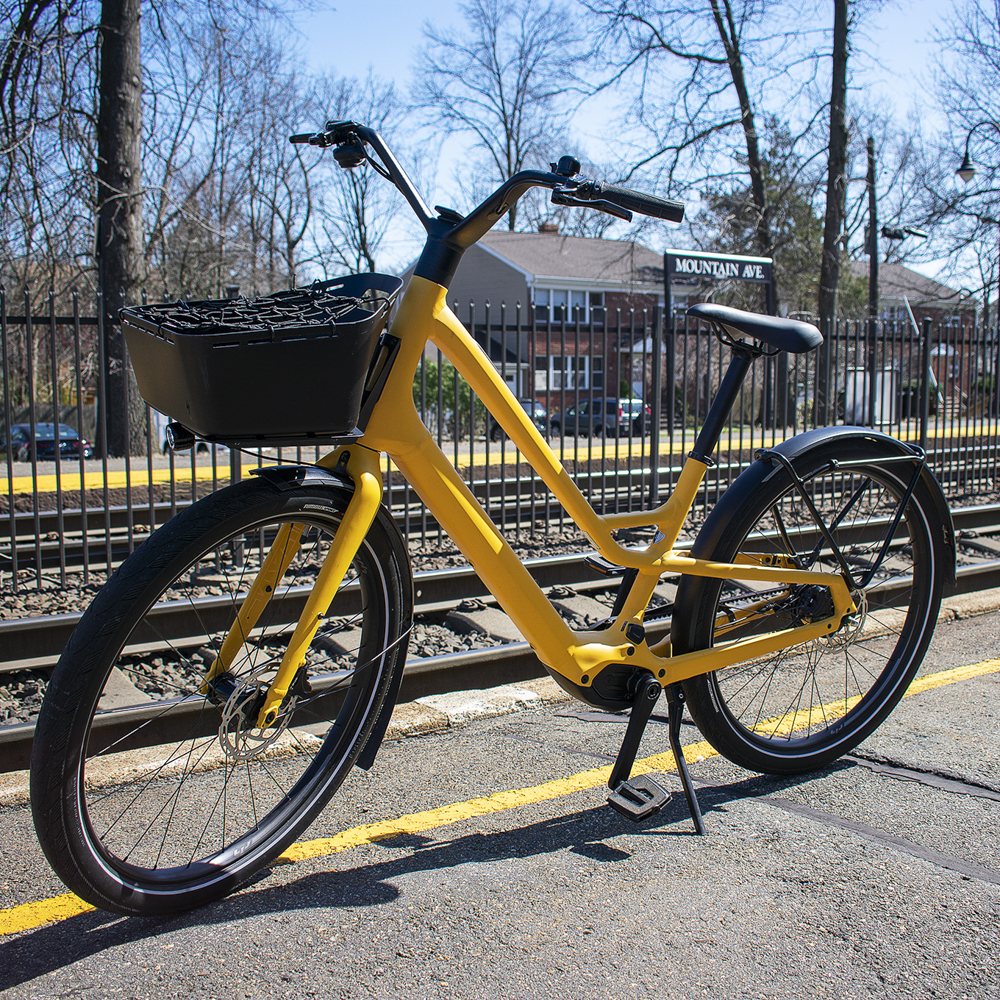 I tackled steep hills, busy county roads without bike lanes, and even a languid ride through the park. While the Como SL is not the most powerful e-bike I’ve ever ridden, it is among the smoothest and easiest to handle.

Maybe it was the warming spring weather or the way the Como SL’s yellow paint job reflected the daffodils just now emerging from the ground, but I found this bike to be an absolute delight to ride. I did have some issues with the UX of the digital display, and the gearing left a little bit to be desired. But overall, the skill and craftsmanship Specialized put into the Como SL really shone through, and I think this will be a worthy addition to the company’s growing lineup of e-bikes.

Specialized may be based in California, but its design team is headquartered in a nondescript brick building in Cham, Switzerland. That’s where the company designs its Turbo-branded e-bikes like the Levo, Creo, Vado, and Como, as well as their Super Light variants.

To make the Como SL worthy of that suffix, the company started out by fully integrating the battery into the frame of the bike. Many direct-to-consumer e-bike brands have unsightly batteries perched on the downtube, while other companies have tried to have it both ways by integrating it into the frame while also having it be removable. Specialized decided to make its battery both fully integrated and non-removable, placing the Como SL in the same category as companies like VanMoof, Ampler, and Gogoro.

“By integrating [the battery] we were able to make a really lightweight aluminum frame,” Dominik Geyer, head of business for Specialized’s Turbo brand, who is based in the company’s Swiss office, told me. “We have a system that is super efficient, that needs less battery cells [which] makes it lighter weight.”

“We have a system that is super efficient, that needs less battery cells [which] makes it lighter weight.”

Specialized says the Como SL’s 320Wh battery should be good for 62 miles (100 kilometers) of range, depending on the terrain and power setting. I found that while riding in the middle “Sport” setting, I burned through nearly 100 percent of the battery in less than 35 miles. That’s pretty standard for an e-bike battery, but Specialized does offer an optional Range Extender for $449.99, which the company says adds about 31 miles (55 km) of range.

Specialized says the battery can recharge from 3 percent to 100 percent in approximately 2 hours and 35 minutes. There’s a port at the base of the downtube where you can plug in the 48V charger.

Another driving factor was simplicity, Geyer said. Specialized wanted a bike that was easy to ride and even easier to maintain. The Gates carbon belt drive and internal geared hub motor speak to this desire, as well as the simplicity of the cockpit controls. “The bike simply needs to be a trusted partner in your daily life to get around,” Geyer added.

Still, the Como SL isn’t exactly a featherweight. It essentially weighs the same as the Turbo Como — between 47 and 48.5 pounds, depending on the frame size — despite all those new accessories. That means Specialized has found other, unique ways to shave off some of that bulk without compromising on what makes it so much fun to ride.

One of those is the SL motor, which tips the scale at 4.3 pounds (1.95 kg). Compare that to the Turbo Como’s motor, which weighs about 7.5 pounds (3.4 kg), and you can see how much work Specialized put into shrinking down the componentry in this bike. The motor is developed jointly by Specialized and Brose, a German company that also makes e-bike motors for Harley-Davidson and others.

You’d think that by reducing the size of its motor that you’d be dealing with a less powerful bike — and you’d be right, to some extent. Specialized says the Como SL’s rear-hub motor has 240W of peak and continuous power as well as 35Nm of torque. That’s slightly less than the Turbo Como, which has a mid-drive motor rated for 250W of nominal power and 415W of peak and 50Nm of torque. Specialized says the Turbo Como offers riders four times their natural power input while pedaling, while the Como SL only delivers twice as much power.

That becomes readily apparent when powering up a steep hill. I found myself having to exert a lot more force than I usually do when riding an e-bike, which is not necessarily a bad thing. I appreciate an e-bike that makes you work a little bit harder to get you to where you’re going, though I realize I might be in the minority with that opinion, especially if your goal is to arrive at your office job sweat-free.

Overall, the look of the bike is very clean and polished, with all the wires integrated into the bike’s frame. That’s a stark contrast to most DTC e-bikes, which typically come with a rat’s nest of wires tangled around the handlebars. After all, there are clear advantages to going with an e-bike from a legacy bike company.

Let’s talk about the digital display because this was my least favorite part about the Como SL. The LCD display is small by e-bike standards, 2.5 x 2 inches, or about the size of a pack of gum. There are only two buttons, left and right, which can be used to scroll through a half-dozen different screens showing speed, odometer, calories burned, distance traveled, and a timer. It’s a clean design, but I found it to be over-simplified.

The real controls are routed through Specialized’s smartphone app, Mission Control, which is paired with the bike via Bluetooth. I’ll be completely honest: I am not a fan of app-based controls for e-bikes. It was one of my few beefs with Gogoro’s Eeyo 1S, and the same goes for the Como SL. I understand that by offloading certain controls to an app, manufacturers can offer nicer graphics and more functionality while saving on the costs associated with the on-bike display. And you don’t need the app to actually turn the bike on; the button for that is placed on a nice rubber pad in the downtube, along with a series of blue light bars that indicate battery strength.

But when I’m riding an e-bike, I want to be able to toggle between power settings without fumbling in my pocket for my phone. The Como SL doesn’t come with a standard phone mount. Although one could certainly be purchased separately, I’d struggle to find a place to mount it. The sloping handlebars would likely direct the phone’s display off to the side. And the LCD screen is mounted in the center, which would be another obvious place for a mount.

The good part about the app is the level of fine-tuning it allows. You can customize the power settings to fit your riding style. The “Smart Control” feature automatically tailors the electronic assist in real time based on the information you input, such as how far you plan on riding. That worked well when I took the Como SL on a 10-mile ride with a lot of steep hills. The gearing on this bike is also among the most seamless I’ve ever experienced.

My last issue with the Como SL is the price. Specialized’s build quality is among the best in the industry, so you won’t be surprised to learn that this bike is a little expensive. There are two versions of the Como SL: the 4.0, which retails for $3,299.99, and the 5.0, which sells for $3,699.99.

The difference between the two is the number of gears in the Shimano drivetrain. The Como SL 4.0 features the 5-speed Nexus system, while the 5.0 comes with the 8-speed Alfine. There are also different paint jobs that come with both. The 4.0 comes in three colors: “cast umber,” “dove grey,” and “raspberry.” The 5.0, which is the one I tested, comes in “brassy yellow,” “brushed silver,” and “smoke.”

Specialized claims both bikes can reach a top speed of 28mph — which technically puts them in the speed pedelec category. However, on a flat surface and in the highest “Turbo” power setting, I was only able to get up to 24–25 mph. Not a huge deal, but it still left me wondering what I was missing.

Overall, the Como SL is a super fun, super lightweight, very approachable electric bike. The shape and contours of the frame are inviting, the front basket and rear rack allow for a decent amount of storage, and the drivetrain is extremely simple to use. Although I would have preferred less reliance on the app for basic functionality, I’m also not a Luddite, and I realize this is a direction some e-bikes appear to be heading. Fortunately, it’s not ubiquitous, so there’s still time to figure this out.

The price may deter those looking for something inexpensive. But for fans of Specialized — or for anyone who’s interested in an e-bike from a trusted company with decades of experience in the building, selling, and maintenance of bikes, both traditional and electric, — the Como SL should be the perfect fit.