Nobody else seems to be bothered, so here goes. Why have we allowed horrible, stupid electric scooters to infest our streets?

Will anyone put a stop to it before it is irreversible? In this idiotic decision all kinds of other follies are bound up.

Near where I work we still have quite a few people who claim to be police, swaggering about with sub-machine guns and wearing baseball caps. But it is beneath them to enforce the ‘petty’ laws against people riding motorised machines at high speed along the pavement. 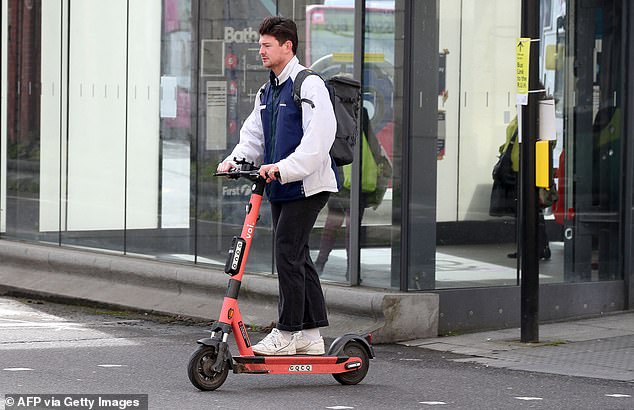 Nobody else seems to be bothered, so here goes. Why have we allowed horrible, stupid electric scooters to infest our streets? Will anyone put a stop to it before it is irreversible? In this idiotic decision all kinds of other follies are bound up. A man is seen on an e-scooter in Bath

Elsewhere the police seem to have forgotten how to walk and can only be observed in cars or helicopters, which help them to fail to notice almost everything that is going on. So I suppose it is a bit much to expect them to pay any attention to the lawless invasion of pavements, paths and parks by these bone-breaking nuisances.

Another thing driving the spread of electric scooters (apart from brilliant public relations and product placement in TV dramas) is green dogma. This claims that because they are ‘less polluting than cars’, they are a good thing.

This is such obvious bilge that only a fanatic could believe it, but the schools and universities teach green fanaticism these days – and it is one of the few things they seem to be able to get across successfully.

Just think about it. E-scooters have heavy batteries, made with metals grubbed out of the African earth in dangerous old mines by small boys doing what is effectively slave labour. I have seen such a mine, during an unpleasant visit to the Congo a few years ago, and it would not comfort me much to know I was keeping it in business.

Next, batteries have to be charged. The electricity to do this is made in power stations – often in French nuclear power stations which green fanatics greatly disapprove of – or generated by burning coal, gas, oil or diesel. So they only seem clean. The pollution they cause is done elsewhere. 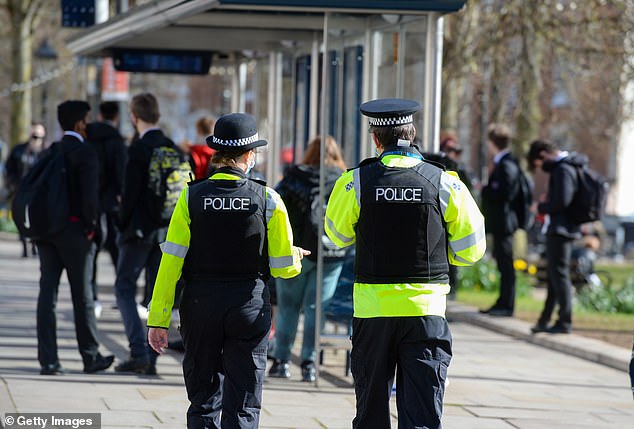 Near where I work we still have quite a few people who claim to be police, swaggering about with sub-machine guns and wearing baseball caps. But it is beneath them to enforce the ‘petty’ laws against people riding motorised machines at high speed along the pavement

And when I see the fashionable people who stand smugly on these machines, their faces glowing with self-satisfaction, often dressed melodramatically in black, I wonder what is wrong with their legs.

I do not think e-scooters are actually keeping people out of cars, as is claimed. Judging by the selfish way they drive, I suspect many who ride them have either lost their licences, or cannot pass a driving test. And the journeys they do could mainly be done on foot or a bicycle. But to do either of these things you have to make a bit of an effort, rather than twisting a throttle.

For nearly 50 years I have supported campaigns to make our cities friendlier to pedestrians and bicycles, because cycling and walking really do not cause pollution or waste energy – and because they are so marvellously good for the national health, mental and physical. But the places where cyclists and walkers were once unmolested are now full of high-powered machines, ridden by people who cannot be bothered to walk or pedal.

And when I say high-powered, I mean it. A few cunning tweaks, and their speed controls can be bypassed, making them even more dangerous. Their riders also risk them on busy roads, swerving suicidally through traffic.

Poor Paris is already badly bruised by allowing these menaces. Back in 2019, before lockdown, a professional musician at the Paris Opera, pianist Isabelle Albertin, then 60, had her wrist smashed by a speeding scooter rider.

‘I’m afraid I will never be able to play like I did before. The recovery is going to be long and difficult,’ she said.

‘It’s chaos on the streets of Paris. As a pedestrian you are in constant danger, under attack from speeding scooters.’

That year, three people were killed in scooter accidents in the French capital. I wonder how many have suffered the same fate here. And how many will.

In this country we face constant e-scooter ‘experiments’ in various cities, which are really just PR lobbying for legalisation. They will become so normal that nobody will object. I don’t suppose anyone will pay any attention to this now, but I wish you would.

Because in a few years, when the hospitals and cemeteries are full of the victims of this stupid mistake, I will be left to do what I do so often, and say yet again ‘I told you so’.

Deny me that small pleasure. Protest, and demand that the law is enforced where you live.

If only our police were on patrol…

I want to like Line Of Duty. Its author is clever, it has some great actors and it has been thrilling in the past. But I wonder how much more drama can be squeezed from this sterile version of policing.

Everyone is either sitting in an office staring at a screen, or dressing up as the SAS and smashing doors down.

I have an idea for a tense, exciting new police series, in which a young officer defies her bosses and insists on going into the town on lone foot patrol, all her working day.

Why do we ignore stench of tyranny?

It may seem funny that the Chinese government announced sanctions against various British politicians and others who have criticised its cruel, bigoted behaviour towards the Uighurs. What can they really do? The targets will all wear these attacks as badges of honour.

And yet, I am not so sure. I think the time will come when this horrible despotism can reach directly into our society, and harm its enemies here. Chinese power spreads constantly in our increasingly unfree country. We give in to Peking all the time. One early example of this was when the Chinese state successfully bullied the British media into calling their capital ‘Beijing’ – which is exactly why I never do so. French, German and Italian journalists don’t do this. It is quite illogical, and has no other purpose than to show who is boss. Encouraged by that kowtow, the Chinese kept pushing.

When Chinese leaders visit Britain, our police meekly and obediently keep protesters out of sight, while allowing Peking-sponsored rent-a-mobs to parade unmolested.

On the most recent visit by President Xi, in 2015, a lone protester, Shao Jiang, stood by the path of the Chinese leader’s procession. In each hand he held up a small A4-sized placard (destroying excuses that he might have been hiding a weapon or a bomb). One said: ‘End autocracy.’

The other read: ‘Democracy now.’ Suddenly he was barged by three British police officers who pushed him backwards at the double, as he feebly protested.

He was then held overnight, for no good reason, and his home raided and searched, as it would have been in China.

No wonder the Chinese have felt free to trample and spit on their own promises to maintain freedom in Hong Kong. They can easily see we are so anxious for their business that we will put up with any humiliation to get it.

China laughs at our pretence of being a great power. Without guts among our governors, our costly weapons are as pointless as bathtub toys. Of course we have to trade with horrible countries, and hold our noses while we do so.

But our servility to China goes way beyond this. Far from holding our noses, we simper as we pretend that the stench of tyranny is a sweet smell, in the hope of favours.