Bike business is booming in Winnipeg as the pandemic pushes more people outside to find fun ways to keep fit.

Customers waiting from last season have already bought up most of this summer’s inventory, he said, and hundreds more are on a wait list. Parts and bikes that he’d expected to arrive are months late, much to his own frustration and that of stir-crazy cyclists.

“We were told they’d be here in October but they still aren’t here,” McAndrew said. “Certain brands, we’re having a lot of trouble getting bikes in. A lot of it comes down to the manufacturing of the bikes. It’s not that they’re sitting in a warehouse. It’s that parts are in short supply.”

The overwhelming demand worldwide for parts such as derailers is causing shipping delays and supply chain disruption, he said. As a result, he is working until 11 p.m. each night to build.

“Last summer we ran out and we’re expecting that to happen again this year,” he said.

Shop owners say people have more will and money to buy a bike during the pandemic, and selection extends far beyond road and mountain bikes. BMX bikes, unicycles, gravel bikes, electric bikes and scooters are all the rage at stores across the city.

“There’s a lot more options than what I remember as a kid.… Used to be here’s your bike go ride it,” said Tobin Douglas, who was shopping for commuter bikes with his partner on Tuesday.

“There’s not that much stock in the city.”

Business isn’t as backed up at Woodcock Cycle Works, as they sell multiple brands from various suppliers. Owner Tim Woodcock has hired extra staff to handle repairs, bike building and one-on-one customer support to accommodate social distancing within the store. Soon, he said they’ll move all bike repairs to a new warehouse to free up space.

“Bike sales haven’t stopped all winter. We’ve [had] bikes coming in since last winter and anything coming in seems to be going out as soon as we get it,” said Woodcock.

His advice to anyone looking to buy a bike is to do the research and order as soon as possible, because some bikes and parts will take between one and three months to arrive. While he urges people to order online, McAndrew wants his customers to do the research, then book an appointment to come in person before ordering the bike.

John Hudson was shopping for gravel bikes on Tuesday, but said he came too late.

“The lowest-price gravel bikes are now in the $2,000 range and a lot of stuff is sold out. I’m just buying the last chariot- for-the-kid-behind-the-bike thing and it’s their last one,” he said.

But he’s glad to see such a healthy community, even if they’re not riding the latest craze.

“People outside playing, cross-country skiing, snowshoeing, I’ve never seen Winnipeg as active as it is right now. People walking by and saying, ‘Hi, how are you doing?’ out on the street. It’s really changed the attitude. It’s more like Sweden now. Oh it’s cold… so what? Get out there.” 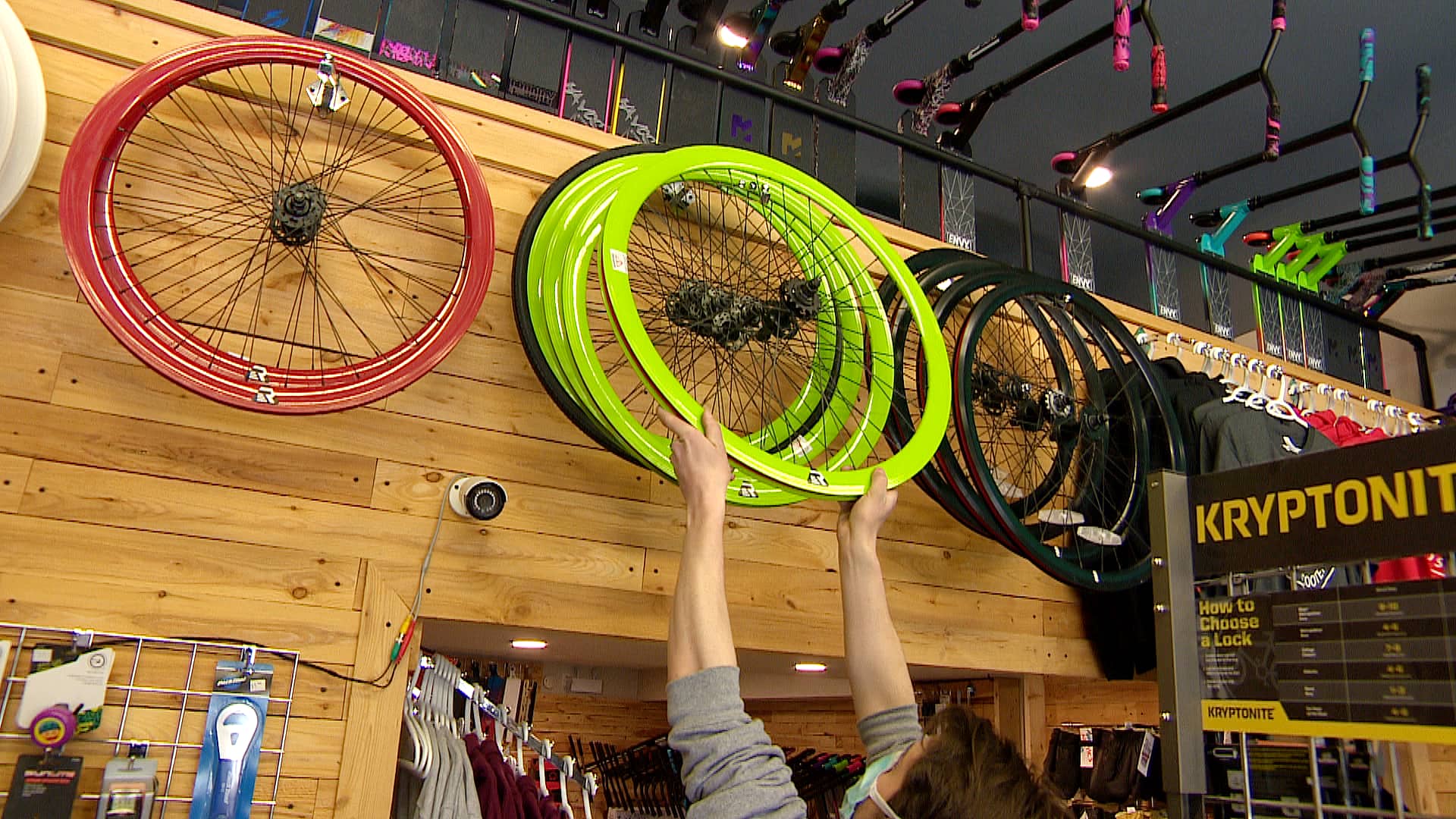 It’s the bright side of the pandemic, people in Winnipeg are getting outside and bike businesses are pedalling hard to keep up with ‘crazy’ boom. 2:14