We all know Ola as a ridesharing, food delivery and cab service provider. Now, Ola is entering an all-new segment of electric scooters. The test mule of the electric scooter was first spotted back in January. Ola made this possible by acquiring a Netherland-based electric scooter company known as Etergo. The new manufacturer has signed a Rs 2,400 crore MoU with the Tamil Nadu government to set-up the plant. The plant could manufacture 2 million units annually. 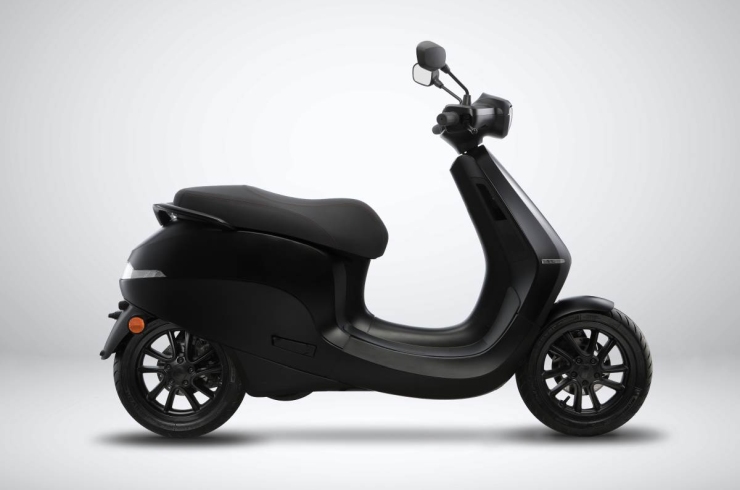 From the first looks, stealthy with all matte black paint job.  The design is heavily based on the Etergo Appscooter. Acquiring another electric vehicle company makes sense for Ola as they did not have to start from scratch and they already had a product that they needed to modify for the Indian conditions. At the front, you get a twin-pod LED headlamp with a LED ring around it that should work as an LED Daytime Running Lamp. There is two outside rearview mirrors placed and the scooter looks conventional and funky at the same time. The front panel is flat and gets a two-tone paint job. The sides are painted a subtle grey while the middle part gets a matte black paint job. The OLA badging is also done in Black. There are two thin LED strips placed below which should work as turn indicators.

The side profile of the scooter is also relatively simple with all matte black paint job, a flat seat that should be comfortable for the rider. There is a simple grab handle placed below the seat, but it cannot be used as a pillion backrest. From the picture, we can see that Ola is using blacked-out 5-spoke alloy wheels. There is also a slim LED tail lamp placed and the rear fender stretches quite below with orange reflectors on either side.

Ola’s electric scooter is supposed to be based on the Etergo AppScooter so we expect the mechanicals and other bits and pieces would also be the same. Etergo uses high energy density batteries that are swappable. These batteries deliver a claimed range of 240 km but the range depends on how much battery modules are used. The manufacturer claims a 0 to 40 kmph time of just 3.9 seconds. The scooter should be able to hit a top speed of 100 kmph. The under seat storage is rated at 50-litres and it does get a digital TFT screen instead of an analogue instrument cluster. However, all of this information might be changed when the scooter is modified for the Indian environment. Ola Electric scooter will be competing against the Ather 450X, the Bajaj Chetak and the TVS iQube. The scooter will be made in India at the Tamil Nadu factory. It is a massive 500-acre site which is located in Krishnagiri district of Tamil Nadu. The factory is not ready but should be complete by 2022. The manufacturing facility will have different spaces for batteries, general assembly, welding, finished goods, paintshop, motor and it will even have its own test track to test the scooters.