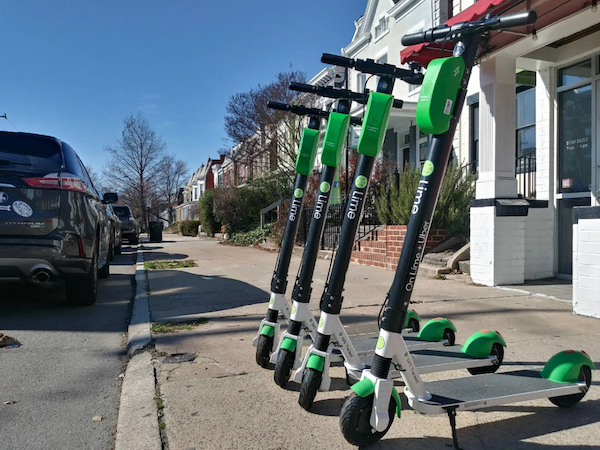 A quartet of Lime electric scooters in the Fan. Lime recently launched in Richmond with hundreds of scooters, which can be rented and ridden on demand via the company’s mobile app. (Jack Jacobs photo)

Two years after souring on a Richmond launch, electric scooter giant Lime is the latest competitor to bring a fleet to the city.

The San Francisco-based company, which offers on-demand, dockless scooters, on Sunday deposited approximately 300 of the vehicles on local streets, with plans to increase its local fleet to 500.

It costs $1 to unlock the scooter using Lime’s app, and then 32 cents per minute.

Lime’s launch is a long time coming. Several years ago, the company made moves toward an entry to the Richmond market but ultimately killed the project in 2019 due to the city’s regulation of the devices.

Now, the company says it sees an opportunity to meet transportation needs amid the coronavirus pandemic, when some people may be looking for a more private alternative to the riding the bus.

“There are a lot of reasons why micro-mobility works or doesn’t work in a city. As cities recover from COVID-19, we can clearly see the need for a socially distant form of transportation to get people moving again,” said Robert Gardner, the company’s mid-Atlantic director of government relations, in an email.

At least for now, Lime doesn’t have plans to reinforce its scooter fleet with the electric bikes or mopeds the company plans to operate in other cities.

“Lime does not have plans currently to deploy our Jump e-bikes in Richmond just yet. We will work with the city to make sure we get the rollout of our e-scooters done and then we will evaluate whether the e-bikes are a good fit for Richmond,” Gardner said.

Richmond already has its own city-run bike share program, which is working toward an expansion.

Lime operates in more than 140 cities in the United States and internationally. In Virginia, the company also operates in Norfolk and Roanoke, according to its website. Lime acquired Uber’s electric bike and scooter operation, Jump, last year.

Lime’s arrival comes just weeks after Helbiz, a New York-based e-scooter company, began deploying its devices. Other competitors such as Bolt Mobility and Bird also have a local presence.