Electric vehicles are now becoming more common on our roads. There are number of new and existing manufacturers who have their presence in this segment. Several new manufacturers have launched electric two wheelers in the market. Some of the most recognizable names are Okinawa, Ather, TVS, Bajaj and many more. Just like electric cars, electric scooters or two-wheelers are also a bit expensive than regular two-wheelers. We have seen several DIY videos on the internet in the past. Here we have a video that shows how you can actually convert a normal petrol powered motorcycle into a fully electric bike.

The video has been uploaded by Creative Etc. on their YouTube channel. The video starts by showing the bike which will be converted into an all-electric motorcycle. The old generation Pulsar 180 is brought into the garage and the engine, exhaust and the rear wheel is separated. The swingarm on the motorcycle is also removed from the frame and fabricated to fit the new wheel. The normal alloy wheel on the motorcycle was removed and in place of that, there is a new wheel which comes with an electric motor in the hub.

Also read: Vlogger trying to be Ghost Rider on a Bajaj Pulsar 220 is absolute STUPIDITY (Video)

As the motor is already there on the hub, it will not have a belt or chain drive system. The power from the batteries will be directly given to the hub motor and it will spin the rear wheel. The vlogger even installed a disc brake to the rear tyres. After completing this, he moves towards the battery. Like other videos that we have seen in the past, he did not buy a lithium ion battery. What he did was, he bought over 200 lithium-ion cells and connected them to form a new battery pack. The wiring and connections were all shown in the video. Before installing the battery, he even tests the battery pack. 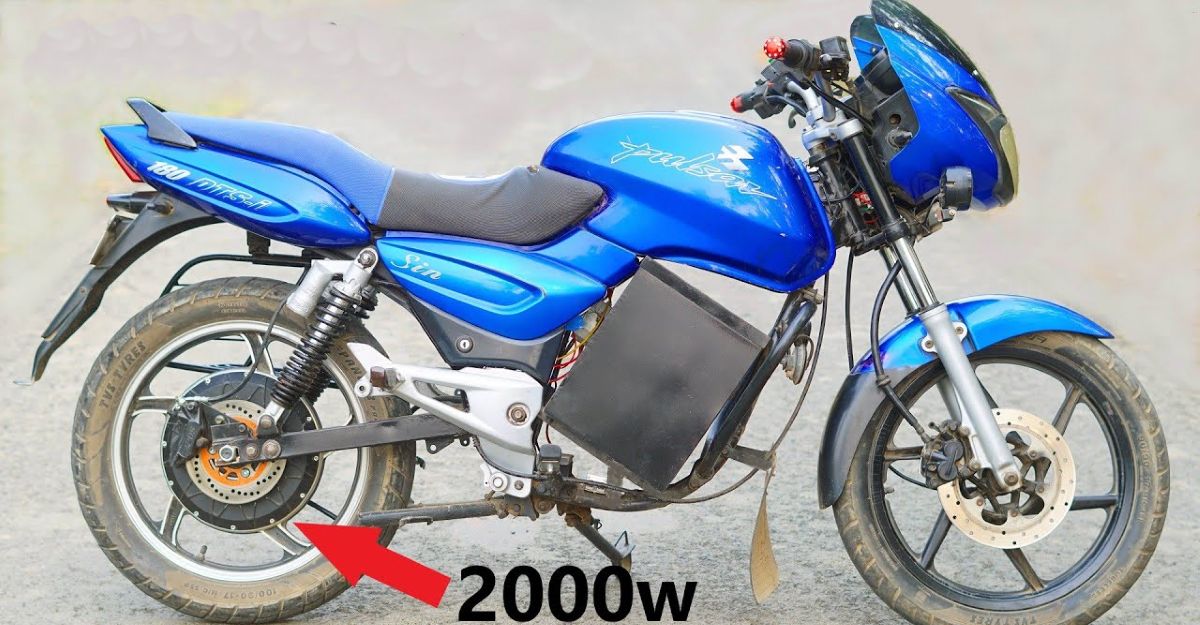 Once the battery pack was ready, he fabricated a metal box where he can safely keep the battery pack. In order to eliminate any sort of movement or to avoid rubbing of batteries against metal sheets, the vlogger inserts layers of cushioning to the box. After these thing were in place, the vlogger makes some changes to the frame. The battery pack is placed where the engine used to be before. There is a trip meter or an emergency cut off switch placed on the bike to protect the batteries and vehicle in case of a short circuit.

The wires are all connected to the electric motor inside the hub. As this is now an electric motorcycle, there is no clutch or gear lever on this bike anymore. It now gets a new accelerator with horn and brake lever. There is even an ON-OFF switch on the handlebar. The speedometer now shows the speed and in place of tachometer, there is a digital indicator that shows battery usage. The finished product looks pretty neat. According to the vlogger, this motorcycle can do a maximum speed of 70 kmph and the maximum riding range on fully charged batteries is 110 kms.