Retailers say Baby Boomers are latching on to the e-bike trend, buying bikes to take on caravanning holidays or simply to prolong their recreational riding hobbies.

Fuelled by the coronavirus pandemic, Australia recorded its biggest year of bike sales in 2020, with the import of 50,000 e-bikes in the 2019/20 financial year also a record.

But the growth in e-bike sales has far outstripped that of traditional models as Australia plays catch up to more mature e-bike markets in Asia and Europe.

Electric Bikes Superstore South Australia owner Scott Pearce bought the Magill Road shop in late 2019 and initially took the existing business over with a view to it being a one-man operation.

He now has five full-time staff and is looking to open a second shop in the next three months.

The Kensington Park shop sells about 80 different electric bikes across more than a dozen brands and also began selling electric scooters and motorbikes in September.

Bike categories include electric mountain bikes, folding e-bikes and commuter e-bikes with bikes ranging in price from about $1500 to more than $5000 and typical battery ranges of 50 – 100km.

He said the increase in demand in the past 12 months had been accentuated by a reduction in supply due to coronavirus impacts on supply chains and an overall spike in global industry demand that had led to delays in shipping bikes to Australia.

“In saying that, I’m a pretty proactive individual and I’ve probably got 60 brand new bikes in boxes that I could sell tomorrow but it’s definitely not the old days where you would order a bike from a supplier and you’d have it in a few days,” Pearce said.

“I’ve got people prepared to wait four months for bikes and I’ve got bikes that were ordered in November that only just arrived last week and that shipment is all pre-sold.

“There is definitely a shortage still but it just depends on your needs and what you are after.”

In May 2012 the federal government adopted the European standard for e-bikes, allowing their import but it wasn’t until 2017 that every Australian state and territory had consistent laws.

Under the rules, e-bikes can run a 250-watt motor activated by a pedal-assist system with the motor limited to 25km/h.

Pearce said e-bikes were very popular with over 50s who wanted to keep riding but no longer had the energy they once did.

“I sold a bike to a gentleman who is 78 the other day and he just wants to be able to keep riding with his mates as a road rider,” he said.

“We sell a lot of mountain bikes to people just for recreational riding but serious mountain biking is also a growing segment – people can still ride fast down a hill but get back up easier.

“Folding bikes are popular with caravanners and commuting bikes have had a huge increase in popularity.

“A big chunk of the bikes we sell are for people getting out of a bus or a car and riding to and from work – it’s an incredibly cheap form of transport.”

The sales surge has led to a number of new e-bike shops popping up around Adelaide as well as an increased focus on e-bikes by traditional retailers. 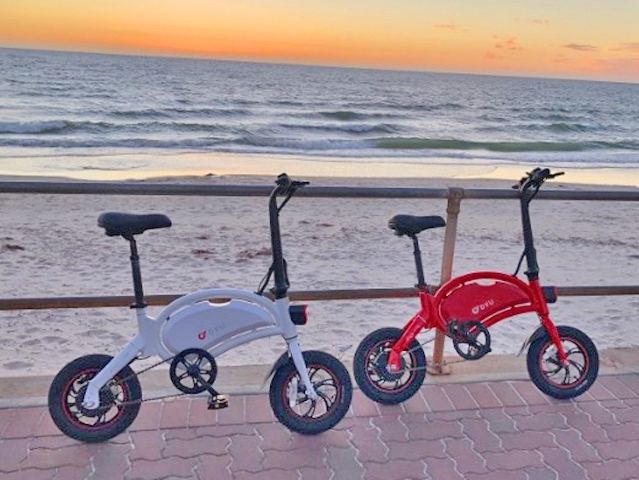 DYU Australia has opened a shop in Mawson Lakes for its folding e-bikes. Picture: Supplied

They received their first shipment of 250 DYU electric bikes just before Christmas and opened their Mawson Lakes store in late January.

Barry said the business had been set up in Mawson Lakes to target university students, commuters and the area’s apartment lifestyle.

“We believe the COVID period has brought to life people looking at ways to change up how they travel, how they transport themselves to and from work and we see an advantage in having a smaller e-bike that can accompany people on the train or bus and can fit in the boot or back seat of basically any car,” he said.

“It’s got a good price point and we’re not trying to go after the cycling market as such, we’re more going for a smarter and a cheaper way to transport.”

Barry said although the business model was initially set up to target commuters, the foldable e-bikes were proving a hit with grey nomads.

“I have sold over 30 bikes in the last three to four weeks and 90 per cent of them have gone to people with motorhomes, caravans and people who like to travel.

“People park up at the caravan park for the week and if they want to get into town or go to the pub these can accompany them.

“We’ve really seen a push from the 65+ age group – it’s been a huge surprise but 90 per cent of our customers are retirees who are on the road.”

DYU Australia is aiming to take delivery of another 500 e-bikes from Chinese parent company F-wheel mid-year and is in talks with a potential re-seller in New Zealand.

Barry said marketing campaigns to target the commuter market would begin this month.

“The commuter industry is a very broad one – uni students, people who don’t want to run a car, those who live in apartments – so how you narrow it down to target that market specifically has been quite a challenge,” he said.

“We think it’s going to still be a big part of our business but it’s just taking a while to get the message out to the right people whereas the caravan and camping market is a lot easier to target.”

According to Bicycle Industries Australia figures, overall bike imports into Australia in 2020 reached a record 1.45 million, eclipsing the previous record of 1.4 million in 2007.

BIA general manager Peter Bourke said this was despite the January to April 2020 period being the second-lowest for bike imports in the past 20 years. From July to December there were more than a million bikes imported for the first time in a six-month period.

Bourke said while the overall bike industry was booming, e-bike growth was far outstripping the growth in regular bike sales.

“The sports e-bike market has grown dramatically but what we are seeing is a lot of people are now using e-bikes who were going to otherwise stop riding altogether because they got too old or too injured and we’re also starting to see strong growth in people choosing to replace a car with an e-bike,” he said.

“Right now, the only thing that is holding the Australian market back is the worldwide demand for e-bikes – as Europe grows, as America grows that’s putting pressure on the supply chain.”

He said health research had shown that e-bike riders were still doing 85-90 per cent of the exercise compared with a normal bike.

Haag said e-bikes were also proving popular with delivery companies such as DHL and Domino’s Pizza.

“While we’re looking at booming recreational use of e-bikes, underneath that the big tsunami is going to be how industry is going to use these sorts of products to deliver goods and services,” he said.

Media diversity is under threat in Australia – nowhere more so than in South Australia. The state needs more than one voice to guide it forward and you can help with a donation of any size to InDaily. Your contribution goes directly to helping our journalists uncover the facts. Please click below to donate to InDaily.