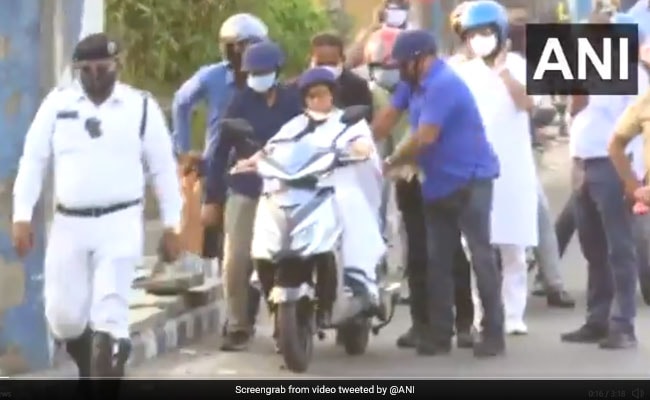 Ms Banerjee was riding an e-scooter to travel to her residence in Kalighat from state secretariat ‘Nabanna’ in Howrah as a mark of protest against the fuel price hike. However, she quickly regained her balance with the support of the security personnel and continued the ride.

#WATCH | West Bengal CM Mamata Banerjee nearly falls while driving an electric scooter in Howrah, as a mark of protest against fuel price hike. She quickly regained her balance with support and continued to drive.

She is travelling to Kalighat from State Secretariat in Nabanna pic.twitter.com/CnAsQYNhTP

Earlier today, Mamata Banerjee rode pillion on an electric scooter to reach Nabanna from her residence at Kalighat in Kolkata. With a placard protesting against the petrol price hike hanging around her neck, Ms Banerjee sat behind a Trinamool Congress leader who rode the battery-powered electric scooter.

Over a period of time, the prices of petrol and diesel have increased sharply in the country. Opposition parties have held protests in different parts of the country over the fuel price rise.

(This story has not been edited by NDTV staff and is auto-generated from a syndicated feed.)