After storming up vertical zigzag gradients in turbo gear, the only thing that I could mutter was: ‘Alleluia!’

But I wasn’t the slightest bit tired. Indeed, thanks to my magical electric bicycle I had barely broken out a sweat.

These e-bikes have become exceedingly popular, and I can understand why. 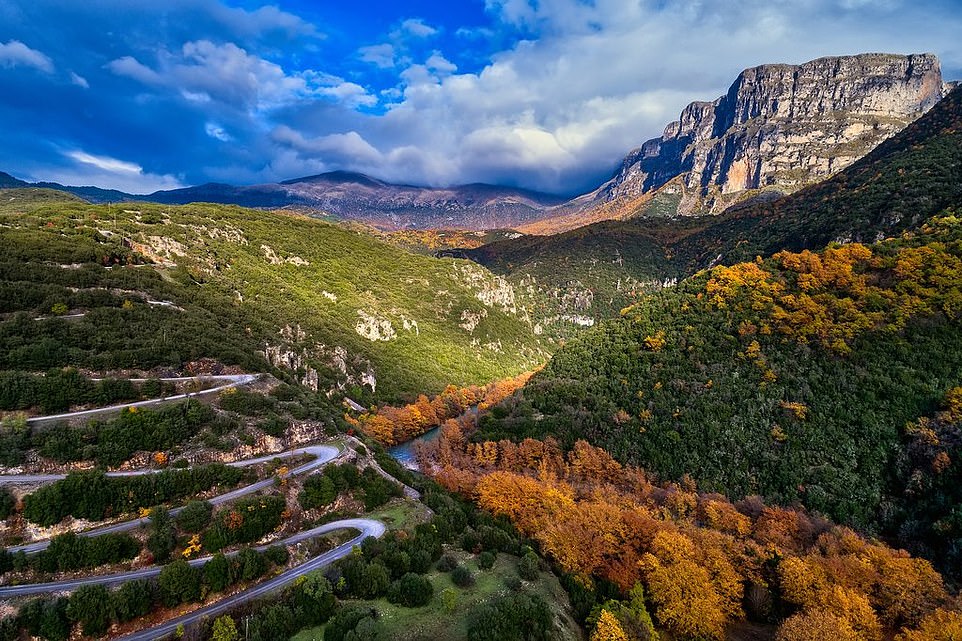 Breathtaking: Switchbacks like these in the Vikos gorge can be easily tackled on e-bikes

Over the course of five days we covered 120 miles of mountains and forest in Zagori, north-western Greece, close to the Albanian border.

This is wild, remote and empty territory, inhabited by elusive wolves and bears.

Slashed through its heart is the Vikos gorge, the second deepest in the world. When the rains come, it springs to life with a river, strewn with white boulders and smooth pebbles for skimming.

The holiday was led by The Slow Cyclist, and guests can either join a group or make up a private party.

We were three couples, all friends from Suffolk — middle-aged but reasonably fit. There was some competitiveness among the men; Adam out front swore he never used his gears. It’s a slick operation. English host Kitty took care of logistics, ferrying luggage and the first-aid box (yes, it was needed) from guesthouse to guesthouse in the support vehicle. Lefteris, from Zagori, led us, filled us in on the local gossip and shooed away the bouncy shepherd dogs, while historian and Grecophile Josh kept up the rear.

Our days were well-planned, and the itinerary criss-crossed the gorge.

We alternated between going by foot and bicycle, stopping to admire the many slender, humpback bridges built by master craftsmen in the 19th century.

Lunches were included, as were other refuelling pit-stops. We felt like royalty, never having to put our hands in our pockets when we paused for a Mythos beer or ice-cream after bowling along the near-empty roads. 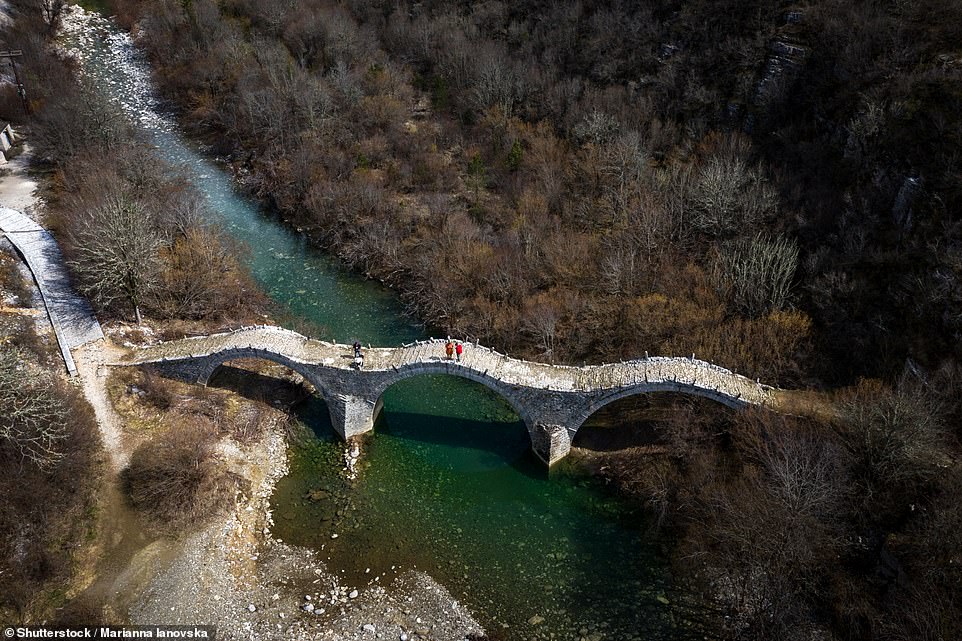 The Daily Mail’s Clare Mann covered 120 miles over the course of her five-day tour. Pictured is Plakida Bridge near the village of Kipoi

When we got to the village of Fragades we spent our first night in a guesthouse with windows painted blue, a garden of autumn vegetables and a terrace hung with ripe grapes.

From the wrought iron balcony, we looked over slab roofs, steep alleyways and stony mountains. We ate a hearty dinner: stuffed peppers, lamb chops cooked with thyme and lemon, and a platter of marinated figs, all enjoyed with local wine. I slept soundly, and was woken by distant cowbells and rain.

The clouds parted and the sun soon came through, however, as we stopped at the village of Negades, which has a mighty plane tree in the square. 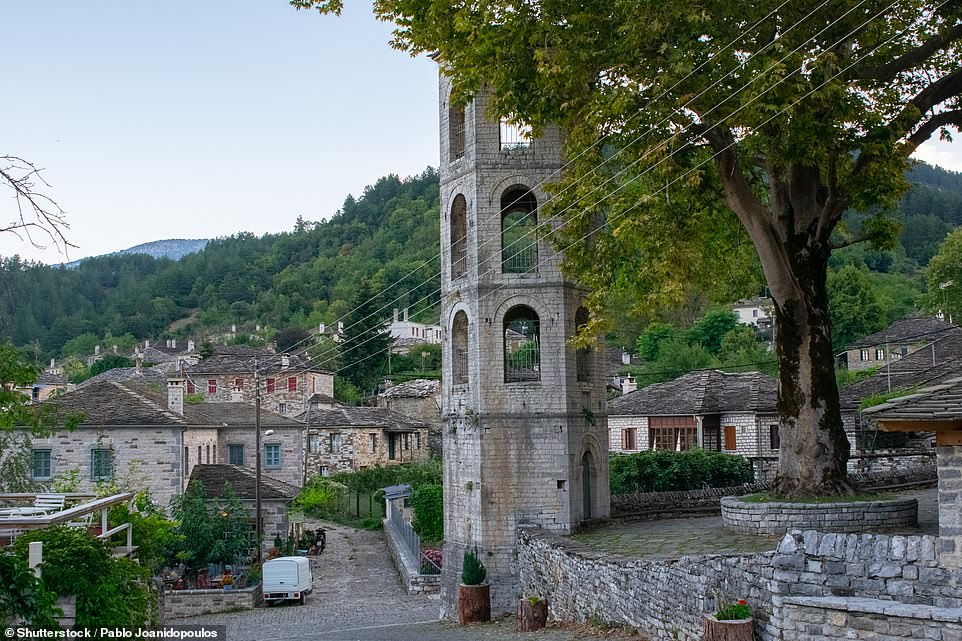 HOW WE’LL BE WELCOME IN MAY

Greece is set to welcome British tourists who have been vaccinated as early as May. The Greek authorities are planning to waive quarantine restrictions for those who have received two doses of either the Pfizer-BioNTech or OxfordAstraZeneca vaccine, according to The Times. The two million British tourists who visit Greece every year, spending more than £8.5billion, are vital for the country’s economy. Discussions between UK government officials and Greece’s ministry of tourism regarding what form of proof of vaccination British tourists will need to show are ongoing. Holidaymakers will also need to provide evidence of a negative test taken less than 72 hours before their arrival in Greece.

We all failed to guess the population — just two. Yet a tiny cafe materialised with a fire in the grate, and we warmed up with its herb tea and orange cake.

The cloistered Romanesque church of St George here is the most beautiful in the region. Inside, elaborate gold leaf lit up the gloom and illuminated the paintings, which covered every inch of the walls.

After some 12 miles we were hungry and stopped at another hillside village, Kipoi.

In the afternoon we walked along well-marked trails, enjoying the scenery but passing some sorrowfully closed schools. With fewer than 2,000 people now living in the region, the older population laments the lack of young families.

I generally preferred to walk in the mornings, cycling gently on my e-bike after lunch. There was a surprise each day — an elaborate picnic, a guitar serenade, a wine tasting. In Elefatopos we met a weaver, Lena, whose house was strung with vegetable-dyed silk and wools.

She fed us hogget, or ‘teenage lamb with attitude’. It was difficult to refuse the rosé wine as we soaked up the sun.

After a farewell slug of tsipouro (a Greek spirit akin to grappa), my husband came a cropper. He took a corner too fast. Kitty bandaged him up and put him back in the saddle, just as Lena nearly ran us down, hair and amber scarf streaming in the wind, arms outstretched.

Zagori women are tough, from centuries of keeping the show on the road while their husbands worked abroad, sending back money to build their handsome, solid houses. In Ano Pedina, we stayed in Porfyron, a guesthouse painted red. It is owned by a Dutch woman married to a Greek.

Their son studied icon painting with a nun in the village’s monastery.

Our final night in Papingo (the most touristy of the villages we visited) was a wild celebration of Zagorian music and dancing.

We were swept away, led by Yannis on the clarinet, who was accompanied by an accordion and a tambourine. Ears ringing, limbs aching, hearts racing, we pleaded for more.

But Yannis shook his head and begged for mercy. He had run out of puff.

Despite a little cheating (using ‘turbo’ mode on my e-bike rather than ‘economy’, ‘touring’ or ‘sport’), I glowed at the end of our five-day trip, and my muscles were toned.

Indeed, I think I could have done the whole circuit again on a pushbike.

The Slow Cyclist (theslowcyclist.co.uk) offers private or group cycling and walking holidays from £1,595 pp full board in traditional guesthouses from May to October. Electric bicycles are £100 extra. Transfers included but not flights. London to Preveza from £64 return (easyjet.com).