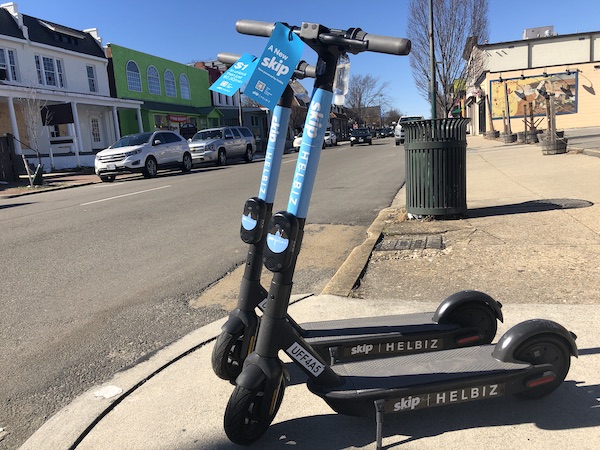 Helbiz recently announced it would introduce 500 e-scooters to Richmond. Here are two of the company’s scooters parked in Carytown. (Mike Platania photo)

Bird and Bolt have some new competition in Richmond.

In the coming weeks there will be hundreds of blue and black on-demand, rentable electric scooters on the city’s streets courtesy of New York-based Helbiz.

The rollout began this week, and scooters could be seen parked in Carytown Thursday.

“We were awarded a one-year permit for 500 e-scooters and due to the weather, are in the process of gradually deploying the vehicles,” a Helbiz spokeswoman said in an email Thursday. “Our first scooters have been launched around Carytown and VCU, while the rest of the 500 devices will be rolled out in the coming weeks.”

The company joins a growing field of similar operations in Richmond. Bolt Mobility was the first official e-scooter startup to come to town in June 2019. Bird’s local operations formally launched in October 2019, after the company’s controversial unannounced arrival the previous year caused a ruckus that led to City Council’s creation of a scooter permit system.

Helbiz launched in 2016, and operates e-scooters, e-mopeds and e-bikes in more than 30 cities across the globe. Riders can locate and rent e-scooters through Helbiz’s mobile app.

The company has a heavy presence in Rome and Milan. In the United States, the company operates in D.C., Alexandria, Arlington, Miami and Atlanta, the spokeswoman said.

In its announcement of the Richmond expansion, Helbiz said it would launch the Helbiz Apprenticeship Program, which would provide career training, as well as the Helbiz Access Program, which provides discounted rides for low-income people, among other community initiatives.

The company, which recently acquired San Francisco-based Skip, an e-scooter company that operated in Washington, D.C., also said each scooter is equipped with hand sanitizer, and are cleaned “multiple times a day” as precautions against the coronavirus. The pandemic briefly scared Bird off of Richmond’s streets as rentable scooter companies grappled with how to keep the devices clean and safe.