It is not news that Ola has been working on electric vehicle of its own for a while now. After all, the ride hailing service provider has made proclamations about setting up the largest scooter factory in the world after it signed a Memorandum of Understanding with the government of Tamil Nadu. So, you know, work under progress and all that. But so far, besides the statements about the upcoming e scooter and its factory, we hadn’t really seen any other measure of progress. Well, it is here now — we finally have images of the upcoming Ola electric scooter on a test run in India. From the looks of it, it appears to be the AppScooter — from the stables of Ola’s Dutch acquisition Etergo.

Though there isn’t an abundance of official details about the AppScooter — word has it the Indian electric two-wheeler manufacturer’s take on the AppScooter will feature banana-shaped battery packs that can be concealed under the seat as well the rider’s feet. Another USP of this upcoming electric scooter in India will reportedly be the under-seat cargo space — reports claims it will offer an incredible 50-litres of storage space. 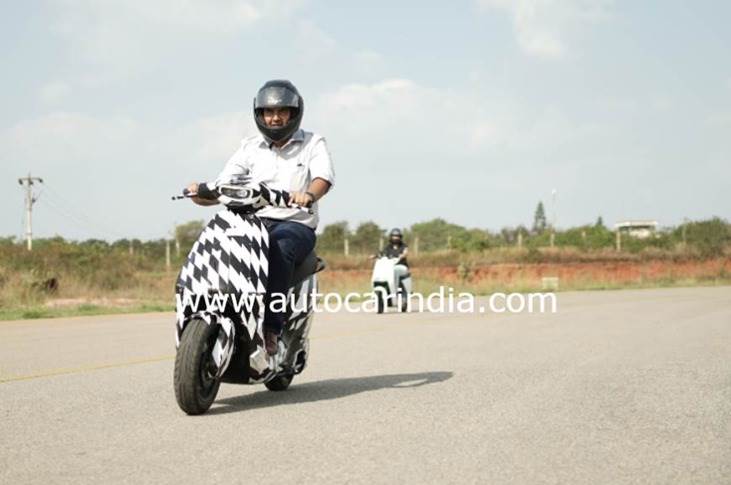 Now, considering that Ola will be looking to carve a niche for itself in the e scooter segment, which continues to become more and more competitive by the second, its upcoming EV will obviously come loaded with plenty of modern technology and gadgetry. So, in addition to the run-of-the-mill provisions, also expect it to get vehicle connectivity features.

As for the mechanicals — well, it is claimed the Ola AppScooter could offer a top speed of 100 km/h and a range of 100 kilometres per charge. That would make it quite an interesting offering in the segment, no?