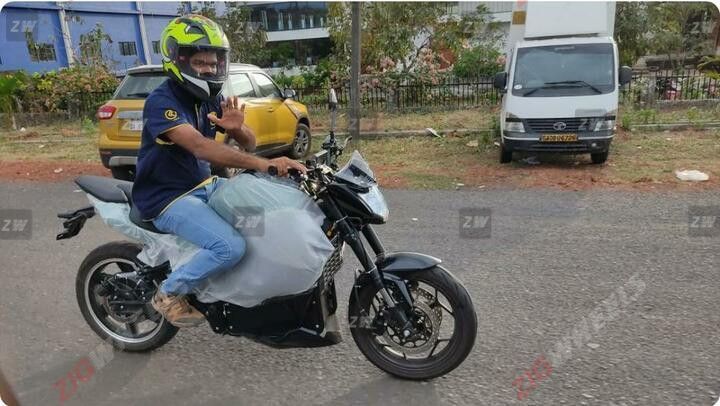 Kabira Mobility, a Goa-based startup, was recently spotted testing its upcoming electric bike, the KM 4000. Last year, the manufacturer had showcased its fully faired offering, the KM 3000, at Auto Expo 2020. The KM 4000 will be a naked iteration of the 3000 with the same powertrain and similar features.
While parts of the test mule are covered in plastic, several things caught our eye. For instance, the mule uses a headlamp similar to the Yamaha FZ, and the bodywork reminds us of the Tork T6X electric bike. The rear-end looks chunky too and adds to the muscular appeal of the KM 4000. LED lighting is expected at both ends.

Further, the photos also reveal a rear-wheel mounted motor linked to a battery pack, probably present under the fuel tank. Expect the KM 4000 to use the same powertrain as its faired counterpart. This includes a 3kW motor and a 3.44kW lithium-ion battery, capable of offering around 90km of range and a top speed of about 90km/hr. This is equivalent to the performance of a 110cc petrol offering. Another e-bike with a similar power output is the Revolt RV400, and it’s definitely the bike to watch out for in this segment. Here’s our ride review of it.

Other notable things include disc brakes at both ends, twin-discs at the front, and chunky USD forks. Coming to the features, the e-bike is expected to pack a fully digital instrument cluster, smartphone connectivity, anti-theft alarm, and possibly a dedicated app, just like its faired sibling.