Actually, it’s a new model of bike, based on the Cake Kalk platform, developed in collaboration with anti-poachers (so that it would best suit their needs and the work environment) and Goal Zero, which provides the new bike with solar kits. The Cake Kalk AP (Anti-Poaching) is a solar-powered electric bush bike and it’s already available for pre-order.

The Southern African Wildlife College (SAWC) will receive the new bikes for use during anti-poaching raids, as part of its educational program. Poaching remains one of the leading causes of species extinction and, according to the SAWC, it’s usually motivated by a scarcity of resources and hunger.

Moreover, the areas with the highest poaching rate are isolated and lack proper road infrastructure, which means rangers already using dirt bikes have to rely on fuel brought in by truck or helicopter at rare intervals. If that wasn’t bad enough, poachers hear the roar of the engines from afar, which gives them ample time to pack up and get lost.

Cake bikes will silently creep on them and catch them in the act, while doing away with the reliance on fossil fuels. The new Kalk AP is powered by the sun, thanks to the mobile solar kits by Goal Zero, so it can be charged on the job, in between rides. Its software and hardware has been tweaked to adjust to the hot temperatures of the African bush, and the motor is sealed and fully submersible.

With front and rear suspension, the Kalk AP rides on Cake’s 18 x 1.85” rims and 3.5” Continental TKC80 off-road tires, and comes with integrated lights and fenders. The motor peaks at 11kW and the 50A / 2.6kWh battery is good for 3+ hours of riding time. Like Kalk, the Kalk AP has three riding and three braking modes, and can reach a top speed of 56mph / 90kph. It also comes with connectivity through the Cake Connect app.

The Cake Kalk AP is available for order, on an order-one-send-one-to-Africa basis. Basically, if you want one of these electric bikes, you have to make a €1,000 ($1,210) pre-payment for a discounted €25,000 ($30,242) bundle that includes one bike for you and one for the SAWC, together with a solar kit. Deliveries for customers are scheduled to start in September 2021, while the SAWC will be getting the first units earlier, in May.

“Solar power, new technology, and a new category of vehicles that help save endangered species in Africa. This is a perfect example of purpose meeting sustainability,” says Stefan Ytterborn, founder and CEO of Cake. “We are extremely honored to be able to work with our partners on this initiative and to contribute to developing the means to help curb poaching in the region.” 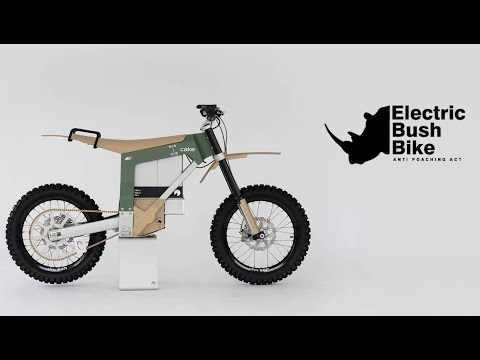