Super73 makes powerful e-bikes for offroad and urban use. By limiting the power on the motor electronically, they can also sell them to the European Union, where they classify as electric bicycles with 250W power and a top speed of 25 kph (15.5 mph).

Super73 describes its bikes a “crossbreed between an electric bike and a motorcycle,” in that they offer a product that’s road legal without a permit (an e-bike, essentially) but can be unleashed to its full potential (2000 watts of power) if you’re into offroading or are riding on a private road.

The RX is the top-of-the-line model, which is why it was chosen for this custom work. It’s a Star Wars-themed bike inspired by the iconic Tie fighter, a commission work for actor Rahul Kohli, best known for his parts in iZombie and The Haunting of Bly Manor. He is an avid Star Wars fan, and he is credited as a collaborator on this custom bike. Whatever his part in the build was, it’s not explained in detail. 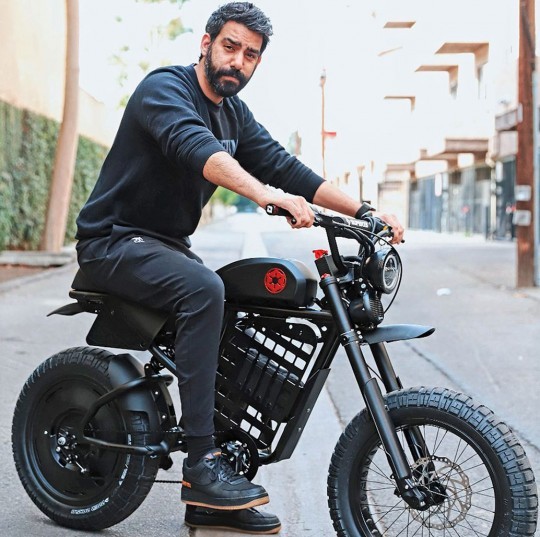 To resemble something out of the Star Wars universe, even if it can’t fly, an all-black matte theme was chosen for the e-bike. After all, it had to be menacing and have an industrial feel to it. Red was used for contrast, like in the “Imperial cogs” added to the battery case and the red LED underglow lighting.

Saddlemen Seats designed an all-black, ribbed, full-grain black leather seat. It was then further customized by adding Kohli’s initials along with the roman numeral 13, which happens to be his favorite number (and Taylor Swift’s, a very funny coincidence). There’s also a stylized number plate in the rear.

For an even more sinister look, Super73 industrial designer Ian Chambers 3D-printed rear wheel covers, and for convenience, he added a milled panel that fills the center void on most Super73 bikes and allows Kohli to add modular bags and accessories. No room for a lightsaber on the bike, though. 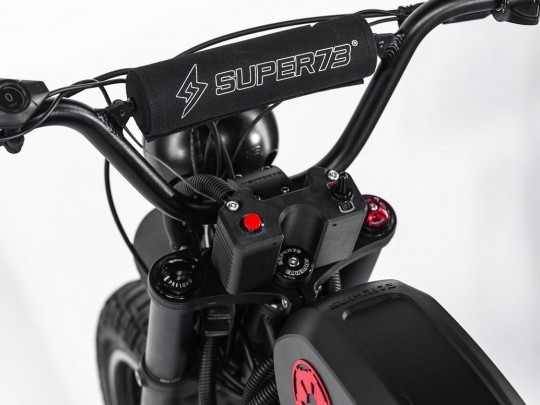 But Kohli can still pretend to be wielding one, thanks to the specially designed center console that Super73 calls “lightsaber technology.” It’s basically something that allows Kohli to play genuine speeder bike noises or even dialog from the movies, through the speaker hidden underneath the bike, or honk the horn using legit Star Wars sound. This sounds like a very childish addition to an e-bike designed for rough riding, but it’s the kind of detail that makes a true Star Wars fan’s heart skip a beat in pure joy.

“That’s not weird buzzword marketing,” Super73’s chief marketing officer Michael Cannavo explains. “We connected with some of the top builders in the movie props business to obtain the advanced control board, motion sensors, and sound effects used by both Lucasfilm prop makers and diehard replica-collecting fans. Famous lightsaber prop installer, Jonathan Rossi, did the preliminary programming and SUPER73 lead engineer, Harrison Lu, ensured it communicated with the SUPER73-RX and was easy to use. Replica masters, Sabers Forever and Kyberphonics, came together to supply the two iconic sound fonts used for this bike.”

The video at the bottom of the page shows a more detailed look at this custom e-bike, along with footage of Kohli taking it for what is supposed to be the first ride. Naturally, his reaction to it was glowing: not only was he getting a custom e-bike, but he was getting something that appealed directly to his Star Wars obsession. 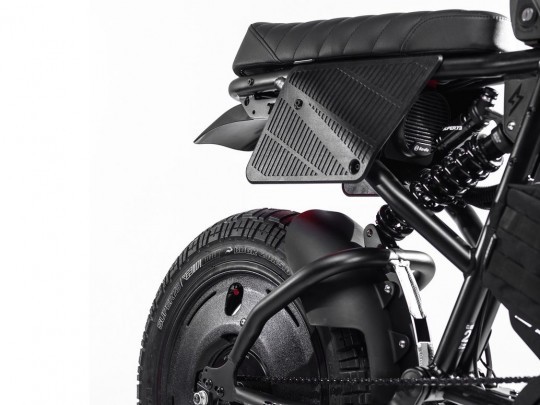 “I was floored by the style and design. It’s such a beautiful bike and once I turned on the electronics, I couldn’t believe what I was hearing. Riding with those sounds instantly brought me back to being a kid,” he gushes.

In traffic, it will probably get less than an enthusiastic reaction, but that’s an entirely different story. 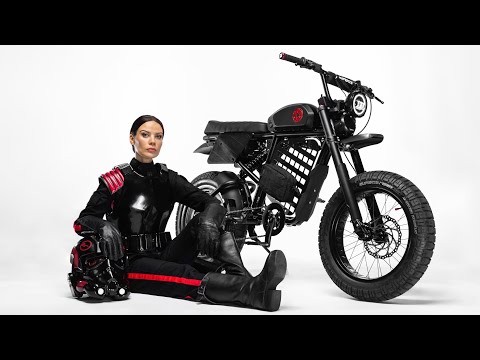